The Crimson Petal And The White: Subverting expectations

I directed a serial called The Devil's Whore, set during the English Civil War, for Channel Four a couple of years ago, which had a heroine haunted by the devil.

David Thompson, one of the producers of The Crimson Petal And The White, had liked that piece.

Years before, I had made an adaptation of Vanity Fair for BBC One, which had been called "costume drama for the MTV generation".

When he called, I guessed he wanted something a bit different.

We met. He said "We want it to be really different."

I said "I'm not sure about that. I can give it to you a bit different."

He said OK, thus saving BBC audiences from the spectacle of a post-modern novel about Victorian prostitution told through the medium of English folk dance.

In the way that Michel Faber, who wrote the book, set himself up against Victorian literature, continually borrowing its clichés but then subverting his readers' expectations, I thought there was an opportunity to set ourselves up similarly against TV period drama.

There was a chance to play with the grammatical elements of different genres. In the serial there are elements of documentary observation, sequences that are more classic and formal, bits that look like pop videos.

Episode three, for instance, has horror film references as Sugar finds herself in William's house, full of dark history, his wife semi-imprisoned by her doctor.

I loved Lucinda Coxon's script. It started with Sugar, a prostitute from the slums of St Giles narrating.

"You may imagine from other stories you've read that you know this world well - but those stories flattered you. You are an alien from another time and place altogether." 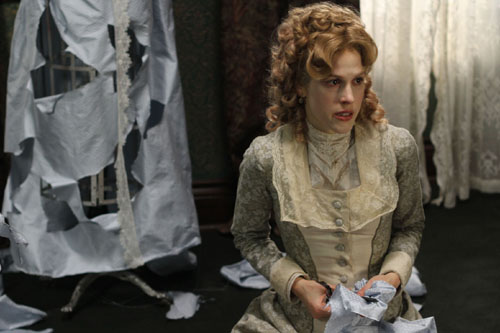 So there was the first challenge. Trying to create a world that was credibly Victorian but was unrecognisable from any cosy historical world we had seen on TV before.

I imagine that St Giles, the slum where Mrs Leek's brothel is situated, was a hellish place. I was afraid to portray it as anything less - dangerous, unsanitary, desperate.

I was struck, when travelling in India, by the way that the grand spaces of the old imperial world - Edwardian New Delhi and Victorian Calcutta - had been appropriated and colonised by its modern inhabitants, divided up and adapted for their own use, bits built on and carved up.

That became the starting point for our vision.

We filmed in the courtyard of Manchester Town Hall - a Victorian gothic cathedral-like space - and brought in tons of mud, built slums and open sewers within it - colonised it ourselves.

Gustave Doré's illustrations of London, where the light barely makes it to the ground through the narrow chasm of terraces was another reference.

The Crimson Petal is a piece that deals with the mechanics of prostitution. It's not Pretty Woman. I like the fact that Sugar's motives are opaque and puzzling.

The sex is transactional and less interesting in many ways than the base things Sugar puts her body through.

Romola Garai, who plays Sugar, was unflinching in her depiction of that. 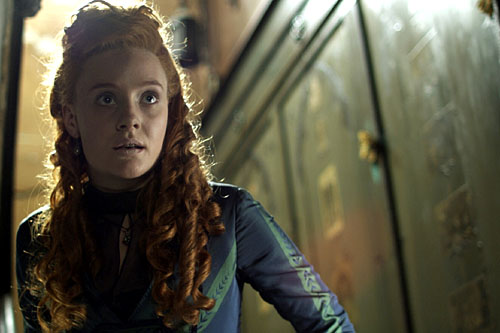 William Rackham, the protagonist who is besotted with Sugar, is a spoilt boy and a fool. He's a would-be writer who hasn't written anything except an unpublished small pamphlet and is resisting participating in his father's business.

To follow him, I felt that you needed to put that foolishness in a comic context, otherwise you'd lose interest in him.

I am in awe of comedians. There is a different creative energy that's present on set with a comedian, a risk of anarchy that I love.

I'd seen Chris O'Dowd in the film Festival and in Vera Drake. He's just got this incredible charisma and charm. He came in to see me and just made William really human in his foolishness.

As a director you're a bit like a conductor of an orchestra.

It's your job to have a clear and vivid dream for the film and be able to communicate that in a very concrete way that people can respond to.

You need to inspire all those heads of departments - production design, sound, costume, make-up to embrace your vision.

I like to push and push people to come up with more extreme ideas to the point where the ideas don't work.

Either that or they lose their temper and hit me.

Then I get them to rein in the ideas to the point where they do - that's the way you get interesting work.

Marc Munden is the director of The Crimson Petal And The White.

The Crimson Petal And The White is on BBC Two and BBC HD at 9pm on Wednesday, 6 April. For further programme times, please see the upcoming episodes page.

Listen to a review of The Crimson Petal And The White on Radio 4's Front Row.