Years ago my Dad gave me a Michael Dibdin book and told me to read it. What I most enjoyed about it was the loving detail and description of life in Italy - it's almost as if Italy is a huge character in the novels. I tucked it away in my memory.

The success of the first series of Wallander, made by my independent production company, Left Bank Pictures, made me think about what other 'foreign' detectives there might be around that we could develop.

I liked the form of the 90 minute TV film - it feels special - and I liked the idea of developing a second upmarket detective franchise for the BBC that would sell potentially around the world.

There were a few existing Italian detective franchises that we could have picked on but it was the Michael Dibdin books which most intrigued me.

Dibdin died a few years ago and though he was not Italian, he lived there for years and clearly adored it.

All his stories are loosely based on real stories and he captures remarkable qualities of its culture and customs. We've tried to ensure that our series has similar insights and reflects the reality of life in Italy.

And since the British love Italy for the food, the beautiful scenery, the sense of style, the history of the country and its stories, I checked on the rights to the books.

They were available although there was another company - an Italian one - chasing the agents for them.

We made a quick decision and went for it. But it wasn't a slam dunk. I knew that the books had been 'optioned' several times before - that's when production companies buy the exclusive rights for a specific time period - usually 12-24 months.

If and when the series is successfully made there's a further payment to the author or, in this case, the author's estate. Despite quite a bit of investment in scripts Aurelio Zen had never made it to the screen. 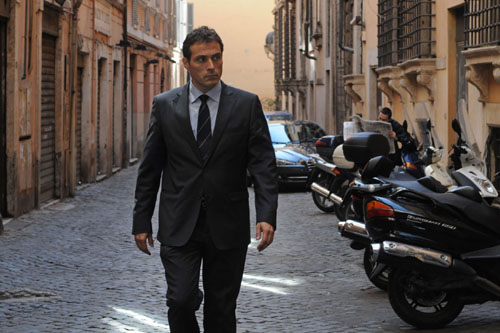 So there was the challenge: to boldly go where others had tried unsuccessfully before. We had to get it right and we had to ensure that we could raise the money to get it right. They were going to be expensive films to make.

It is an ambitious series and it's my job to help create the series, pull the team together and help lay out the blueprint with the main writer.

But perhaps the most important part (along with Marigo Kehoe, Left Bank's managing director) is to raise the money.

We started with the BBC who loved the idea. After they had committed to about 40% of the potential budget, we set out to find the rest.

After several recces in Italy to work out where and how to make the series, we were able to convince three more media companies from Italy, Germany and the US (Mediaset, ZDF and WGBH respectively) to join us in making the programme.

Around the time I was thinking about this show, I went to see the Tom Stoppard play Rock'n'Roll. As soon as I saw Rufus Sewell on stage I knew he was the one to play the lead, Aurelio.

I didn't know him personally but I've always loved his work. He's very handsome, and rather hip, and has great range as an actor.

He also has tremendous warmth and humour and brings these great qualities to the role of Aurelio. He just seemed perfect in every way and his time is now.

was our first choice as the female lead Tania and luckily she loved the project and was free to do it. The first director John Alexander, Rufus and I flew to Milan to meet her.

I felt very strongly that we should cast an Italian actress in the role of Tania if we could find the right one. She was it. She is hugely talented, very funny and gorgeous. So that was the casting.

It's always a huge move to decide on a writer for a series and I spent several weeks thinking about this at the start of 2009.

A friend had recommended Simon Burke to me and I knew he was a great adapter of books. What I didn't know was that he had abandoned his life in south London and moved to Umbria with his family.

So Simon shot to the top of my wish list. I rang him and told him of my ambitions. Brilliantly, he saw the same mix of drama and comedy in the books that had excited me.

As soon as I read his first draft of his first script I knew he was the right choice. I loved it and so did Rufus. We were all seeing the same show.

As with the Wallander novels, we've updated them to make a contemporary series. I think there is a real similarity between the writing of Henning Mankell and that of Michael Dibdin.

Just as Mankell's novels tell you a huge amount about life in Sweden, Dibdin's do the same for Italy.

Everyone who reads Dibdin will have an idea of how Zen is - how he looks, reacts etc.

Novels and TV films are very different forms of entertainment and we can't please everyone but I do think that Michael would have been very pleased with the choice of Rufus Sewell as the detective.

Some of the stories have been changed of course, but that's inevitable. Michael Dibdin's wife (novelist K K Beck) was very keen that we keep to the spirit of Michael's work and we have been very keen to do this. I think we've pulled this off.

I met his daughter recently, who is a journalist. She liked the first film very much and I was delighted.

Andy Harries is the executive producer of Zen.

Zen is on BBC One and BBC One HD on Sundays at 9pm. The first episode is available on iPlayer until Sunday, 23 January.