Jim Moir (aka Vic Reeves) and Victoria Wood star as Eric Morecambe's parents in the one off drama, Eric & Ernie.

Victoria Wood is also the executive producer of the programme. It was her idea to focus the story on the pair's boyhood friendship when they were child performers in variety shows, and their efforts to get established in the mainstream.

I got a quick chance to ask Jim about his part in the production.

How did you come to be involved in Eric & Ernie?
My agent rang me to go for a reading with Victoria Wood. I didn't feel nervous. I got called back, and then I got a phone call to say yes, you're doing it.

Was it a laugh working with Victoria, or serious hard work?
It was pretty much work because things moved quite fast during filming, but we did go out a couple of nights. We did some people-watching which was quite good fun.

Which is your favourite Morecambe and Wise sketch?
I seem to remember seeing one years ago when they were watching Frank Sinatra from the side of the stage doing a song. It made me laugh a lot.

Did you like wearing the vintage outfits?
It was like a busman's holiday for me. I could have taken my own wardrobe! [laughs] I like doing period stuff, especially the 1930s.

What was the hardest bit of production?
Nothing really, because it's fun. I think if you like what you're doing, it's not hard. Don't know if acting is hard. I think if you think it is you're in the wrong profession.

What was your favourite moment?
Probably the first scene I filmed when it was torrential rain. Me and Sadie [Eric Morecambe's mum, as played by Victoria Wood], we had to do a tender scene on the bench and then sun suddenly came out. [See video above]. It was the most brilliant sunset. It heralded the rest of the production for me. It was just a great moment. 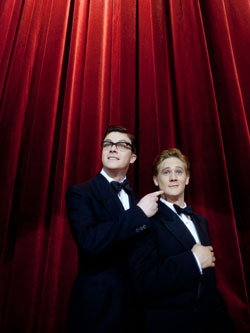 What touches you the most about this story?
I suppose it was three parts - the Eric and Ernie story and my part as George, he was having to put up with quite a bit with Sadie being away, but he got his life back in the end.

The scene where George and Sadie are sitting with all the people in the area at their house watching Eric and Ernie in their first TV show, Running Wild, and they weren't very good.

I'm not sure if you'd call it touching but it's poignant. It must have been difficult for the parents to have invited the whole neighbourhood round and the show turns out to be a flop.

The film is like a very moving ballad, there are high points and low points. So when you stop crying, you started laughing.

Victoria said she wanted a man to write the script, to capture the authenticity of the men's friendship. What was your first thought when you read the script?
When I first got the script I looked at my part first and I immediately liked him, and then I read the whole story and I thought it was quite gripping and it moves along at a pace. Every word was right, there wasn't any point where I questioned it.

Eric & Ernie is on BBC Two at 9pm in England, Scotland and Wales and at 10.35pm in Northern Ireland on Saturday, 1 January.

It's repeated on the BBC HD channel at 10.30pm on Thursday, 6 January.

You can watch classic Morecambe And Wise clips on the BBC Comedy website.

Fiona Wickham is the editor of the BBC TV blog.