Garrow's Law is a show that I love and am very proud of. I've loved dramatising the trials to make history come alive and reading and using the trial transcripts, the words of defendants and prosecutors and judges and barristers, to hear that world as it was described by those who were there, experiencing it in that very moment.

However, turning the trials into drama wasn't simply a matter of going to the Old Bailey online archive and writing it up. In a compelling court case you need reversals and revelations, last minute interventions and the suspense of the judgement.

So, in other words, despite the historical resources at my fingertips I've had to make a lot of stuff up.

I knew nothing about Garrow until I started investigating him for the drama but then again, as I've discovered, neither did most of the legal profession.

Without William Garrow there would be no such thing as a courtroom drama. He made a drama out of the trial out of necessity really - those accused defendants in criminal trials had very few rights and their barrister could not get them a fair trial.

Garrow realised that if the law wouldn't allow him to defend his clients properly he'd use the only weapon available to him - by attacking and undermining those who prosecuted them.

His adversarial approach changed the criminal trial forever. He invented cross-examination as an art form and a way of exposing the corrupt motives of prosecutors, reward driven as so many were.

It's a difficult balancing act with Garrow's Law. We want to be historically accurate but dramatically compelling at the same time. The cases we dramatise all come from real events, real trials but we have necessarily used dramatic licence, using Garrow as a lightning rod through which to illuminate such cases.

For instance, in the first episode of series two, I have dramatised the case of the Zong - 133 slaves thrown overboard a ship. Those responsible for such a massacre were not prosecuted for murder but instead investigated for insurance fraud. 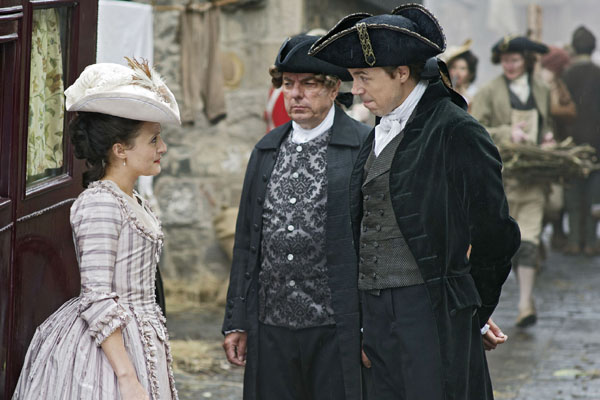 Not only was this a telling reflection on the status of black slaves (slaves were goods) but putting Garrow in the thick of it enables me to present such a grotesque and shameful history to viewers who might shy away from the same subject if it were a documentary.

I always wanted Garrow's Law to be a show that educated and entertained, using Garrow as someone whose work at the Old Bailey could tell us something new or too easily forgotten about our past and the rights he fought to gain.

This inevitably takes us away from a literal rendering of historical facts to an imaginative but truthful account seen through Garrow's experience. As we all know anyway, history is about interpretation.

My favourite moment in Garrow's Law is probably in the second episode of series one when Garrow suddenly turns to a less than honest witness and says, "Blast your eyes, you damned bitch!"

The courtroom is aghast at his sudden abuse of a woman until in the next breath he explains he is merely recounting an insult she's supposed to have suffered from the defendant. I love it when Garrow is playful, mischievous and deadly in court all at once.

Tony Marchant is the writer who created Garrow's Law.

Garrow's Law starts on BBC One at 9pm on Sunday, 14 Novemeber.