My inspiration to write Single Father

I'm excited about Single Father going out on TV but also a bit nervous and a bit protective. I haven't felt like this with other things I've written. Maybe it's because I've spent five years on it but also because I never tire of watching David Tennant, Suranne Jones and all the actors zinging the characters into life.

Then there are the children, who could make or break it, because if the family's not believable the game's up.

There were worries. I mean, how would they react to having Doctor Who as their Dad? Would they ever get over it? Would they forever be looking at David in wonder and awe? See what you think.

The story started to form nearly six years ago. I knew I wanted to write something around bringing up children but wasn't sure how to do it until I got some unintentional help from home.

We have three boys - at that time they were the same age as the children in Single Father. Like those kids they weren't allowed Xboxes, iPods, mobile phones, clothes with logos, virtually any television.

This ethos, which I agree with, was imposed by their mum, who one day looked at me and said "If anything happened to me, you wouldn't keep this going, would you? You'd give them everything they want!"

And there it was: Single Father, thank you very much. Except I almost didn't write it out of superstition, because to make a single father, I had to lose the mum and I didn't want to tempt fate. 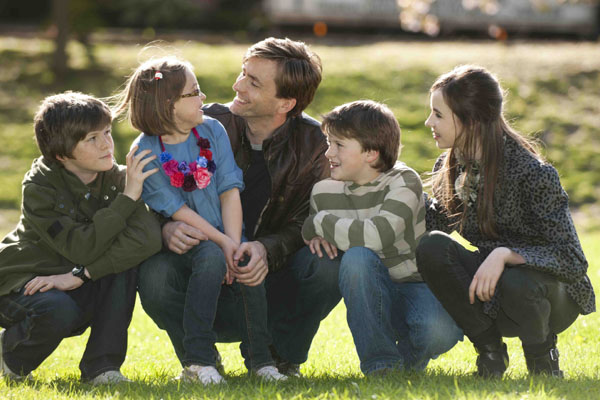 And maybe I wouldn't have written it if I hadn't had another nudge. I was down in Deal, in Kent, writing something else and overheard a story about a bandsman who was killed there in the bombing of the Royal Marines' barracks in 1989.

This bandsman's wife was working at the time in the café at the end of the pier. Because the wind was blowing off the sea, no-one there heard the blast, but at the exact moment her husband died, for no apparent reason, she blurted out "I love you too!".

And then felt an intense sense of warmth and wellbeing.

I couldn't resist that. It was a love story and that "I love you too!" contains everything.

There are no bandsmen or bombings in Single Father but that line's there and it echoes across the four parts.

I really hope you get involved with the characters over the coming weeks and enjoy the story.

Mick Ford is the writer of Single Father.

Single Father is on BBC One and BBC HD at 9pm on Sunday, 10 October.

To find out times of all future episodes, please visit the upcoming episodes page.