Our decision to commission a live rock climb, on a dauntingly imposing crag, in a highly remote location with no road access, in high definition (HD), was always likely to provide its own unique set of challenges.

However, receipt this week of the evacuation procedure and list of drugs to be available on site emphasised to me again just how different this will be from a traditional sports outside broadcast (OB).

The production is challenge enough. The location for The Great Climb at Sron Uladail on the beautiful Isle of Harris is stunning, but it's certainly not like organising coverage at a football stadium.

There's no road within an hour's rough walk, so no OB truck. Triple Echo, the production company making the programme, have had to arrange for Portakabins to be flown in by helicopter in which the kit will be assembled.

The production team will walk in and walk out. There's no mobile signal, so in an emergency it'll be a satellite phone or something called an emergency locator beacon, which I hope I'm not expected to operate. Then there's the weather. And the midges.

However, cutting-edge and groundbreaking as this may be, as far as I can see it's nothing compared to the physical challenge Dave Macleod and Tim Emmett are proposing to take on this Saturday. 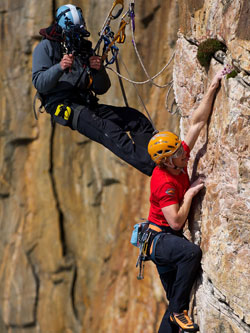 The cliff is over 200 metres high. It overhangs by about 50 metres across. To be honest these figures mean nothing to me either; you will only appreciate the challenge Dave and Tim face when you see them like tiny dots on the wide shot of the rock face next Saturday.

In short, it looks impossible and may well prove to be exactly that. We shall see.

We could of course have mocked something up that may have looked difficult to the untutored eye, but which was actually quite easy to climbers of this standard.

That wouldn't have been the same though, and I doubt Dave and Tim would have wished to be involved in the climbing equivalent of a cabaret act.

Yet if anyone can get them up there it will be Dave Macleod, a Scottish sporting phenomenon who would be a superstar if he operated in a more mainstream environment.

The sight of him and Tim pulling their full body weight up the rock suspended only by one fingertip is truly incredible and I recommend you do not miss it. A lot of shows promise drama, tension and excitement; hopefully on this one, weather permitting, it is guaranteed.

David Harron is executive producer of The Great Climb.

Photo above is kind courtesy of Triple Echo.

The Great Climb is on BBC Two (Scotland only) at 1.35pm and on BBC HD from 5pm this Saturday, 28 August. It is streamed live on the BBC Sport Scotland website and also available to watch in iPlayer after the broadcast.