Rev is a new six-part sitcom for BBC Two, written by James Wood and co-created with In The Loop star Tom Hollander. Tom plays Adam, a country vicar who's relocated to a parish in inner-city London, while Olivia Colman plays his solicitor wife, Alex.

Olivia talked to me just after she'd watched the completed version for the first time, to find out what it was like on the set of Rev, how she hoped it would be received and why comparisons to the Vicar Of Dibley are wide of the mark. 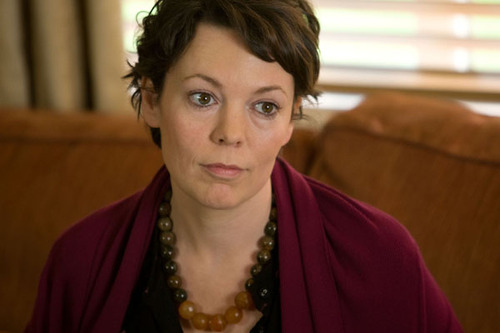 Can you tell us a bit about Rev, and your character, Alex?

Rev follows a vicar - an inner-city vicar, who's moved from the countryside - and the trials and tribulations of his very little congregation, and he and his wife. You know, normal stuff that shows he's a normal, human person - a married man with normal problems but also a dog collar.

It was lovely playing Alex. She's quite ballsy but they're both very good people - they're helping people in different ways.

I kind of felt that Alex thought that Adam made her want to be a better person because he really does turn the other cheek and try to see the best in everybody and she's maybe a bit more keen to just say "Agh, let's just go home!"

But she's lovely to play and they're a lovely, lovely couple. I mean, it's sort of from their back story. We think they met when they were quite young - before he went into the cloth - and she just followed him wherever he went because they're soulmates.

What were your thoughts when you first saw the script?

I really like quite dark comedy and I like the fact that it could stir people up. I don't think that's a bad idea, ever.

Some people are quite precious about vicars and vicars who can get erections [laughing]. But he's human, we're all nothing but humans and that's what I like about it, it really did deal with the humanity, the spit and dribble of everyday life. But you'd be disappointed it you're wanting the Vicar Of Dibley!

There's a great bit in the second episode where, in an effort to spice up their sex life, Alex walks into a supermarket dressed as...

Yes! That part had me in stitches. What was that like to film?

What were your impressions now that you've seen it properly on the screen for the first time?

I'm really proud of it - I loved it! Sometimes you watch things after it's been through the editing process and you worry that people have cold got feet and have wanted to jazz it up for an audience.

The original script was just so beautiful on its own, it was dark and there were gaps, you know, spaces for thoughts to happen - I sound a bit pretentious now - but what I love is they haven't tried to change it, they've just left it as it was.

It was called something different while we were working on it, and Rev really suits it. I much prefer the name, as it was originally called Handle With Prayer. Rev's right for it - it's snappy and modern. 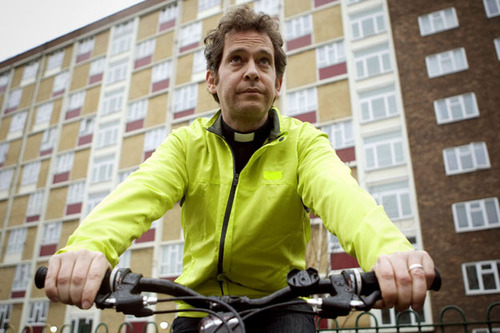 As you say, it's dark but it's also quite accessible to somebody who's come to it cold and likes mainstream comedy.

Absolutely! Because they're funny characters and Tom does funny - he can do it easily. And then there's his reactions, and you know that he's battling with his thoughts, and you can watch it all unfold. It's a classic comedy in terms of what someone does in an awkward situation.

How does your character progress as the series goes on?

They're always trying to find time for each other. What else? There's more attempting to have a sex life. And the fact that she says "Don't wear the dog collar in the bedroom!" I mean you would do that, wouldn't you? You'd say "Don't do that!"

There's a lovely episode where a friend of Alex's, who is a Muslim girl, asks if she and her Muslim friends can borrow some space to pray in the church. Adam's like: "Of course, of course," and then he's battling with how people feel about that.

It's like, "There are Muslims in my church!" You know, it's saying out loud everything what everyone thinks. Adam just goes, "Don't be ridiculous," it's just... it's great. 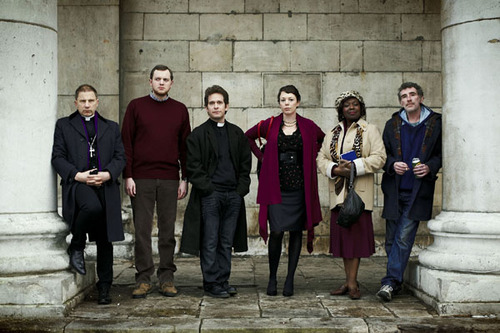 What kind of reaction are you hoping for when people see it for the first time?

I hope they're going to warm to the characters and love them.

Colin [played by Steve Evets] is a homeless smelly guy and you wonder are people going to love him? But he's lovely! And the fact that Adam might well be his only friend in the world.

There's one episode where he lets himself in, or he breaks in, we don't really know, and he has his morning dump in the downstairs loo of the Vicarage and you're not really sure how Adam and Alex cope with that!

But I hope the audience warm to these people and they want to know, I don't know... after seeing it they think, 'I want the people to do well in it. I hope they're going to be OK'. And I think these characters are strong enough and lovable enough that people want to get really involved. It's much more than a comedy about religion and vicars.

Gary Andrews is the assistant content producer for the BBC TV blog.