Boy George: What I thought of Worried About The Boy

Worried About The Boy is a new one off drama about Boy George's late teenage years. The story begins before he was famous, and tells the story of him leaving home in the suburbs and becoming a leading figure on the New Romantic club and fashion scene. It leads all the way up to him starting Culture Club and falling in love with Jon Moss.

Boy George spoke to me about how he felt about having a programme made about his personal life - and what he thought of the actors, the costumes and the make up. 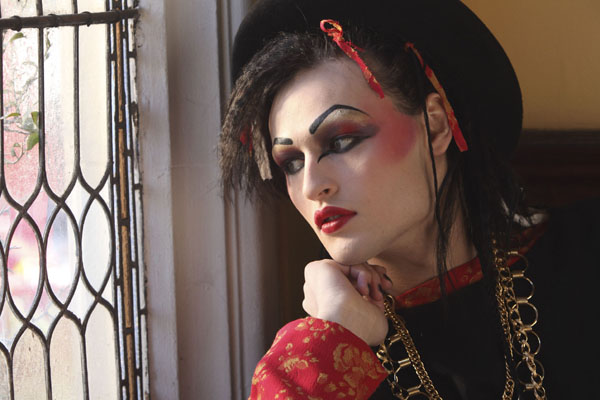 What did you think of the drama?

I watched it on my own to start with. I don't know what I was expecting it to be and I thought I might horrified but it really made me laugh.

I'm not particularly precious about the past anyway so I was never going to lose any sleep over it. But it's beautifully filmed and Douglas Booth is amazing. Somehow he has the stink of me! He just gets it. There's something about him that reminds me of me when I was 17.

There's a few bits of artistic licence. For example, my dad was a Cockney.

He was Irish, but he never spoke in an Irish accent so that was quite amusing to see that. But what's great about this is it's captured a really important part of history and that's great. I think it looks brilliant. Steve Strange looks like Caligula - he seems to come off the worst (laughing) but I was chuffed with it actually.

I liked the relationship between me and Marilyn, I thought that was really positive.

I agree, that was funny and a lot of the scriptwriting made me laugh.

My favourite line is where I'm with the guy in the phone box and he says I'm not really gay and I say, I'm not really a nun. I don't know if I ever did say that but I hope I did! It's quite bitchy.

And Douglas' make up is just beyond... I laughed my head off! I was like "Oh my God!" - they've done it really well. 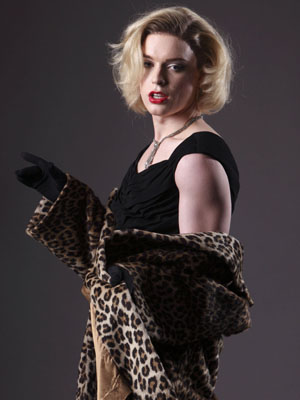 And he's quite beautiful too.

So it's a triumph. I was really impressed with his acting - and Freddie Fox too, I thought was really good at Marilyn. In fact I'm having a viewing of the film tonight and Marilyn's coming over with my friends to watch it. The real Marilyn.

I said to him, you won't like it! But you'll be pleased with our relationship in it. Because you know, he hates everything. (laughing)

But I'm really pleased with it, it made me laugh so much.

One of my favourite lines was from Marilyn, when Douglas (as you) says to him, why can I only pull straight men? And Marilyn says back, "Because you're really unattractive to gay men."

(Laughing) It's so true as well!

My relationship with Jon is quite reasonable in this film (laughing). Like when we split up in the end, I was thinking I don't remember it being all that reasonable in real life! It was more frenzied than that.

How did you hear about the film?

I found out about it from my friend who was asked to do the make up. So I called the BBC. I managed to get a few of my friends jobs on it so at least I knew the look would be right.

I was really worried they'd make it look too pantomime because the looks are so extreme and they were specific to people. That's what impressed me the most. Lots of the people who worked on the drama, in terms of the styling and make up and stuff, were people who were around at the time.

My friend Donald McInnes, he's the make up sort of designer and my friend Christine Bateman who does my make up, she worked on it as well. And a girl called Annie Symons who also was around at the time - so pretty good people working on it.

What was your first thought when you heard about them wanting to make a film about you?

I wanted to know what it was about, obviously and I did get the script and I kind of read bits of it and I thought 'Oh I can't be bothered.' It's basically true and there's obviously bits of artistic licence here and there.

Is that scene true, where your Dad is looking at your picture in a magazine and he's saying "So what have you all done? I don't get it. What are you called?" and he just can't get his head round your celebrity.

Yes that's true! Because I wasn't famous but I was getting a lot publicity for looking weird. My mum and dad... I would come home with these photo albums full of cuttings, or they would see me in the Daily Mirror, a fashion spread or I was on the cover of a German magazine. And they were like, well what do you do? You don't work, you're on the dole, you don't seem to get out of bed... how comes?!

Really, when I got the band together, they were so relieved, because it was like alright, now we know what he's going to do. But for three or four years they just did not understand my lifestyle at all. 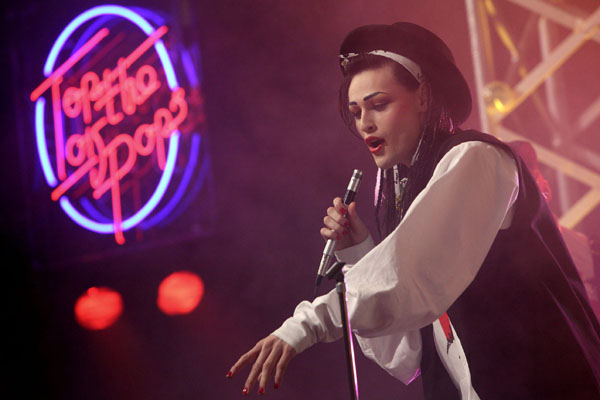 Your dad is portrayed as, although very blokey in the film, he's really accepting and understanding of you.

He was. My dad's dead now, unfortunately but he was amazing. When I came out, I thought he was going to kill me. Absolutely I thought I was dead. Over! Like I better say my prayers now.

And he was absolutely brilliant about it. I've always had their support in that respect and it was amazing to me that my dad was so relaxed about it.

So when you visited the set, you Tweeted about how good Douglas Booth looked and how you were looking forward to seeing the film. Did you talk to Douglas at all?

No I didn't talk to him about what he was doing. When I went up there was the day they were doing the extreme look with the yellow face and sticky up hair. I'd seen pictures of Douglas and thought, he's really beautiful but he doesn't look like me. But when I saw him in the gear, I was like Oh my God, he really does look like me! It's so weird!

We were in this room, we were having breakfast there and he was getting mic'd up and it was really creepy looking across the room thinking, he really does look like me.

Obviously he was playing me when I was 17 and I was a lot more feminine when I was younger. I've morphed into a more rugby type figure since I've got older (laughing) but when I was that age, I was very girlie and androgynous. And he definitely has that, even as a normal person, he has this sort of rock star look about him. 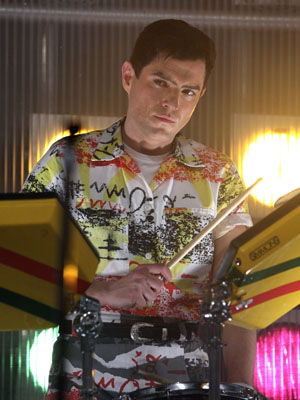 What did you think of Mathew Horne as Jon Moss?

Mathew talked a bit like Jon, I know he met Jon before he did it, and they had tea together. His mouth - he's really got Jon's mouth, the way Jon talks. Although Jon was quite posh, he used to talk a bit like that and play act at being a bit of a lad. Mathew must have studied it because he really did get it. I think Mathew's great in it actually.

How do you think back on that period now?

Well you know, they're dealing with certain aspects of it and they have a limited amount of time so you don't get time to really see relationships developing as such. Life is far more complex.

The obvious thing would have been to do a film about Culture Club. That sort of period really shaped a lot of people. It was a really exciting time, we were all living kind of vicariously, squatting, you know, living hand to mouth, kind of hedonistic.

But it was also a great time of discovery and personal discovery, sexuality... so many things were going on you know. And a time of great freedom for us as teenagers so yeah, I think it was an interesting time to choose.

And generally it paints a true picture of what happened at that time.

Fiona Wickham is editor of the BBC TV blog

Worried About The Boy premiered on BBC Two at 9pm on Sunday, 16 May and is available on iPlayer until Sunday, 23 May.

Worried About The Boy is part of BBC Two's Eighties Season