When my friend rang to ask me out for a drink, I was already in Heathrow Terminal 5. "I'm not going to be around for the next four months or so," I told him. "I'm going to Lagos."

His immediate reaction - "Why? What's wrong? Are you in trouble? Is it the police?" - was typical. Nigeria, and Lagos in particular, seems to have a terrible reputation in Britain.

Everyone thinks of it as a noisy, dirty, dangerous city, probably because all we ever hear about it on the news is the corruption, religious violence, and dodgy email scams. I was convinced there was more to it than that, which is why four of us were heading out there for such a long period of time.

Our insurers had insisted that we were met at the airport by a team of armed police men, who would escort us and all our expensive filming equipment safely to our hotel. I have never been so embarrassed in my life.

As our convoy sped through town, sirens wailing, blue lights flashing, it seemed to me that this was by far the best way to advertise our arrival to all the criminals in the city.

The next day, feeling sheepish, we dispensed with all policemen, armed guards and security advice, and decided to go it alone.

We were heading for the ghettos and slums, which make up three quarters of Lagos, to find strong characters who could would let us into their lives, and present them to an audience in the UK. We had no idea what to expect or how we'd be received.

First stop was the city's main dump site, Olusosun. This definitely isn't on the tourist trail of Lagos, but then Lagos doesn't have much of a tourist industry at the moment. Some 5,000 people work on the dump, and we were immediately struck by how organised and efficient everything was.

As well as all the scavengers working behind the dump trucks, grabbing anything and everything they could to re-sell to the re-processing factories, there were shops, bars, restaurants, a mosque, a barbers, and even a cinema. 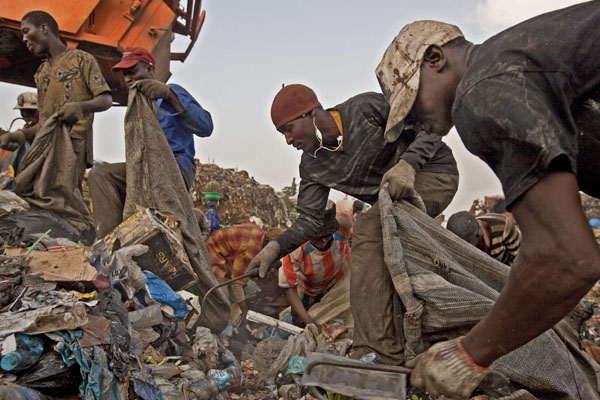 The longer we hung out on the dump (it very soon became one of our favourite places to film, because the people were all so friendly there) the more astonishing it became. It turned out that the scavengers even had their own form of democratically elected chairman, who sorted out any arguments or disagreements.

The dump became symbolic of everything we were trying to achieve in the films. It looks at first sight like a rough, lawless, dangerous place, and most people in this country will be horrified to see people working there.

But in actual fact, through the eyes of the people who actually DO work there, it's a well-organised place where there's good money to be earned. Decent, honest people choose to work there, preferring a life of grime to a life of crime. Some of them are university graduates.

They are proud of the fact that they earn an honest living, and are making a better life for themselves and their families through sheer determination and hard work.

We realised the scavengers were people to be admired rather than pitied, and it changed our whole perspective on the place. They didn't feel sorry for themselves, so why should we feel sorry for them? We decided that the films should celebrate their resourcefulness, and challenge our audience's views of what poverty is.

After the dump we went to Makoko, an extraordinary floating slum, where everyone travels round in boats. Some people call it Lagos's version of Venice. 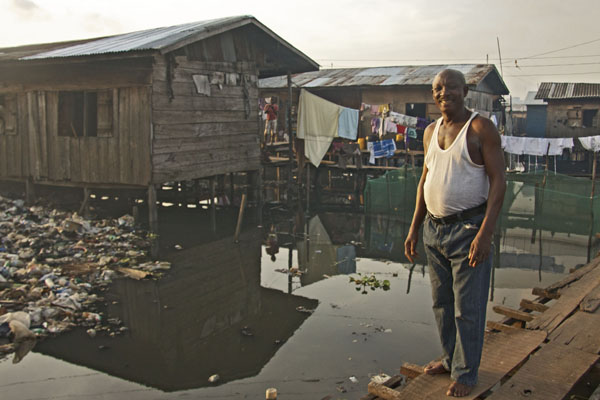 There's 100,000 people living on houses built on stilts, and after a week or so of drifting around in boats, stopping at people's houses and talking to them, we stumbled across Mr Chubbey, who went on to become the star of programme two.

He has 18 children to look after, and is always on the look out for some scheme or another which will help him make more money. He's like a character from Only Fools And Horses, buying selling, wheeling and dealing, doing dodgy deals and getting by on his charm and his luck. All that's missing is the camel skin coat.

The last film is set on a beach right in the heart of the swankiest part of town. It sounds idyllic - white sands, clear blue Atlantic waters, baking hot sunny days - and in many ways it is.

But it is also home to 1,000 or so squatters, who have built homes on the sand because they have nowhere else to go. After a couple of trips, walking along the sands, explaining what we were doing to the inquisitive children, we met Esther, a sparky, intelligent, beautiful young woman who had been staying on the beach for the last six years.

She lived with her husband Segun in a little house which they had built themselves out of scrap wood, cardboard and old tarpaulins. It probably cost them about £80. 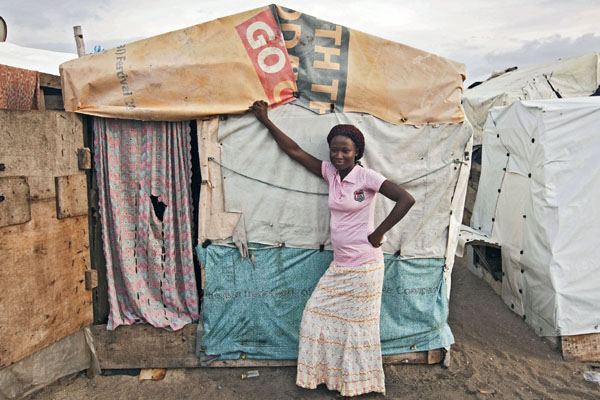 But when Esther and her husband started to have problems in their marriage, and it looked like they were going to split up, they used to have terrible arguments about who was going to get the house - every bit as vicious as they would be if they were living in a mansion in Beverley Hills.

We realised then that all our characters, wherever they lived, however extreme their working environment, went through all of the same things which we do in the West - love, heartbreak, marriages, births, deaths etc. It's just that they live on a different scale to us, in the slums of the fastest growing city in the world, and with no money. This forces them to be more resourceful, energetic, and optimistic than most people in the West.

And yes, they may be terribly poor, but that doesn't stop them being human and, if the films have succeeded, then I hope they've succeeded in showing that.

Will Anderson is the series producer of Welcome To Lagos. Welcome To Lagos is a three-part series on BBC Two, Thursdays at 9pm, from 15 -29 April.The first episode is now available on the iPlayer