Ashes To Ashes: From beginning to The End

Jim Morrison and The Doors there folks. The end is always beautiful to a writer. It means you've done it. It's finished. Story is told. Switch off the computer and go to the pub.

So am I forlorn, perched on a camera box on the edge of set on a freezing cold night in Roehampton, south west London as director David Drury shoots the last ever close up of Gene Hunt? No, I'm not. Sorry. Je ne regret rien as they say in parts of Somerset. The story is told. I think two of my toes have fallen off inside my boots and the icy camera box has put my bum under local anaesthetic but I feel... well... satisfied.

It is a hard but acceptable reality that shows will run and run not until the race is won but until the network blows the whistle and calls the event off. Usually between series. With Ashes we set ourselves the task of telling a three year story. This meant running over the line even if the cheering crowds wanted the race to carry on.

It may also have meant panting to the finish whilst the stadium cleared out early. Don't know why I'm sounding so cocksure - that may still happen. Stay in the stadium folks! It's neck and neck on the final straight, I swear!

Where did this story start? Not in Blackpool with Tony Jordan and Ashley Pharoah. For me, it started with Uncle John. He wasn't a real uncle; he was a drinking mate of my dad's, the kind you were made to call "uncle" in the 70s. He wore a camel-hair coat and smelt of fags and bitter and High Karate. He played darts and would say things like "Be a good boy Matty and pass uncle's Panatellas off the table."

In my world of boyhood fears and fantasies he was a rock of self-assurance, smelling of crafty pints and one hundred-and-eighty and masculine camaraderie. He was a god. And like all gods, I knew he would live forever. And that was Gene Hunt.

He wasn't called Gene Hunt for many years but when Tony, Ash and I were discussing our 70s cop show - Ford Granada - I realised there might be a context for Uncle John. Uncle John with his coat, his slip-ons, his fags, his beer-breath, his dart-throwing arm... and this time with a gun and a fast car too. 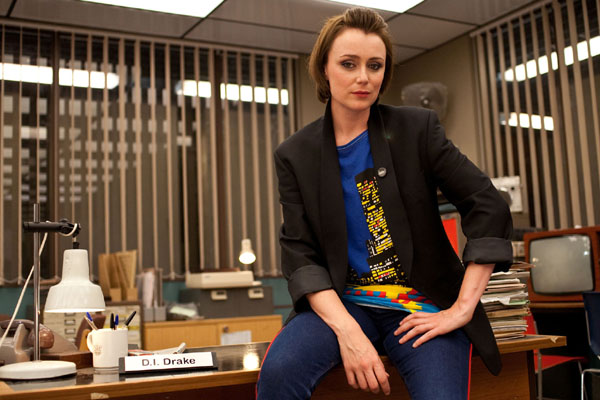 And so there was Life On Mars. Tone, Ash, Matty - three soap opera oiks who met on EastEnders and decided to write a show about coma-cops falling into episodes of The Sweeney. And Uncle John had become Gene Hunt. And Gene Hunt had become ruddy iconic. Like the Colossus Of Rhodes with a beer-gut bestriding the land.

So now we reach the middle of the story. Mars ends. But there are still questions. Is Sam dead? What is this world? Who is Gene? Will Ray ever shave off that 'tache?

Ashes To Ashes was our response to a question from the BBC: Is there any more Gene Hunt? But honestly, we were thinking about Gene and the 80s whilst we were finishing Mars. Because if the 70s forged him, the 80s were only ever going to betray him. In an age of crass, shallow opportunism, Gene was going to be cast adrift. A dinosaur in a rapidly changing world. And THAT'S drama.

And whereas the 70s were mythical to us because we had been kids then, the 80s were ironically more knowing, more grown up, because we were. Not that we started that way. We had Alex Drake - our gorgeous, confident, intelligent police psychiatrist (I mean psychologist - although it's the same thing). Shot in the head and back in time surrounded by characters created by Sam Tyler. Why?

A new mystery started to unfold, with this feisty, smart-mouth woman going nose-to-nose with the Guv. And as soon as Keeley squared up to Phil, we had to put on our sunglasses before the crackling of sexual energy blinded us. 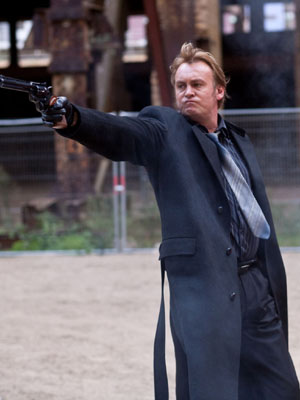 Sitting here in the cold on my camera box, I smile as I recall that lighting test - the first time Phil and Keeley played a scene. Keeley - vulnerable yet defiant. Phil - domineering yet wary. And she reaches out to feel his heartbeat. To see if Gene can be real. And the script calls for him to do the same. And Phil goes for it. They have met as actors only 10 minutes ago yet he reaches out and grabs her right breast with one large hand, uttering the elegiac line "Fandabbydozey."

And then they both fall into each other, giggling like kids. And we're all giggling. But with relief. There's chemistry. And we need chemistry to sustain us through three series.

And so we set sail. Series one - frothy, arch, silly and fun. Yes, fun. Some thought too much fun. But it's the 80s, it's the Quattro, it's New Romantics. Come ON. What, you want Ibsen? Then go see Ibsen, cos we're having fun over here dancing to Adam And The Ants.

Then series two - darker, shadier. Alex now feeling consumed by this world and by her growing fear of, yet attraction to Gene. And Super Mac trailing corruption in his wake. Culminating in Gene threatening publicly to kill Alex himself if she crosses him again. And then shooting her - accidentally - he swears accidentally. And Alex slipping into a coma within her coma and finding herself back home with Gene leering at her from every hospital monitor - on the run for her attempted murder - and shouting at her to WAKE UP!

And so to series three - where the two worlds of Mars and Ashes begin to collide. Where the stakes have never been higher. The dark is rising now. There's still plenty of fun but it's the kind of fun one has in defiance of the cold wind blowing through. And why are we bringing it all to an end? Because a story needs an end. A journey needs a destination. And this show has been a journey for all of us.

In true filming style, we shot the last ever scenes in the story last week. God, our cast were on fire. I mean they were outstanding. And now, tonight, we're ending on a scene from episode seven. Mood is good. Champagne is cracked and waiting for toasts as soon as David shouts "Wrap."

What will I miss most? Writing a show where one can hop from comedy, to action, to pathos, to supernatural, to romance - all in one episode. The freedom, the space to evolve a tale in the way that only television can do.

Because, whatever I write next, I know this is the big story of my career. And I thank you for listening to it. Am I sad? Nope. This story has a start, a middle and an end.

Matthew Graham is co-creator, co-writer and co-executive producer of Ashes To Ashes