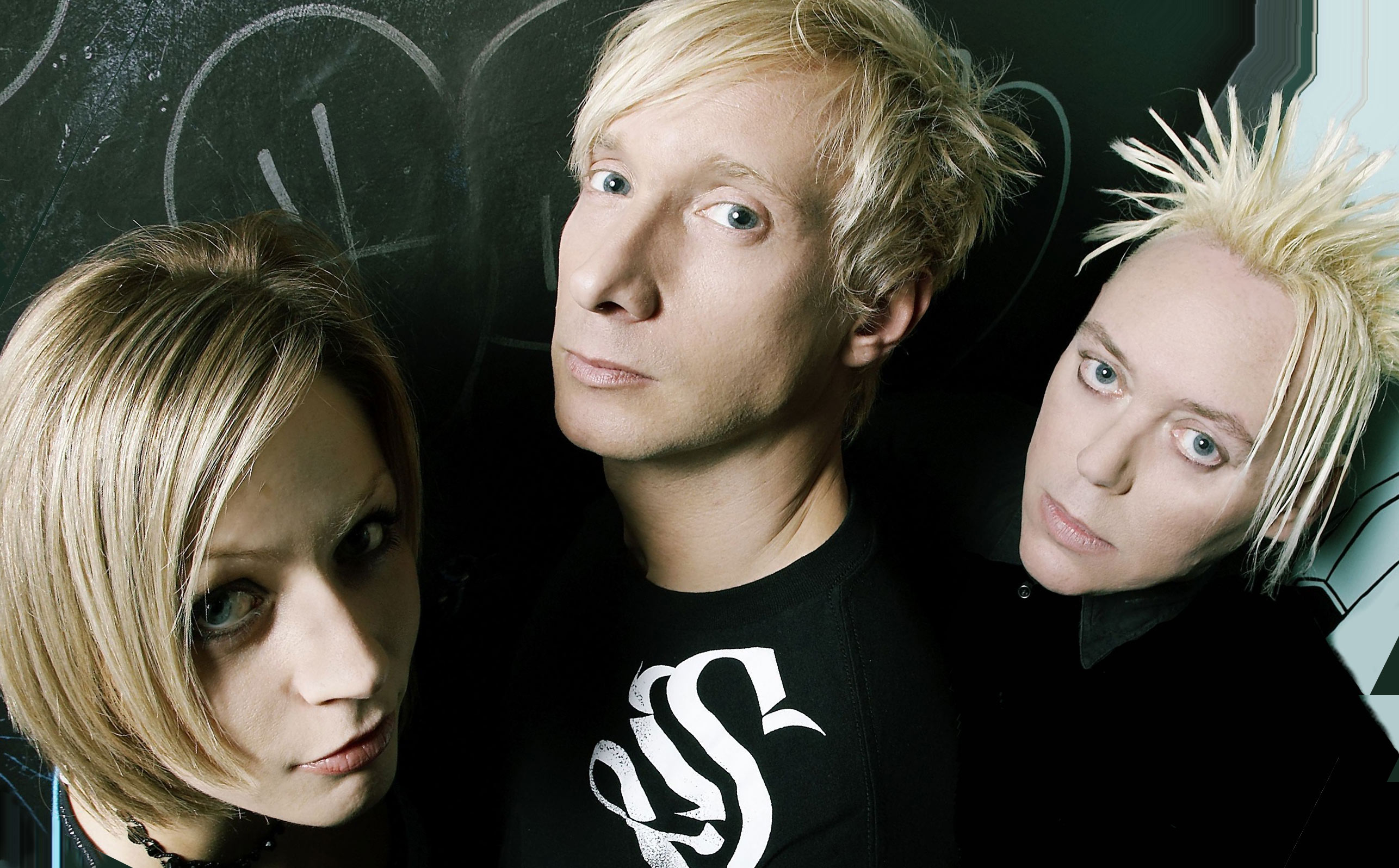 In the small hours of a Monday morning from 2-3am you can hear a selection of my favourite new tunes compiled into an hour-long mixtape of nonstop music. All the audio is sourced from the BBC Introducing Uploader - some of it recommended by friends and colleagues and some discovered via Twitter and my own Fresh On The Net blog.

As each show ends at 3am, it becomes available free from the 6 Music Downloads Page - along with archived episodes from the previous four weeks. At the same time the tracklists and start times for each song are published here together with a link to each artist's website. These are the listings for Monday, 26th November 2012:

CALLING ALL ASTRONAUTS - What's So Good (Echoboy Bounce remix) [starts 00:13]
https://www.callingallastronauts.com/
Calling All Astronauts (above) are politically-charged Alt/Rock 3-piece that take their DIY ethics so seriously they even built their own studio. They have opened for Roger Daltrey and Echo & The Bunnymen among others, and also headlined Alan Magee's Death2Disco at Notting Hill Arts Club. Their debut single Someone Like You was played across the globe, while their follow-up Winter Of Discontent also received a considerable amount of airtime. What's So Good? is scheduled for release on December 2nd. Their debut album Post Modern Conspiracy in out in February with two further singles following in March and May. They have already been confirmed for 2 major festivals in 2013, but in the meantime are having an album launch party at Mother Live in London on December 7th.

THOM MORECROFT - Moon Moon Shake It  [starts 03:35]
https://thommorecroft.com/
Thom Morecroft is not just a short, excitable, and scruffy young man from Shropshire. He is also a fine addition to a growing cannon of Liverpool-based songwriters whose extensive body of original work has earned him a solid local reputation. In 2012, Thom featured on the hour-long Folkscene with Stan Ambrose on BBC Radio Merseyside, and was also included on this show. Now 22, he regularly plays live and has recently joined forces with singer Elle Schillereff, percussionist Chris Cousineau and guitarist James Baxter. Thom will release his new album on December 1st and will be performing at the View Two Gallery in Liverpool on the same day to celebrate!

BYE POLAR BEARS - High Tide  [starts 06:21]
https://www.facebook.com/byepolarbearsband
https://www.byepolarbears.com
From Trowbridge, Bye Polar Bears consider themselves to be an electronic indie experiment. It’s difficult to find out much more about them, I’m afraid, since their website isn’t fully functional yet. Looks promising, though …

APPLES AND EVE - The Colours And The War [starts 09:32]
https://www.facebook.com/applesandeve
Apples & Eve originally formed in 2010 as a duo with Eve Rose (Lead vocals, Guitar and Accordion) & Francine Perry (Drums). They both studied at the same college and discovered each other’s passion for creating and performing the same kind of music. It wasn’t long before Apples & Eve started to create a buzz in their hometown of Brighton and were then joined by bassist Graeme Ross (Laura Marling, Peggy Sue, James Morrison) and fiddle player Jonas Aaron (Not Now Bernard). They’ll be performing at the Old Market in Brighton on November 30th.

SILENT CITIES - Haptophic [starts 13:01]
https://www.facebook.com/SilentCitiesUK
Silent Cities is the project of singer, songwriter, and finger-style guitarist, S. Maddison. Born in County Durham and now based in the North West of England, his most recent collaborations have been with the infamous experimental producer, Mario Leal. He joins Thom Morecroft (see above) at his album launch on December 1st, which is shaping up to be a riotous night.

SPACESHIPS ARE COOL - Blue Birds [starts 16:27]
https://production.bbc.co.uk/introducing/artists/130040
https://www.spaceshipsarecool.com/home.php
Nottingham’s legendary Spaceships Are Cool are that city's self-styled @finest exponents of sci-fi sunshine pop and retro folktronica@. They use an eclectic range of instruments to create their sound, from the Theremin through stylophone to omnichord. This single is available digitally, while you can listen to and download more songs from their website.

MARY CIGARETTES - Middle Class White Trash Ways [starts 20:55]
https://www.soundcloud.com/marycigarettes
Another slice of the pure vocal tones and unflinchingly truthful lyrics of one of my longstanding favourite singers, one Mary Cigarettes. 30 years ago, Gregory Gray was the young frontman for Irish band The Perfect Crime. In his present day renaissance as Ms Cigarettes, he tells us his only calling card "is a lifelong passion for writing and recording." You'll find many more of his beautiful songs - all available as free downloads - and links to various videos on his Soundcloud page.

DRUNK MULE - Spread Yer Monsters [starts 24:30]
https://drunkmule.bandcamp.com/releases
Drunk Mule - known to their friends and families as Rich Morris and Steve Simpson - describe themselves as 2 lads "makin tunes fae Scotland" yet they're so much more than that. The pair of them make enough noise between them for several entire indie bands, are regular wisecracking visitors to my Fresh On The Net blog and are, I'm delighted to tell you, about to release their first album Crash Test Y'self. It opens with this classic stonker Spread Your Monsters (don't ask) and is selfreleased via their Bandcamp page - striking another decisive blow for 100% independent music.

JOEL PETER - Wrap My Ankles [starts 28:30]
https://soundcloud.com/joelpetermusic
I fell in love with this tune the first time I heard it on Soundcloud, and have grown to love it more in the intervening weeks. Joel Peter describes himself as a Brighton based singer-songwriter "who combines left-field lyrical influences with radio friendly melodies". Well, in this particular case, he got that right. At age 24, he’s been described by Xenomania founder Brian Higgins, as a 'Genius of his craft'. Londoners can investigate the unknown pleasures of the "Joel Peter Christmas Show" at the Underbelly in Hoxton on December 22nd.

THE BIRDMAN RALLIES - Telescope Katie [starts 32:50]
https://www.thebirdmanrallies.com
This is the new single by The Birdman Rallies, taken from the album Moons, which is available to download for free from their website. Formed in the leafy suburbs of Harrogate, they have supported The Joy Formidable, Gruff Rhys, Stornoway and Dry The River, and received plays on BBC Radio 1, 2 and, of course, 6music. Their next gig is at 1:22 in Huddersfield on December 12th.

PLASTIC FLOWERS - In You I'm Lost [starts 36:10]
https://plasticflowers.eu/
A solo project originally, now a duo, Plastic Flowers consist of George and Anjel. They are based in Thessaloniki, Greece, where they use distorted guitars, cheap drum machines and old synthesizers to create their own brand of ethereal lofi pop music. You can see them perform this track on their website, where you can also download it for free.

CORMAC O CAOIMH - A New Season For Love [starts 38:11]
https://www.cormaco.net/
Cormac O Caoimh is a singer-songwriter and classical guitarist from Cork, Ireland. He is also a former member of ‘The Citadels’, who received critical acclaim on various releases over the last 10 years. His debut solo album, Stark a Spark, was released in 2007 and received glowing reviews. For his new album "A New Season For Love he re-united with ex-bandmates Art O Laoire and Eoghan Regan, who also were in The Citadels. Cormac has picked up some well-known admirers along the way (including Ron Sexsmith) and has supported Damien Rice, Declan O Rourke, Josh Rouse, Mark Geary, Nick Kelly, Miles Hunt and Damien Dempsey to name but a few. This single was released in April.

MAR KEL THE BADBELLY - LANGuage_HIStory [starts 41:29]
https://soundcloud.com/badbelly
Southampton-based Mar Kel hails originally from Cwmbran and describes himself as "a man who's been on this earth long enough to see and experience a thing or two and is only now putting it in music he likes to call Modern Blues and Beats - there isn't much to write about until you've lived a life" A few months ago he released a first LP called "Set Meal for 1" via his Soundcloud. This song is the story of Mark's life: "my attempt of putting every thought i've ever had in one song" and how that former life ended the day he met his future wife. It's an extraordinary bravura performance - and the other material I've heard of his is equally intriguing. A man to keep centre screen on our radar for 2013.

WHALES IN CUBICLES - Across America [starts 45:19]
https://www.whalesincubicles.com/
After releasing the singles, 'We Never Win' in January and 'Nowhere Flag' in August, our old friends Whales In Cubicles have been recording their debut album, due out for release in 2013. 'Across America' is available as a free download - not only via the Introducing Mixtape this week - but also via the band's own Facebook page. Fronted by Stef Bernadi on vocals and guitar, the rest of the group consists of Leo Weston (drums), Jamie Powell (bass) and Alex Pyper (guitar, keys).

CONRAD VINGOE - Fuel for Fire [starts 50:26]
https://conradvingoe.co.uk
Conrad Vingoe is an Americana-influenced songwriter based in Brighton. he describes his third album Simple Secrets as "a more personal affair" than his earlier releases, having recorded, produced and mixed it himself. He performs live with a trio which presents a different take on his recorded material. Having performed on the same stage as Seth Lakeman and Jethro Tull at this years Beautiful Days festival, the trio can be heard on their 2012 digital EP One Mic (Live).

FORMES - Absence Of The Noise [starts 54:15]
https://soundcloud.com/formes
Formes - you may remember from last time we featured them - are a 4 piece guitar band from Leeds and Dewsbury formed in February this year by Andy Cooper, Jordan McNamara, Dan Schofield and Steve McNamara. The latter, we're told "inject large amounts of tasteless reverb and effects through their guitars to create intense atmospheres and frantic improvised jams". They are supported and warmly endorsed both by Alan Raw on BBC Introducing in West Yorkshire and our old friend Bethan Elfyn on Amazing Radio. They recorded their debut EP earlier this year at Loom Studios, Birstall with producer Grant Henderson.