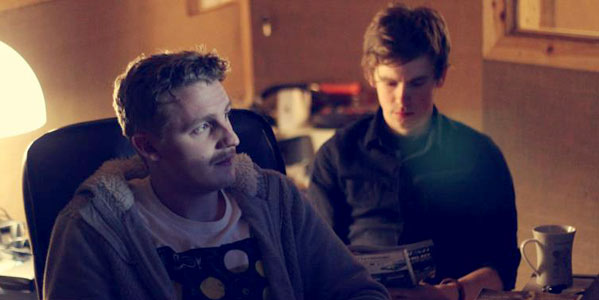 In the small hours of a Monday morning from 2-3am you can hear a selection of my favourite new tunes compiled into an hour-long mixtape of nonstop music. All the audio is sourced from the BBC Introducing Uploader - some of it recommended by BBC colleagues across the Introducing network, and some discovered via Twitter and my own Fresh On The Net blog.

From 3am each Monday the latest mixtape is then available free via the 6 Music Downloads Page - where you'll also find archived episodes from the previous 4 weeks. All the tracklists and start times for each track are published here - together with a link to each artist's website.  Below are the listings for Monday, July 9th, together with a few things each of the artists would like you to know about themselves.

HIGH HOPES SOCIETY - Fathers Day (Starts: 0:04)
https://www.highhopessociety.com
High Hopes Society is a creative collective from around England & Germany. Their aim is to combine works from various musical and visual arts into something in which creative minds can get involved. Their sound is (unsurpringly) a combination of its members' musical backgrounds. Last November they released HHS - their debut two-track EP - which was mixed by Adam Scrimshire and mastered by James Tremayne. They largely work at Blue Barn Studios in Little Downham, Cambridgeshire and this track is their first official single release.

LAURENCE MADE ME CRY - The Rain Song (Starts: 4:32)
https://www.laurencemademecry.com
"I've always been pushed to either be an artist or a musician, it's like you can be one or the other but you can't be both. Laurence Made Me Cry is a way for me to combine everything I love doing as one project and not feel guilty about it" says Jo Whitby, aka Laurence Made Me Cry. "There's such a positive attitude to music in Cardiff. You don't feel judged and people are willing to get involved and help you out. I like that".

ROSSI NOISE - The World (Starts: 7:03)
https://www.facebook.com/rossinoise
"We are a 5 piece band, heavy in beats with dub influences, fusing Dupstep, Dance, Drum and Bass, Hip Hop and Rock into cinematic proportions. In just 6 months, Rossi Noise have received increased local attention, tipped as one of next years big acts by music development agency Generator and have just aired on various UK radio stations, including BBC Radio 6Music  and BBC Introducing In Newcastle."

SILENT DEVICES - A Safer Place To Land (Starts: 10:21)
https://facebook.com/silentdevices
We're an Ambient/Pop band based in Leicester. Released debut single 'Una/Moire' through CRC Music Group in March 2012. Have received airplay from Bethan Elfyn, Dean Jackson and Tom Robinson as well as a variety of Amazing Radio DJ's. "Beautiful! Absolutely love their sound" says Bethan Elfyn.  DrownedinSound declared "Their songs sent shivering tingles up our collective spines" They've  supported the likes of: Cults, God Is An Astronaut, 65daysofstatic, The Rumble Strips, This Will Destroy You, And So I Watch You From Afar, Beth Jeans Houghton, Various Cruelties etc...

PYLO - Enemies (Starts: 15:06)
https://www.pylomusic.com
Describing themselves as "a brand new band from Bath" Matthew Aldus, James Scott,  Richard Gully and Max Blunos tell us "Pylo is a new start. It leaves the old and embraces the future, learns and betters itself. It's strong and delicate, powerful and gentle. We are looking for a 5th member, please get in touch if you think this could be for you..." Under a different name and with a different sound they've been much loved by BBC Introducing both in Bristol and nationally, but they'd prefer not to talk about that.

YNGVE & THE INNOCENT - You'll Be Mine (Starts: 19:48)
https://www.spacetobeyourself.com
Brothers Yngve and Demian Wieland form the backbone of this band which (through various line-up changes) has moved from Sligo on the west coast of Ireland to London where they've been based for the past 4 years. Averaging over 100 shows a year they have had airplay from Lammo on Radio 2 and their debut album The Sadness of Remembering has just been released. After a round of Summer Festivals in the UK and Eire,  in November they'll be returning for their second tour of Germany this year.

3 POTATO 4 - Special (Starts: 23:34)
https://www.facebook.com/3potato4music
An interchangeable collective of likeminded individuals, currently consisting of Johnno Casson & Mike Deans on sabbaticals from their other musical projects.  Johnno (aka Snippet) puts the sounds together while Mike (formerly of The 633) adds his vocal skills to the proceedings. "We are special, we are 3 Potato 4. We like being noisy, forcing our opinions upon you and punching above our weight. We have recorded one song. We have yet to gig so this is a fresh start up. We are that new we don't even have a website yet party people but we have this Facebook page - hooray!"

THIN WHITE DUDE - Top of the Tree (Starts: 25:48)
https://soundcloud.com/thin-white-dude
"Since childhood I've had a love of music" says Jason J Davis. "At school I played the trumpet (badly) and piano (even worse). I first started creating my own music about 10 years ago when I got a demo of the Sony ACID software with a new PC sound-card I bought. Since then I have continued to make and re-mix music, though with some long breaks in between." My albums  Discombobulation and Past, Present And Future are available on iTunes and the rest of the interweb as independent releases. Oh, and some singles too.

AL LEWIS - Lines Upon the Sand (Starts: 29:03)
https://www.allewismusic.com
Al Lewis is a singer-songwriter from North Wales based in London. 'Our Lines Remain' is the follow up EP to the inaugural Welsh Music Prize nominated album 'In the Wake'. It also follows on from the 'Live on the Wire' EP which showcased Al's live performances from Abbey Rd Studios as part of Abbey Road Debuts. A familiar face also on the Welsh Language music scene, Al has so far released two Welsh Language albums, spending several weeks at number one in the Welsh Language album charts. He's also received 'Best Male Artist' two years in a row at the BBC Radio Cymru Awards.

MOUNT FABRIC - Curves & Corners (Starts: 32:14)
https://www.mountfabric.com
Mount Fabric are nothing to do with fabric, or how to mount it. We are unabashed dreamers, purveyors of the melodic, falsetto, reverb, toms, distortion, effects, shattering highs and abusers of all things classic. In 2011 we released two EPs on Hairy Wolf Records (‘Secretly an Astronaut’ and ‘Threads’), made appearances at Friends Of Mine and Kendal Calling festivals. 2012 started with our first US shows, kicking off with The Roxy on Sunset Strip in Hollywood and ending at the House Of Blues in San Diego. Exhilarated, exhausted and almost broken, the band have retreated back into their Manchester studio to start work on their next EP, and prepare for the release of their most ambitious single yet - Curves and Corners.

ZENA KITT - Love & Regret (Starts: 38:16)
https://www.zenazena.com
"No fame-seeking stage school graduate nor some shrinking bedroom poet, Zena Kitt offers something richer, deeper and more exotic. Burning with charisma and dripping in personality, wickedly humorous and dark with passion this is a woman that beguiles and intrigues, cajoles and inspires; a vixen, a siren who has broken hearts and had her own heart broken. Unafraid of honesty and able to conjure melodies as easily as most of us breathe, she sings songs that are resonant with experience and her sensuous, breathy vocals speak of love, longing and desire over piano-led laments and beat-driven vignettes." We've included this track in the show because it sounds great. What I can tell you about the artist after reading her biog? Absolutely nothing.

BANDOLIERS - Insta Vice (Starts: 42:17)
https://www.facebook.com/bandoliersmusic
"We are a group of 19 year olds from the seaside town of Whitley Bay" say Tommi Evans, Jonny Sabiston and Harry Jenkinson. It's the lead track on their digital EP Just Because I Don't Care which can be bought online from - new one on me, this - Tesco. For just £2.59 with two clubcard points. The BBC would like me to remind you that other - equally good - online grocery stores, voucher rewards schemes and digital music retailers are of course available.

MELISSA JAMES - Don’t You Keep Yourself Down (Starts: 49:41)
https://melissa-james.com
Day Dawns, the debut album by songwriter Melissa James, has been nearly three years in the making. During which time she was steadily building up a collection of "soul-searching songs which powerfully reflect her inner thoughts and experiences". The singer, who is from Mill Hill in North West London, brings together her influences - from Nina Simone and Terry Callier to Rickie Lee Jones, Amos Lee and blues man Eric Bibb - on this recording which is a collection of mostly original songs she's co written with Ross Lorraine. Day Dawns has just been released.