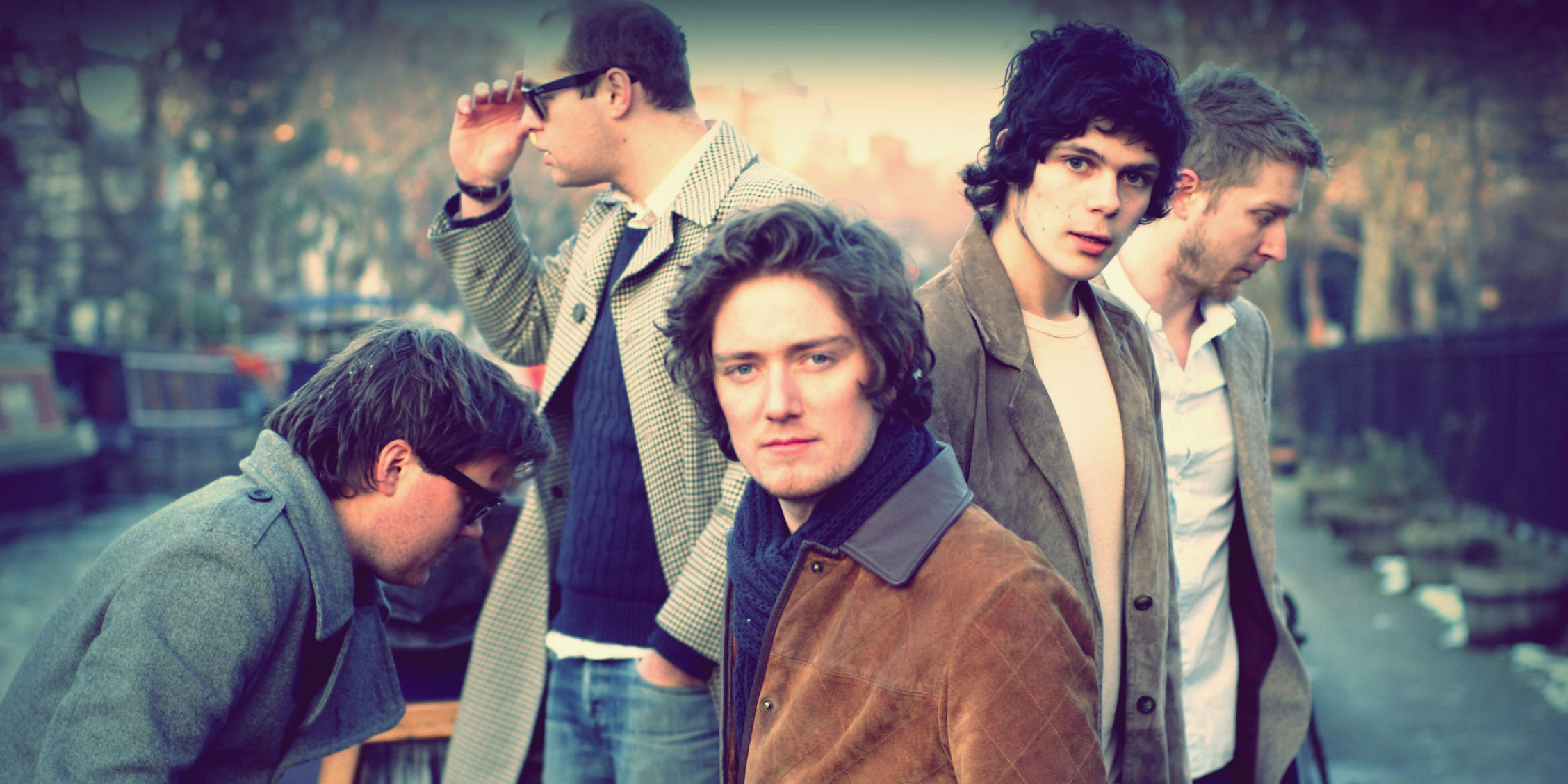 Every Monday from 2am we bring you a 60 minute mixtape of new tunes uploaded to the BBC Introducing Uploader - handpicked by myself - which you can then download for free at 3am via the 6 Music Downloads Page.

We aim to pack in maximum musical enjoyment with minimum interruption, so instead of announcing individual song titles, we publish the tracklisting here at the start of each show - with brief information about each artist and a direct link to their website.

Here are the listings for our second episode, broadcast at 2am Monday, April 16th 2012 on BBC Radio 6 Music and downloadable an hour later here.

CHANNEL CAIRO - A Year
https://facebook.com/channelcairo
London five-piece CHANNEL CAIRO (pictured above) sport a poetic list of influences on their Facebook: "the golden age of travel, touring as a child, animals like teddy bears, propulsive engines, the coming of age, a dog called Huntely, an airline ran by animals." This fine forthcoming single will be launched at the Camden Barfly on June 26th and you can see the newly-shot video on their website. It was an overwhelming favourite at my Fresh On The Net blog recently.

MELISSA JAMES - I Need You
https://melissa-james.com
MELISSA is a superb soul singer in classic mould, but also one of the many artists who find writing about themselves as enjoyable as having teeth pulled. She manages to squeeze out 16 words on her Soundcloud: "Singer-songwriter working on my debut album, Day Dawns, which is due for release this summer." She's based in London and plays the Richmond Music Festival in nearby Surrey on 26th April.

SOLKO - December
https://solko.bandcamp.com
East Anglian 6 piece SOLKO - who describe themselves as "all about vibes and energy" - firrst formed in 2009. Last September they released their debut EP 'Fix This Fire' and they attended the BBC Introducing Musicians Masterclass in January. Norfolk listener SAM SHEEPSWEEP told us last year that their "live energy and showmanship on stage is incredible... they're the best band on the Norwich Scene at the moment."

LUCA LUCIANO - Jazz Impromptu
https://lucaluciano.com
Born in Naples, a graduate from from the Conservatoire of Salerno, an academic at Leeds University for many years and now based in London, composer LUCA LUCIANO is one of Europe's leading exponents of jazz clarinet and a passionate evangelist for the instrument. This piece comes from his recently released album “Partenope” which includes a free digital score when bought from his website.

BETHANY WEIMERS - Silver Moon
https://soundcloud.com/bethany-weimers
London born, Oxford raised alt-folk artist BETHANY finally releases her long anticipated debut album 'Harpsichord Row' on May 7th 2012 on 1784 Records. She recorded it at home in splendid isolation in the course of last year armed with a single microphone, ProTools, and a vocal booth fashioned from sleeping bags and an upturned couch. We already played her song "Desire" from said album last October.

ROB MARR - Fat And Happy
https://robmarr.net
From Londoner ROB MARR’s second album ANATOMY which was recorded with Sly and the Family Stone drummer ANDY NEWMARK and produced by keyboardist and fellow songwriter ROBBIE MOORE. Influences include classical piano, hip hop, blues and soul, hymns, Britpop and the writers Raymond Carver and Annie Proulx. This is the second song of Rob's to have been acclaimed as a Fresh Fave by readers of my music blog.

THE SUN ELECTRIC BAND - In The Clouds
https://thesunelectricband.bandcamp.com
From the newly released debut EP "Want to Feel Like" launched by THE SUN ELECTRIC BAND this Saturday along with their own TAKE CARE label to coincide with the 100th anniversary of the Titanic sinking... They have a big gig on Wednesday 18th April supporting HERMAN DUNE at The Ruby Lounge in their native Manchester. Hear more jangly psychedelic guitar-fuelled delights on their Bandcamp page.

THE MISERABLE RICH - True Love
https://soundcloud.com/themiserablerich
A song recorded by THE MISERABLE RICH at Blickling Hall, Britain's most haunted stately home. Their album MISS YOU IN THE DAYS is full of ghost stories, death and sex. "Though" adds frontman James "it's actually fairly perky all the same." This song relates to a ghost his dad once encountered at a chateau in wartime France - and whose story he heard about the following morning. It was a good story - but it's an even better song.

REBEKAH DELGADO - Little Boy Blue
https://rebekah-delgado.com
REBEKAH is a solo musician from London, who embarked on a solo career in 2010 when her previous band THE LAST ARMY broke up. Live, she's often accompanied by musical saw, violin, harmonium, cello and drums. Her album DON'T SLEEP is due for release April/May 2012. We accidentally listed this last week, but it really is in this week's Mixtape - sorry, Rebekah!!

LITTLE X’S FOR EYES - Kind Hearts (SOUNDS OF SYSTEM BREAKDOWN Remix)
https://soundcloud.com/little-xs-for-eyes
https://soundsofsystembreakdown.bandcamp.com
We don’t often champion remixes on BBC Introducing - preferring to promote original artists. But since both the original artist and the remixers in question were happy for us to include this track in our mixtape, we couldn't resist its gorgeous atmospheric groove. Check out the web links for both LITTLE X’S FOR EYES and SOUNDS OF SYSTEM BREAKDOWN, they’re both great.

THANK PABLO - By The Sea
https://thankpablo.co.uk
South London 4 piece THANK PABLO consist of Ryan, Tom, Ted, Rich - who make, they tell us "sun-kissed quintessentially English pop songs that have been dragged through the backstreets of Africa, Spain, France and Jamaica" Their aim is to make the public forget both the pressures of a devastating global economic crisis and the increased cost of alcohol, with music that makes people smile. Job done!

RUSSI HARLEY - The Beach
https://soundcloud.com/russiharley
RUSSI HARLEY is frontman with the Bath-based live electronic act ELECTRIC CONTRADICTION. He also writes and produces tunes under his own name using analog synthesisers, and loves working with other musicians. He'd particularly like to hear from any singers interested in collaborations, via his Soundcloud page.

THE SAVAGE NOMADS - Tension in the Middle
https://thesavagenomads.tumblr.com
Tension in the Middle is already a big favourite with Gideon Coe here on 6 Music. It's the title track of a new EP by South London 5 piece THE SAVAGE NOMADS which comes on May 27th. They have a monthly hometown residency at Notting Hill Arts Club's Death 2 Disco night - where their next show on May 2nd also features the mighty BEAR CAVALRY. Highly recommended.

JOSHUA CAOLE - Pleased To Have You
https://facebook.com/joshuacaoleuk
Welsh songwriter JOSHUA CAOLE is currently on tour opening for Christiaan Webb (Jimmy Webb's son). Pleased To Have You comes from Joshua's album Moon Palace which is released later today, Monday April 16th. He plays The Slaughtered Lamb in London on April 24th when he'll have half of The Magic Numbers - who played on his album - joining him on stage.

MARSICANS - Hands
https://facebook.com/marsicansuk
James, Matthew, Joe and Oliver are all aged 17/18, live near Leeds and recently changed their sound and band name to MARSICANS. They'll be appearing early next month at Live At Leeds and their next single 'Scuba' will be getting its premier airplay on BBC Radio Leeds on May 3rd. "Bowt it really" they say "just try and enjoy…"

CITIZENS - Reptile
https://citizens.cz
Another London five piece who avoid putting any factual or biographical information on their various web pages except that their names are Tom, Mike, Lawrence, Martyn and Thom. They do however divulge that Reptile is released as a single today (Monday April 16th) on Kitsuné, and that they play Ridley Road Market in London on Weds April 18th as a warm-up for upcoming tour dates in Italy and France.