Even though we should really be rather accustomed to seeing Bradley Wiggins in yellow by now, there was still something wonderfully unreal about watching him cruise up the Champs-Elysees on Sunday, bike, helmet and jersey all the same bright jaune, to become Britain's first ever winner of the Tour de France.

These sort of Parisian valedictions are not supposed to feature the British in any other than a supporting role. That a scrawny ginger kid from Kilburn has grown up to win his sport's greatest prize is one of the more remarkable tales British sport has produced.

It might even be the most laudable of all. "I may be a bit biased," admitted Sir Chris Hoy earlier this week, "because Bradley is an old team-mate and a great guy. But if he gets to that finish line it will be as good as anything any British athlete has ever done."

These are mighty claims, and lead to the sort of arguments that slander legends and end friendships. Yet the context, manner and meaning of Wiggins's golden July give Hoy's words a resonance that is hard to ignore. 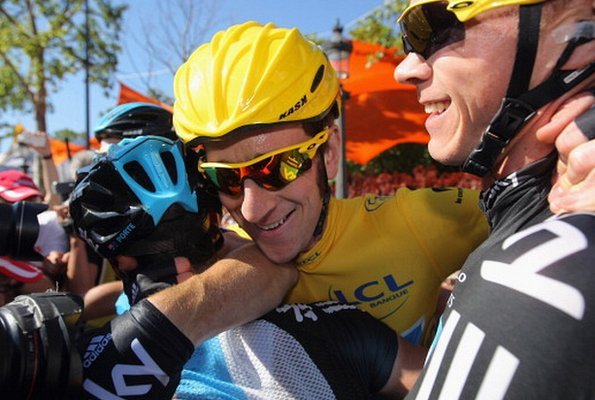 Wiggins has worn the leader's yellow jersey for 60 per cent of this year's Tour. Photo: Getty

There are the numbers - 109 years and 99 races gone, and just two fourth places for Britain to celebrate before this weekend; the stats (no Olympic track gold medallist has ever gone on to win Le Tour); and the plain old impossibles: a bloke who resides in Eccleston reigning in Paris; a champion of the track at ease in the mountains, a chaotic war of a race made to look like a procession.

Back in July 2007, when British Cycling's performance director Dave Brailsford first mentioned his dream of a British Tour team, it seemed exactly that: a happy fantasy, a vision at odds with history.

British teams had rarely been more than footnotes to the Grande Boucle, from the day in 1937 when Charlie Holland's broken pump ended his country's debut attempt, to the failure of eight of the ten-strong Hercules team, the UK's first, to complete the loop in 1955, to the dismal collapse of the ANC Halfords team in 1987.

As the Beijing Olympics a year later illustrated, Brailsford could make a mockery of precedent. But when he launched Team Sky on 4 January 2010 with the promise of a British Tour winner in five years, not even he expected a British one-two within three.

Some sporting triumphs owe a large debt to luck - a one-off punch, a penalty shoot-out, a one-eyed official. Wiggins's victory has its roots in nothing more complicated than ceaseless hard work, pinpoint planning and an unwavering commitment to become as good as he could possibly be.

After finishing Sky's debut Tour down in 23rd place, he sat down with coach Shane Sutton and sport scientist Tim Kerrison and worked out how to transform himself into a true Tour contender. In Tenerife's Mount Teide national park, 7,000ft above sea level, the hard yards were climbed, far from family, far from home.

The route of the 2012 Tour certainly suited Wiggins - 100km of time-trialling was always going to play to his strengths. The increasing success of cycling's battles against doping also left him facing a field as fair as any in an age.

But these are not caveats.

Wiggins has been the dominant stage racer of the entire year. During his hat-trick of victories at Paris-Nice, Tour of Romandie and Critérium du Dauphiné he wore the leader's jersey for 15 of the 21 racing days. In France he rode in yellow for 2,064km of the 3,497km route. And if his time-trialling has been pivotal, wasn't it also for former winners Lance Armstrong and Miguel Indurain?

If Wiggins owes much to a very un-British level of planning and resource, he also owes a lot to Sky's overseas operators - Christian Knees of Germany, Bernhard Eisel of Austria, Richie Porte and Michael Rogers of Australia and Norway's Edvald Boasson Hagen - as well as the unstinting support of his compatriots Chris Froome and Mark Cavendish.

In that he is in shared company with every other Tour winner. What makes his win all the more admirable is the style he has done it in - untroubled on the roads almost throughout, and able to deal with the unique pressures and questions which come the way of a maillot jaune.

Race leaders aren't expected to lead out their sprinters in the final week, let alone do it three times. Neither would all his predecessors have ordered the peloton to wait for the reigning champion, as he did for Cadel Evans, when saboteurs threw tacks on the road to derail the onrushing express train.

For these deeds the French media have dubbed him 'Le Gentleman'; L'Equipe has even hailed "the most famous rouflaquettes (sideburns) since Elvis Presley".

Back in Britain, the impact has been even greater.

Wiggins has not just dominated the back pages of newspapers but, increasingly, the front. This Tour win has secured him alongside Steve Redgrave, Daley Thompson, Chris Hoy, Ian Botham and Bobby Moore in the public sporting consciousness.

His successes should be hard to understand; none of us will ever ride the Tour. But millions of us cycle, when we don't row, or pole vault and throw discus, or run 1500m. We could never dream of cycling as he does, but that's exactly the point: we're aware of the gap, and we're in awe at how vast it is.

It is also an achievement rooted in uniquely British circumstances.

Although born in Ghent to an Australian father, Wiggins is a product of a homegrown cycling culture that long pre-dates Lance-inspired sportives and City-boy bikers: studying Cycling Weekly as a schoolboy, learning his trade at the dilapidated Herne Hill velodrome, making his time-trial debut on the Hayes bypass.

Is this the greatest British sporting achievement ever? The comparisons are near impossible, not least because the Tour and its demands are unlike any other sporting event. That's why we love it.

If you want to try, then you could throw in Roger Bannister's four-minute mile, Redgrave's five consecutive golds, maybe even the most sacred of all, to part of the nation at least: Wembley, 1966.

If that sounds too much, listen to 81-year-old Brian Robinson, Britain's first ever winner of a Tour stage, as he set off for Paris to witness Wiggins's coronation.

"We never dreamed of this in my days," he said. "We were scrubbing along at the back of the bunch."

British riders scrub along no more. The man known to the French as Le Gentleman, and the Dutch as 'The Banana With The Sideburns' has climbed the pinnacle.