History was always going to be made in the red dust of Roland Garros this week, but that inevitability didn't make the moment any less dramatic or draining when it finally arrived.

In fighting through the exhaustion, emotion and cold drizzle to win the French Open 6-4 6-3 2-6 7-5, Rafa Nadal ensured that this time it was he, not his electric adversary Novak Djokovic, who required the record books to be erased and re-written.

Seven French Open titles, by the still remarkably tender age of 26, puts Nadal alone in the Parisian pantheon, clear of a record of Bjorn Borg's that once looked impossible to surpass. Djokovic, stoic in damp defeat, must wait another year at least to join those elite players who have held all four Grand Slam titles at the same time.

If it rained on Rafa's parade in Paris, it was an equally unexpected coronation for those watching rapt court-side or glued to the battle via their televisions in the UK.

A French Open final hasn't been delayed until the Monday since Ilie Nastase's stroll to the title in 1973, which may explain the empty seats around Court Philippe Chatrier at the resumption and why ITV were showing Loose Women on their main channel, Tight Between The Men pushed way out to ITV4.

Neither was the match quite - quite - the eyeballs-out, all-time classic most had hoped for. Those frequent rain delays made it feel like watching a great film interrupted by breaks for TV adverts and the 10 O'clock news, the narrative disrupted and the tension dissipated just as the plot was threatening to sweep us away as it had during the Australian Open final five months ago. 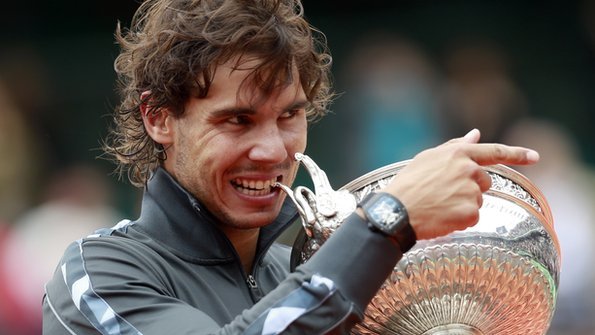 Maybe we have been spoiled by that near six-hour Melbourne marvel. The peaks, as we have come to expect of these two remarkable men, were as lofty as ever. But that the match was lost on a double fault was perhaps fitting when the unforced error count was the key statistic that separated the two.

Djokovic almost matched Nadal in clean winners (34 to 39), first serve percentage (59% to 62%) and total points won (116 to 125). He was more ruthless on break points. But in shipping 53 errors to the Spaniard's 29 he created the openings that a competitor like Nadal does not give up.

Free points, when facing a player with Rafa's armoury, equate to suicide. His forehand alone is enough to trigger surrender.

On days like Monday, when it cut and chopped Djokovic to pieces, the gasps of astonishment in the crowd were mixed with shrugs of Serbian sympathy.

It is a frightening weapon, a horror to scare children to sleep and give grown men nightmares. At the same time it is a thing of beauty, admired and cherished by everyone except the poor unfortunate facing it down across the net.

That it was the result most wise men expected, despite Djokovic's top seeding, should not detract from the magnitude of Nadal's achievement.

His magnificent seven at Roland Garros means he now has 11 Grand Slam titles overall, just one behind Roy Emerson, three behind Pete Sampras and five away from the record of 16 held by Roger Federer.

How many more French Opens can he win? Time and form remain on his side. Three years ago only tendonitis looked like stopping him, but even that debilitating knee condition looks to be in check, if not beaten.

He dropped just one set en route to this latest triumph, and that on Sunday as the heavy rain tethered his topspin forehands temporarily to the wet clay. Since he first set foot on these famous courts he has amassed 52 wins and only one loss, a half-century that neatly accompanies his 50 career singles titles and $50m in career prize money.

Borg, his predecessor as the king of clay, was a fitting icon of his era - long hair, tiny shorts, a laconic rock star pin-up for playboy times.

Nadal is equally symbolic of our own age: a player at hyperspeed in a non-stop world, physique carved by obsession, a dominance built on power and ruthless application of superior strength.

As he celebrated on Monday by climbing up into the crowd in search of his uncle Toni, his vanquished opponent sat upright in his chair, staring intently at the plasters on his fingers rather than the cavorting up above. 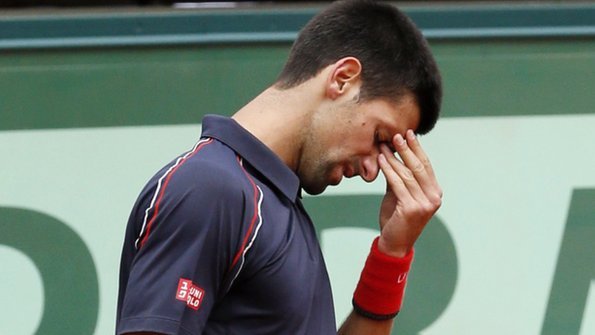 It was the result that most wise men expected despite Djokovic's battling performance. Photo: Getty

Djokovic will see these as crumbs, but in extending Nadal to almost four hours he had given him his toughest French final yet. To win eight games in a row against the best player ever to step foot on clay, at his peak, is a little miracle all of its own.

He will also know, once the immediate disappointment fades, that Paris was just another chapter in a rivalry which should illuminate the men's game for many Grand Slams yet to come.

Five times these two have now met in the big finals. Even after this defeat Djokovic leads the series. With his Wimbledon crown to defend in a fortnight's time he may not have to wait long for his revenge.

For those of us on the outside, watching spellbound as another layer is added to a rivalry that already has so much, there is delight in what has gone before and relish at what may follow.

These are momentous times for Nadal, but they are also remarkable for men's tennis - for its quality, its depth and its triumvirate of complementary heroes at the top of the rankings.

If all three of Nadal, Djokovic and Federer will leave the game among its all-time greats, on Monday it was another storied band whose ranks Nadal symbolically joined.

The trophy that he raised with tears in his eyes, the Coupe des Mousquetaires, pays tribute to the four Frenchmen who lit up world tennis 80 years ago.

Jean Borotra, Jacques Brugnon, Henri Cochet and René Lacoste, 20 Grand Slam singles titles between them, were immortalised in sporting myth as the Four Muskeketeers. In Nadal, they have their D'Artagnan .