Andy Murray, ardent football fan, could be forgiven for having watched the England football team's displays at the European Championships with a certain amount of jealousy.

Not because he wanted them to lose (that was a mis-quote and a long time ago) but for the near-complete absence of expectation around their performances.

For while the English sporting public appear to have accepted that 23 men plus one wise old coach cannot be expected to end a 46-year wait for another trophy, they still seem to believe that one young man should end a far more malevolent hoodoo stretching back a further 30 years.

Very little about Wimbledon fortnight is particularly fair on Murray. On a surface that is not his favourite, after a build-up marred by injury and uncertain form, watched by millions who ignore tennis for the remaining 50 weeks of the year, he must either be crowned champion or forever be thought of as a failure, glorious or plucky or otherwise.

All this - and three of the greatest players in history to get past?

"In January I thought the gap between Andy and Rafa, Roger and Novak was getting smaller," says Richard Krajicek, Wimbledon champion in 1996 and back this year as an expert for BBC Radio 5 live. "Now I'm not so sure.

"This year those top three guys have been playing amazing tennis. Let's take just one of them. In my time there was Michael Chang who ran everything down and, as his opponent, that gave you real problems. Rafa is at another level above that altogether.

"He is so fast that you have to hit the ball even closer into the corner of the court, so close that you can easily go a fraction long or wide. When you make the error, you start doubting yourself - was that the right shot? Am I playing badly? 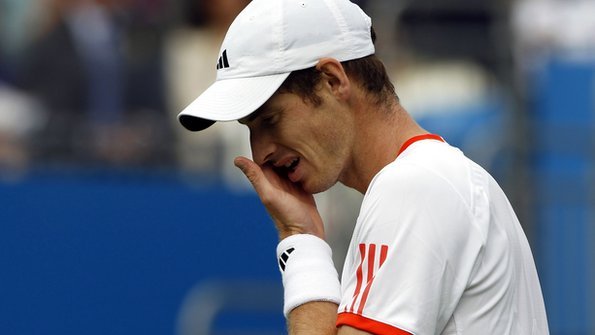 Andy Murray heads to Wimbledon having lost all three of his preparation matches. Photo: Reuters

Nadal has beaten Murray at Wimbledon in all three of their meetings. Murray has lost to Djokovic and Federer, twice, in the three Grand Slam finals he has made. So what does he need to add to his game to break through that cut-glass ceiling?

"Murray is at a very high standard," says Krajicek. "Physically he is at the same level as the big three. He has shown plenty of times that he can produce their level of tennis.

"What he needs is to believe that. That sounds like a strange thing to say, but he needs more confidence in his game. He needs to remind himself that the top three are scared of his game and of his strength.

"A little more belief in his game would take him a long way. I don't think he has to worry so much. Don't worry about hitting winners, don't worry about taking your time in a point. There is a middle ground between passive and going all out for winners, and that's where he wants to be.

"Tactically he could certainly come to the net more. He came in against Federer in their last few meetings but sometimes did it off the wrong approach shot and got passed. He then stopped doing it, whereas what he should have done is keep doing it but off the right ball.

"Sometimes he doesn't seem to realise how big a game he has. I think he can out-hit both Rafa and Novak. Roger maybe has more power, but Murray is close behind.

"I wish I had possessed his game. He maybe isn't as consistent as those three above him, but neither was I and I still won a Grand Slam title. He has to believe in his game and there will be a Wimbledon or US Open title for him."

Some might consider Murray cursed to be at his peak when Federer, Nadal and Djokovic are all close to theirs. Andre Agassi has told the BBC that Murray would have won "multiple" Slams in another era.

Across all four of the Slams, there is now far less room for a Petr Korda, Thomas Johansson or Thomas Muster to sneak through on the inside and snatch one of the big ones. At Wimbledon, there is no sign of an opening to exploit as Goran Ivanisevic did in 2001 and Lleyton Hewitt in 2002.

Might Murray have to accept that he will be bracketed instead with the Tsongas, Berdychs and Soderlings rather than that trio of elites, that he may have to play the same role as Miloslav Micir in the 1980s and Marcelo Rios in the '90s?

"He shouldn't think about being unlucky," advises Krajicek. "It is very, very hard to be ranked number one right now. He can win big tournaments, Grand Slams, world tour finals - that's where his chances are for me. Not being number one.

"The dominance of those big three with ranking points is extraordinary. When I was on the tour, Pete Sampras was the best player by some margin but he wasn't winning as much as they are. It was the same with Stefan Edberg. Rafa Nadal has been world number two for longer than anyone else and we don't think less of him.

What of Murray's age? To win your first Grand Slam at his current age of 25 is historically unlikely. With the exceptions of those rogue champions above, the big winners start early and carry on.

"Andy has to make sure that he doesn't start to believe he might have missed the boat," says Krajicek.

"I feel positive for him. For the last three years I've been telling tennis fans in Holland that he will win a Grand Slam event. He could have won Wimbledon last year, had he been able to maintain the level he was at in the first set of the semi-final against Nadal.

"In his coach Ivan Lendl he has the perfect example. It took Lendl a long time to win a Grand Slam too, yet he kept believing and kept working. Once he got that break - in his case, coming from two sets down to beat John McEnroe at the French Open in 1984 - he went on to win another seven. Andre Agassi too - he lost his first three Slam finals. It takes time but you can make that step."

And what if this fortnight, as with so many before, fails to end Fred Perry's unwanted record? How then should the country treat its vanquished son?

"If he doesn't win Wimbledon he is still a great player. People say Lendl failed at Wimbledon. Ask him and he will point to two finals and five semi-finals on his worst surface.

"If Andy lost in the first round five times in a row you could call him a failure. Instead he has made three semi-finals, playing in the toughest era in tennis history. Britain should appreciate the player it has."