If it started with a snick and smear and sense of panic in the murky Lord's air, it ended a few hours later in entirely contrasting fashion - runs flowing, sun shining, batsmen coasting.

England's five-wicket win on Monday afternoon might have been the result that all wise men predicted. But the way they got there has filled weary West Indian hearts with rather more optimism than most expected, and simultaneously shone a light on how this England team hope to fulfil their stated desire to become the best their country has yet produced.

When Kevin Pietersen was caught behind to reduce England to 57-4 with shine still on the ball and 134 more runs needed, thoughts went back to another Lord's run-chase, 12 years ago, when England needed just 188 to beat the same opponents and teetered on the brink several times before wriggling home by two wickets.

This is a more anodyne West Indian side, and England's more comfortable escape must be seen in that context. The pitch this week has been as true as a surveyor's sextant and as full of fright as an episode of Balamory. 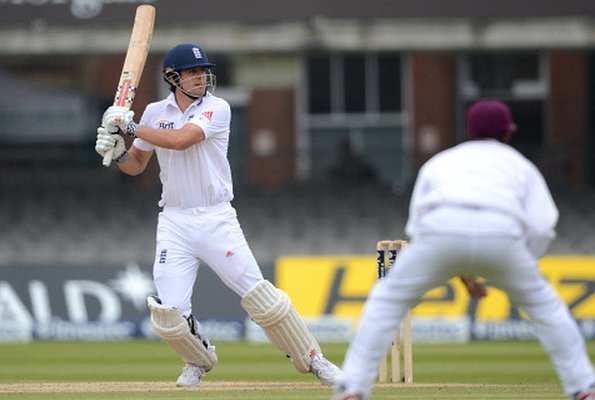 But clattering wickets and final-day deficits bring their own pressures. Where heroics were needed back then from number eight Dominic Cork, here Alastair Cook and Ian Bell first stilled the alarm bells and then took control in such unhurried fashion that fright became formality almost before deja met vu.

"Cook, at the top of the order, shut the barn door," says Sir Viv Richards, who as a batsman was rather more about blowing doors clean off.

"It wasn't a negative approach. All the body language was good. Bell came in and was positive as can be, and neither he nor Cook allowed the pressure of the situation to affect the way they played."

Cook eventually fell with just two runs required. But his unflustered 79, and Bell's complementary 63 not out, had steered England from crisis to total control.

"Cook may not be the prettiest left-hander on this earth," says Richards. "Certainly he's not as stylish as a David Gower. But in terms of getting the job done he is marvellous.

"I've watched Bell for a number of series now, and for me he is England's best technical batsman. There's nobody in the team as technically organised as him, nor as fluent in his strokeplay.

"He has come on leaps and bounds. To have a guy coming in at five with his level of batsmanship, with 16 Test centuries to his name, is huge, and the way he now plays means England's middle order is much harder to dislodge than for many years.

"Experience plays a huge part in tight matches like this, and England's collective know-how was a big factor in their win.

"Cook, from his heroics over the past few years, knows how to make sure his team get across the line. They took the quick singles, rotated the strike and made sure they turned ones into twos."

England captain Andrew Strauss reserved his greatest praise for Stuart Broad, whose 11 wickets in the match did so much to create the opportunity Cook and Bell took with such elan.

In his last nine Test matches, Broad has taken 51 wickets at an average of 17, a run now looking less like a golden patch and more like permanence.

With a batting average over the same period of 33, he fulfils the purist's statistical measure of a true Test all-rounder, yet he comes in at eight. While Cork's merry biffing a decade ago will always be remembered fondly, England now have a strength in depth that generally renders such desperate measures unnecessary.

Strauss claimed afterwards, with some justification, that the new-ball partnership of Broad and Jimmy Anderson is as potent as any in the world.

By contrast, it was the West Indies' lack of a similarly strong partner for the impressive Kemar Roach that aided England's escape from 57-4.

"There's a two-card trick that teams need to play in situations like that," says Richards. "When you look at someone like Roach, who in my opinion is as quick as anyone today, you need support.

"But at the moment he is the only one. You need to be able to enforce sustained pressure, with guys at the other end producing the same aggressive stuff.

"England are too wily and experienced a team to be beaten otherwise. They knew that if they saw off Kemar then the guys at the other end wouldn't be coming at them as hard.

"When you're only defending a total of 191 it's vital that you get your wickets from both ends. That's what creates the pressure."

That the West Indies had a chance at all should give their beleaguered supporters great hope.

They are still nowhere near the finished article. They remain a rough draft, lacking depth and Test experience and denied by politics and pound signs at least two of their best players.

Yet even without stellar talents like Chris Gayle and Ramnaresh Sarwan, they found fight and resolve where recent touring teams have fallen away.

"There were a lot of media guys who had checked out of their hotels, who had started booking tee times on golf courses for Monday," points out Richards. "Credit must be given to the West Indies for dragging it out that long.

"Every time you have a Test match that gets close, then the 'if' factor comes into play - what if Trott had been given out on Sunday night, what if we had taken other chances earlier.

"The 'if' factor doesn't take away the fact we still lost again. But it was a spirited effort, and if I was one of the guys in the dressing room then I would feel I had a chance going into the next Test.

"This team can get better. They can learn from their mistakes and misfortunes, and if they can put all their collective positives together, they can develop into a good unit.

"A lot of folks wouldn't have expected this could go into a fifth day. There were a few missing pieces of the jigsaw puzzle, but if the West Indies can find them then they can go that one step further.

"They can leave Lord's knowing that they put up a good show here."