A special era for England and their supporters

These are curious times for English cricket.

Not so long ago a series win was a cause for national celebration. Slightly longer ago it was such a rarity that there would also be genuine surprise.

That we have become so accustomed to victory that a nine-wicket win - making it seven series wins at home in succession - prompts admissions from skipper and sages of a lack of ruthlessness speaks volumes for how significantly ability and expectations have shifted since then. 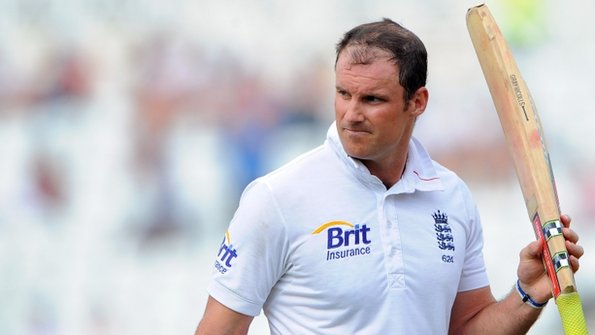 The pressure is now off captain Andrew Strauss after England take a 2-0 series lead against West Indies. Photo: Getty

Those who had made the trip to Trent Bridge on Monday were certainly celebrating as England went 2-0 up in the three-Test series. Choruses of "if you're happy and you know it clap your hands," echoed round the ground as Jonathan Trott struck the winning runs.

Elsewhere there were logical caveats: it's only the West Indies; it's only at home; don't forget the winter. But in the detail of England's win were reasons aplenty to revel in a special era for England and their supporters.

As Andrew Strauss and Alastair Cook set about calmly knocking off the 108 needed for victory, they eased past another landmark - 5,000 runs in partnership at Test level, by a distance the highest aggregate of any England pair.

As an opening combination they are unsurpassed in English history. Only two other pairs - Haynes and Greenidge, and Langer and Hayden - stand above them as more prolific Test openers.

If those statistics give pause for thought, Strauss's successes in the summer so far should keep the numbers ticking over for a while to come.

After a troubled winter and 2011 prior to that, this short series has proved the ideal balm for the captain. With 309 runs from four innings at an average of 77, he has been the premier batsman on display. With 21 Test centuries he is just one off the record jointly held by Wally Hammond, Colin Cowdrey and Geoff Boycott. At some stage over the next 12 months he is likely to pass them.

So too is Kevin Pietersen, currently on 20. Alastair Cook, 19 to his name so far, will follow suit; Ian Bell, with 16 at the moment and arguably with at least another five years in Test cricket ahead of him, could yet do the same.

However strong your attachment to the heroes of old, that is a remarkable demonstration of the depth and class of England's current batsmen - and the same can be said of the bowling attack.

A little lost in the arguments about player rotation for the third Test was perhaps the key reason why England are even thinking about resting James Anderson and Stuart Broad - because they can afford to.

England currently have four players in the world's top 15 ranked bowlers. Not since 1958, when the likes of Trueman, Statham, Tyson, Laker and Lock ruled the roost, have they had so many so high.

Just as during the last Ashes, when they could lose Broad to injury and drop their leading wicket-taker in the series (Steve Finn) yet still win the next two Tests, they have a strength in depth that allows rotation without significantly weakening the attack.

Finn and Graham Onions both await their chance having played key roles in winning the last two Ashes series. Chris Tremlett, when back to full fitness, would stride into any Test side in the world.

It's easy to forget that Trent Bridge man of the match Tim Bresnan is a second choice himself. Yet here is a man who has won every one of the 13 Tests in which he has played, and who has a significantly better Test bowling and batting average than Andrew Flintoff.

Freddie averaged 32 with the ball and 31 with the bat. Bresnan is currently on 25 with ball and 40 with bat. There was of course more to Flintoff's career than mere numbers. But England's current strength in depth is enough to make national skippers of the 1980s and 1990s bilious with envy.

The same cannot be said of the West Indies who appear to be a two-speed team. At times in both Tests they have shown great application and perseverance, only to then capitulate at a dramatic rate.

In Marlon Samuels, Shivnarine Chanderpaul, Kemar Roach and Darren Sammy they have a nucleus of a combative side. In the top order they do not.

In comparison to the successes of Strauss and those immediately after him, the West Indies' top four batsmen have scored 203 runs between them from an aggregate of 16 innings. Not one of them averages more than 19. Poor Kirk Edwards, so at sea that you expect him to walk to the wicket trailing distress flares, is averaging two.

Only so many times can you be rescued by those below you. If the Windies boat is no longer sinking with all hands, it is still listing badly.

"There are some natural flaws in terms of techniques," says Sir Viv Richards, perhaps the greatest West Indian batsmen of them all and in England this summer as a Test Match Special analyst.

"The top four failed to come to grips with the requirements for the conditions they were facing from pitch and bowlers.

"You only need to look at how Samuels and Sammy played in the first innings to see how different it could have been. Even at the point they came in, with six wickets down, they played the pitch rather than the situation.

"It was easy for batting - they should have gone on. There were runs out there to be made. These guys are filled with lots of ability. When you look at young Kieran Powell in the first innings, he got to 33 looking good. If you can't play, you won't get to 33.

"But the ball he got out to was the sort he had been leaving up to that point - and should have been leaving again. Test batting is all about what you have mentally, and if you can't equip yourself with what you need in the middle then you need to find another job."
Dominant in the decades when England languished, the West Indies have now not won a series in this country since 1988.

If it is a ghastly time for them, it does not take the gloss from England's accomplishments. In the bad times there was no escaping the misery. Perhaps the good times should be relished in similarly unfettered fashion.