Everyone gets anxious before job interviews. After England's thrilling 24-22 win over France in Paris on Sunday afternoon, Stuart Lancaster might feel rather more confident about his next one.

You can imagine the first question after England's caretaker coach sits down in front of the five-man panel who will decide the identity of England's permanent coach: "So, Stuart. What qualities do you think you bring to this position?"

"Well... I've just orchestrated a heart-stopping win over the World Cup finalists on their own patch, pulled off by a team of inexperienced newcomers against vastly more experienced opponents, just a few months after they ended the reign of my predecessor.

"I've done it in a stadium where the opposition had only lost one Six Nations match in their last 17 and not since 2008, with a starting XV that was giving away 426 caps to the hosts, despite being down to 14 men - possibly unfairly - for 10 minutes at a critical point in the game.

"That means I've won all three of my away games in the Six Nations, the first time any England coach has done that in the tournament's history. 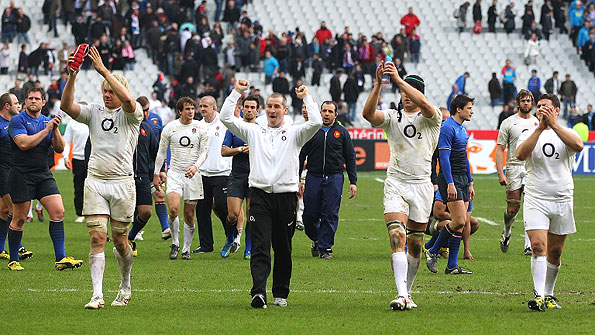 "I have also, if the reaction of the supporters at the Stade de France and on BBC blogs is anything to go by, made people excited about the England team again, and brought contentment and commitment back to the squad itself.

"I've given untried tyros their international debuts in big pressure matches, at a time when most coaches would have played it safe, and been rewarded by watching them blossom into the sort of players who could sparkle in the side for years to come.

"Oh yeah - I've been in charge for only two months, I've done this without a multi-million pound contract and the media seem to like me. Next question?"

Back to reality. This was by no means a faultless performance from England. After a hugely impressive first quarter, a combination of indiscipline, immense French pressure and some interesting decisions from referee Alain Rolland opened a door that more streetwise sides would have slammed shut.

Eleven penalties conceded, to just four from Les Bleus, created its own problems. At times England could have played a smarter tactical game, kicking for territory rather than opting to run or rumble with every scrap of second-half possession.

Had Francois Trinh-Duc's horrible wobbler of a drop-goal attempt in the penultimate minute not fallen under the crossbar then all the effort and improvement would have been for naught, just as critics could argue that better Scottish finishing and half-decent Italian kicking could have cost them those victories last month. 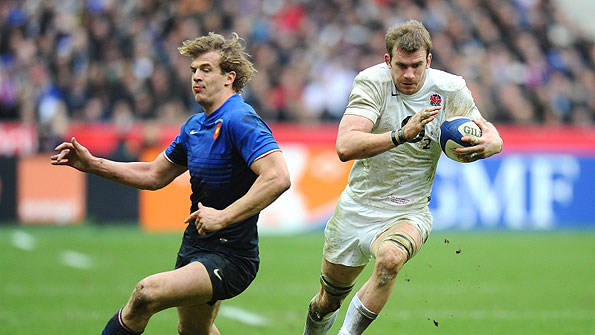 Yet win they did, against significant odds and in the most testing of circumstances, in the process answering more of the questions that had been asked of Lancaster and his young revolution.

Coming into the match England had scored just two tries all championship, both of them charge-downs, fewer than any other side. Not only do they lack creativity, came the criticism, but they are playing not to lose rather than to win.

Two tries in the first 15 minutes, both of them beauties, countered that accusation. Tom Croft's rampaging match-winner with 10 minutes to go went further still.

Perhaps we should have expected it - only once in their last 11 Six Nations meetings have England failed to score a try against France - but after just three line-breaks in three matches, the three in short time on Sunday were timely validation of the coaching team's credentials.

Against Wales England were undone in the last five minutes, the win stolen away from them by a smarter side who knew how to win those sorts of nervous nail-biters.

A fortnight later they stood firm. Seven days ago France had come back from 17-6 down at half-time to snatch a draw with Ireland. Tireless tackling (111 to France's 59) and Croft's rampaging run ensured that there would not quite be a repeat.

In Croft England had the outstanding player on the pitch, even allowing for the usual indefatigable display from France skipper Thierry Dusautoir. At the line-out, in the loose and at the breakdown the Leicester flanker was immense, back to his Lions form of 2009 with a snarling vengeance.

Alongside him in the back row Ben Morgan was similarly dynamic, but the pack as a whole were unrelenting and undaunted until the late injury to replacement Phil Dowson robbed them of balance.

Manu Tuliagi punched holes, Brad Barritt filled them. Lee Dickson kept the delivery fast and snappy, Owen Farrell's kicking composure and decision-making with ball in hand once again belied his years. That it came amid one of the more controversial displays from Rolland adds further gloss.

Refereeing at the top level is an unforgiving pursuit. But in deciding to overturn a free-kick to England and hand a kickable penalty to France for Chris Ashton's minor contretemps with Aurelien Rougerie he left experienced observers scratching their chins, and to sin-bin Charlie Sharples for a deliberate knock-on having moments earlier just warned the impressive Wesley Fofana for the same offence made little logical sense.

Lancaster could afford to be diplomatic afterwards. By then he and his team had enjoyed a lap of honour in front of the delighted travelling support. "If you'd told me 10 years ago when I was teaching PE that I'd be doing that," he said afterwards, "I'd have bitten your hand off."

He may have to get used to it. Nick Mallett was supposed to be nailed on for the permanent role. He has vastly more experience of top-flight coaching than Lancaster, more honours, a track record like few others.

Lancaster is still just four games into the job. A lot can still go wrong from here. Should Ireland win at Twickenham next week, England could yet finish fourth in the championship, a year after they won the thing. Suddenly progress might look a lot more like regression.

But let's ask ourselves a theoretical question: if Mallett had taken over in January and produced the same turnaround as Lancaster and his lieutenants Graham Rowntree and Andy Farrell, wouldn't he be hailed as a masterful man-manager and tactician?

Instead, if he were to come in now, he would have to impose his own culture, playing style and personnel on the squad - all of which might be completely different to those of Lancaster. Rather than being the safe bet he might gradually be appearing more of a gamble.

Mallett, we are told, has already had his interview. He has the longer CV. But the recent entries on Lancaster's are looking increasingly persuasive.