If there were no exuberant celebrations from Stuart Lancaster this week to match the light-smashing fist-pump that left him needing stitches in Edinburgh, England's interim coach will leave a frozen Rome with a warm glow of satisfaction in his belly.

With just over half an hour of the match to go, Italy leading by nine points and England shipping four penalties in quick succession, history of the most unpalatable sort appeared about to be made.

Italy, famously, have never beaten England in 17 Tests, and have lost on all 12 occasions the two sides have met in the Six Nations. That the wait goes on for another year indicates that Lancaster and his new-look team might just possess the combination of character, luck and fortitude essential to all improving sides.

As with the win over Scotland, this was no great leap forward by England. The snow that fell in great wet lumps all afternoon may have covered the pitch at the Stadio Olimpico, but it could do little to disguise the visitors' struggles in a first half that never looked likely to warm the cockles. 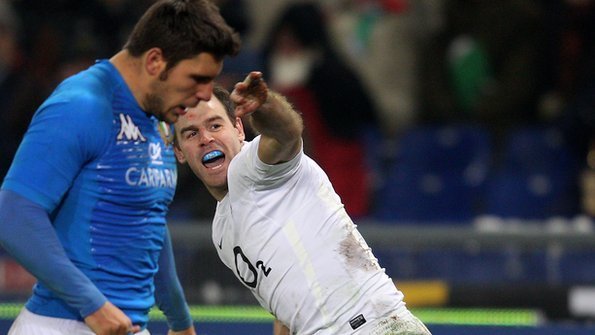 Line-outs were lost, ball kicked away, two tries handed over on silver platters to leave the Eternal City believing that the endless wait might finally be over.

Had Italy showed the same accuracy with their place-kicking as the hugely impressive Owen Farrell, it would have been.

If the conversion Kris Burton missed was excusable, he had time and space to do far better with his second half drop-goal attempt. Both paled into comparison with the horrors of his replacement Tobias Botes, who hit his first penalty as if it were a balloon and his second like a sack of cement. So abject were the efforts that Italy coach Jacques Brunel must have wished he had left his kicking Botes at home.

The post-game stats told a tale of equality: 85 tackles made by both sides, Italy missing four to England's five, the Azzurri winning ball 84 times in open play to the red rose's 81. For England to be the ones to wrestle victory from such a position is therefore deserving of praise and respect.

In such a tight match one would expect the more battle-hardened outfit to prevail. But it was Italy - 698 caps in their starting XV, another 116 caps on the bench - who wobbled, England (just 248 caps across the team, and eight players with 10 appearances or less) that held firm.

To score 13 unanswered points in eight minutes, when crowd, conditions and momentum are all against you, takes a certain bottle and belief.

The epitome of those virtues was Farrell, belying his tender years with a faultless display of pressure kicking to go with some big hits in defence. Dan Cole was effective in both tight and loose, while replacements Ben Morgan and Lee Dickson lifted the pace and intensity dramatically in the half-hour they were on the pitch. Both should start against Wales in a fortnight's time.

There was luck alright. Lancaster was honest enough to admit afterwards that two charge-down tries by Charlie Hodgson in the space of eight days was an unusual way to win a pair of matches, although backs coach Andy Farrell was keen to point out that pressuring opposition kickers was something his runners had spent hours working on in training.

Neither did all the fortune work in England's favour. Giovanbattista Venditti's try owed more to pinball than precision, and Phil Dowson could have had his first international try had referee Jerome Garces not already blown for Burton's trip on David Strettle.

England's superior points tally was a reward for territorial supremacy - they spent 13 more minutes in their opposition's half than Italy did - and, in conceding just nine penalties over the 80 minutes, maintained the discipline under duress that had been one of the stand-out features of the win at Murrayfield.

Italy, despite the usual brilliance of skipper Sergio Parisse, made almost twice as many errors as England as frozen fingers fumbled possession and solid English defence loosened grips still further. On such margins do tight matches turn.

The evidence of the last three weeks suggests Lancaster is a good man-manager and positive force for his developing team to coalesce around. What we saw on Saturday was a first real glimpse of his coaching skills under pressure.

By tweaking the tactics at half-time ("get the ball and move it, use the first receiver more, don't play everything off number nine") and blooding Morgan and Dickson at a stage when more conservative coaches would have left Dowson and Ben Youngs to battle on, the interim man did his permanent prospects no harm at all.

"Relieved would be one word; proud would be another," said Lancaster afterwards. "We didn't do everything right, and we recognise that we still have a long way to go. But the most pleasing thing is that there was no sense of panic."

This result also needs to be set in against the context of English supporters' expectation.

This one will be welcomed with more optimism than both in part because of how low England's stock sunk during the World Cup, and in part because it is built on fresh talent like Farrell, Morgan and Brad Barritt rather than loyal old toilers like Borthwick.

Much mention was made before the match of the fact that Rome wasn't built in a day, which rather ignores the fact that no city ever was. But two wins out of two will serve England rather well when many feared the reverse was more likely.

Wales are likely to be less profligate than Scotland and more ruthless than Italy when they visit Twickenham in a fortnight. France at the Stade de France may be tougher yet. England have beaten the two weakest sides in the tournament.

But they have also done it away from home, in front of hostile crowds, against vastly more experienced players. With proven performers of their own to bring back in the next two weeks - Toby Flood, Courtney Lawes, Manu Tuilagi - the future looks brighter than the recent past.