Why are New Zealand so good at rugby?

On Sunday night, New Zealand will run out at Eden Park as clear favourites to be crowned world champions for the second time.

Many rational judges cannot see them failing. Even if France do pull off one of the great upsets and deny them the Webb Ellis Cup, the All Blacks can still lay claim to being - historically, consistently - the best team in world rugby by a country mile.

Controversial stuff? Not really. Since the start of Test rugby, the All Blacks have a win percentage of almost 75%. No-one else gets close. Not South Africa at 62%, nor France at 55%. Certainly not England, Australia or Wales with 53%, 52% and 51% respectively.

How has one small nation dominated the sport for so long? What makes New Zealanders so good at rugby? And why, World Cup wins aside, is that supremacy actually growing? Since Graham Henry took charge of the national team in 2004, New Zealand's win percentage has climbed to a staggering 85%.

Rugby grabs Kiwi kids young. Once it has a hold, it's not allowed to let go. Buck Anderson, former All Black, rugby teacher and coach, now heads the New Zealand Rugby Football Union's heavily funded community programmes. "Everything we do is about four key skills: catch, pass, run and evade," says Anderson.

A few years ago, Anderson found that 90% of primary school teachers in the country are female. Surveys showed that even those who enjoyed watching rugby were reluctant to teach it, partly for fear of kids getting hurt and partly because the rules are so complex.

The answer: Rippa Rugby, a non-contact, small-sided version of the game that can be played anywhere, by kids as young as three years old. Every single primary school in New Zealand has a grass playing field. After a five-year campaign, every primary school in the country also has a Rippa Rugby kit and instruction DVD.

"We've had year-on-year growth in the number of primary school kids playing rugby, and Rippa Rugby has been a really big driver in that," says Anderson. "The landscape for the hearts and souls of kids today is very competitive. There's an incredible range of opportunities out there for them. We had to ask ourselves how we could make rugby as easy to play and as fun as possible." 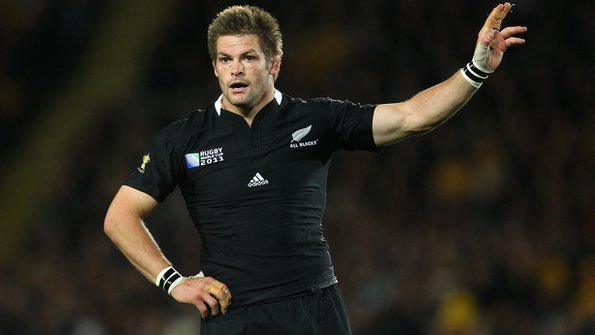 Richie McCaw has played over 100 times for New Zealand and holds the record for the most capped captain of the All Blacks. Photo: Getty

Rugby has a dominant place in Kiwi culture to an extent that's unmatched in almost any other country in the world except, perhaps, Wales. In England, Scotland and France, there are significant geographical variations in rugby union playing and watching. In Ireland and Australia, it's traditionally a product of social background and schooling.

Professor Toni Bruce, from the University of Auckland, is New Zealand's leading sport sociologist. "We had early success at rugby at a time when nation building was a very important thing," she explains.

"The 1905 tour of Great Britain moved into mythological status, because it happened when Britain was the dominant force in world politics. New Zealand beating British teams at rugby was used by politicians to promote the virtues of the healthy, virile Kiwi lifestyle.

"Rugby was incredibly successful from then on. The seed took root and grew. Early New Zealand culture was very masculine - there was a high proportion of males to females - so it's not surprising that so male a sport became so central in society. The rugby club became the essence of most small communities. Whether you were interested in the sport or not, everyone went to the club. It became a de facto community centre."

Once bitten by the bug, kids are fed through a carefully designed series of programmes, starting at the age of five with the ingeniously named Small Blacks. "We try to line up the skills required with the ability of the kids to perform those skills," says Anderson.

Between the ages of five and seven, there are no set pieces, no tackling and no kicking. Aged eight onwards, defence skills are introduced - "We teach them to watch the hips, not the ball or the feet; where the hips go, the player follows" - with non-pushing scrums, catching above the head to develop line-out skills and limited post-tackle drills. The pitch is still small while the ball is no bigger than a size three.

Only from 11 do kids take part in 15-a-side games - and even then it is all about ball in hand. Penalties result in possession being handed over, rather than kicks at goal. 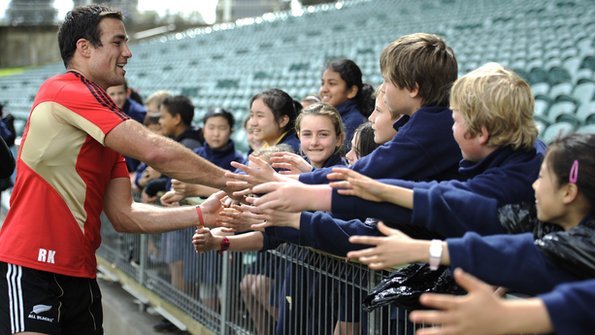 New Zealand kids have been fortunate enough to meet heroes such as Richard Kahui during the World Cup. Photo: AP

Rugby is taught in both state and private schools. The quality of coaching there, as my colleague Ben Dirs found out when he visited Rotorua Boys' High a few weeks ago, is both impressive and prioritised. But the education system is only one part of the rugby development programme.

Kel Victor is president of the prestigious High School Old Boys club in Christchurch, which has produced 30 All Blacks in its 110-year history, including Justin Marshall, Andrew Mehrtens, Aaron Mauger and Dan Carter.

"We have kids here from three years old," he says. "They play Canter rugby, which is like touch rugby - no tackling allowed, teams of no more than 10, a point for a try. There is a much bigger emphasis on running the ball rather than kicking it. That structure is bred into them - get the wingers involved, get the full-backs running into the backline.

"The standard in the club game is very high. There are 12 teams in the metropolitan region and another union in the country region. Six of them are very strong, with not much difference between them. It's very competitive and helps develop good players."

The grip that rugby has on the national psyche has waned at times over the years, never more so than when an All Blacks team hosted an apartheid-era Springboks touring team in 1981. The success of the national football team, the All Whites, at the last World Cup also loosened rugby's grip - but only slightly and only briefly.

"Traditionally, there has been a fundamental insecurity in New Zealand national identity," says Professor Bruce. "We are constantly searching for who we are and where we are in the world. Sport is one of very few places where New Zealand has excelled on the world stage and so our internationally successful athletes always get a high level of publicity."

Turn on the television on a Saturday morning and there, on the free-to-air TV2, is a programme called Small Blacks TV. It speaks volumes for the continued place of the All Blacks in the affection of the nations.

So much for the finer detail. When you look up from the research and history books at the physical environment around you, it's hard to miss what's staring you in the face.

"Our climate and landscape is so conducive to kids running around," says Anderson. "Most houses have a back yard where a kid can fling a ball around and every town or village has open green fields. That's a major advantage for us."

Stroll around any New Zealand town and you soon notice something very striking to British eyes. Where kids back home will be kicking a football around, or a tennis ball, or even a squashed-up drinks can, Kiwi children will have a rugby ball in their hands.

"That constant playing with the ball as a child is often how you learn the key skills in the game," says Anderson. "Kids walking home from school will be trying new passes or skills to impress their mates. You go to the park or the beach in New Zealand, and the first game everyone will play is touch rugby.

"New Zealand is also blessed with a wonderful genetic mix for rugby. In addition to the European influence, you can add in the size and attitude of the Maori and now the speed and power of the Polynesian islanders."

All is not entirely rosy in the Kiwi garden, however. There is, for example, a high drop-off rate once players get to their late teens. "We can't take anything for granted," admits Anderson. "We're a country of just four million people and we need to attract the top sporting talent - give them the skills and keep them in the game."

Other nations have detailed kids' development structures. Some have a flourishing professional club structure. Others have big-name players who are huge stars, recognised wherever they go. But only one country has everything that those rivals have - and that 75% win ratio on top.