The rugby outlaw who never came back

When New Zealand run out on Sunday for their first World Cup final in 16 years, the posher seats in the Eden Park grandstands will be packed with All Black greats from down the years - Colin Meads, David Kirk, Wayne Shelford, Tana Umaga and so on.

But there is one legendary figure in New Zealand rugby folklore who has not been invited. Even if he had been, he wouldn't have come.

The story of Keith Murdoch is one of sport's more extraordinary epics: the hard-drinking, hard-punching loner who, hours after scoring a match-winning try for his country, was involved in an incident that resulted in him becoming the only All Black to ever be expelled from a tour. He then ran away in disgrace into the Australian Outback, never to see his team-mates again.

It is also, with New Zealand on the brink of equalling the greatest moment in their rugby history, a cautionary tale of what sporting fame can do to ordinary men caught up in the whirl of media hoopla and public expectation. 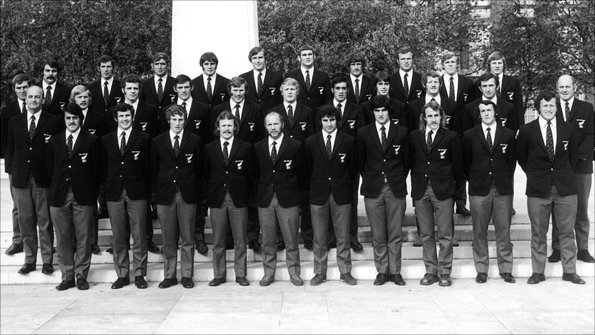 Country boy Murdoch - 17 stone, Zapata moustache, a cross between Norman Hunter and Giant Haystacks - was already infamous in rugby circles when he arrived in Britain with the All Blacks for their 1972 tour.

Stories abounded of his fearsome strength and love of booze: the time he towed another man's car to the garage by holding the rope between the two vehicles in one hand; the occasion he missed a game against the Lions after falling asleep under a tarpaulin on a moored fishing trawler and waking up at sea, a two-week voyage ahead of him.

He was also, according to BBC rugby correspondent Ian Robertson, an "awesome prop forward". But his life would change forever after what should have been the best game of his life - the brutal 19-16 win over Wales in Cardiff on 2 December, 1972.

Late that night, with the All Blacks team celebrating their win in the Angel Hotel on Castle Street, Murdoch was confronted by security guard Peter Grant as he went hunting through the kitchens for more beer. Insults were thrown, then punches. Grant, at 6ft 4in the taller man, was knocked to the ground before other staff stepped in.

Murdoch woke up the next day expecting to apologise and no more. Instead, with British rugby officials and newspapers piling pressure on Kiwi tour manager Ernie Todd, he was told he was being sent home.

His team-mates were horrified. Far spicier things had happened that winter, or indeed on the Lions tour the previous year. But they were about to get worse.

Murdoch, an intensely shy and private man, was put on a plane back to New Zealand. Knowing that an army of reporters awaited him in Auckland and appalled by the tag of "national disgrace" that newspapers had given him, he made his fateful move: jumping off the plane at Singapore, adopting an assumed name and boarding instead a flight to Darwin. He would never be seen in public again.

New Zealand was left both stunned and spellbound. Imagine Mike Tindall disappearing in Dubai as the England team flew back from this World Cup's dwarf-throwing allegations, or Andrew Flintoff vanishing after his drunken pedalo antics at the 2007 World Cup.

Attempts were made to contact him, to bring him back into the fold. All failed.

With every year that passed without a sighting, the mystery deepened still further. Terry McLean, doyen of rugby writers, called it 'a Shakespearean tragedy'. "People haven't stopped talking about him for 39 years," says Robertson.

Murdoch, now 68 years old, continues to resist all attempts at being tracked down. Working as a farm labourer and bulldozer driver, he lives an itinerant life, following seasonal work across Queensland and the Northern Territories.

Very briefly, 22 years ago, he returned to his homeland. When rumours of his arrival reached the media, he fled back to the Outback, never to touch New Zealand soil again, losing all contact with his family and even missing his beloved mother's funeral.

Bryan Williams was Murdoch's All Blacks team-mate and his friend. "He obviously feels a sense of guilt about it," says Williams. "He has resisted all attempts to get him to any reunions. I don't think he's ever truly recovered."

Neither did his All Blacks captain, Ian Kirkpatrick, who was stricken with guilt over his own role in the affair. "His ultimate regret was that he did not say he would be with Murdoch on that plane along with the other 28 players," says Robertson, present at the match in Cardiff that fateful day. "He still worries to this day that he did the wrong thing."

Murdoch scores against Wales in 1972

With the World Cup final just days away, Murdoch's name is once again in the newspapers. Margot McRae, the only journalist to have successfully tracked Murdoch down in Australia, has written a play about the drama that has just opened in Auckland's Q Theatre.

"It took me three months of dogged research until I found him in a little town called Tully in Queensland, late in 1990," McRae told BBC Sport.

"I think if it had been a male reporter I would have been biffed out pretty quickly. We sat down and talked for about an hour, but it wasn't an easy conversation.

"He was a deeply shy person, not very articulate. He felt it was better to be quiet than be embarrassed. He was not going to come home and be confronted by reporters.

"He was an ordinary man caught up in extraordinary circumstances. To be pounded by media attention would have been hell for him. He never talked about it to his friends, or his team-mates, never asked for sympathy, never wanted to be the centre of attention.

"There was a real sense of a wound that's never healed. There must be a sense of humiliation he feels about it."

Murdoch refused to speak on camera. McCrae, desperate to pull off such a huge scoop, secretly followed him with a film crew - something she regrets to this day.

"He was out in the bush, slashing away with a machete. The camera crew were a hundred yards behind me, but they were afraid. Then he heard me. The slashing stopped and there was this moment's silence. Then he just ran away."

McCrae's experiences have left her wary of what today's All Blacks stars may go through, especially if they leave the Eden Park pitch this weekend as the first New Zealand team to hold the Webb-Ellis Trophy in almost quarter of a century.

"It's this building up of heroes and villains that we do so much in sport, especially in this country with rugby," she says. "What are the implications for these ordinary blokes caught up in this?

"Keith never wanted to explain himself. Nowadays they have no choice. If some poor All Black gets drunk, he has to apologise to the media.

"They become iconic figures, but they're just guys, good and bad. We love our heroes and villains, but it's always more complicated by that."

No one knows where Murdoch will be when the game kicks off on Sunday, or even whether he will bother watching it on television. If that sets him apart from four million of his compatriots, it's been that way for a long, long time.