The roadside sign just outside the tiny town of Te Kuiti spells it out for you in foot-high letters: "Welcome to MEADSVILLE. Please leave soccer balls in the bins provided."

With the whole of New Zealand apparently knee-knockingly nervous about the prospect of taking on arch-rivals Australia in this weekend's World Cup semi-finals, I have driven four hours deep into its rugby heartlands to seek counsel from a man who, more than any other in history, represents everything it means to be an All Black.

Voted his country's player of the century, described by former All Black coach Fred Allen as "the greatest ever, anywhere", Sir Colin Meads is to New Zealand what Bobby Charlton is to England or Don Bradman was to Australia.

He is also, as any rugby scholar will tell you, infamously - frighteningly - hard. Which is why, when he lumbers into the old wooden Waitete clubhouse and fixes you with an unblinking stare, all you can think is how much his handshake is going to hurt. 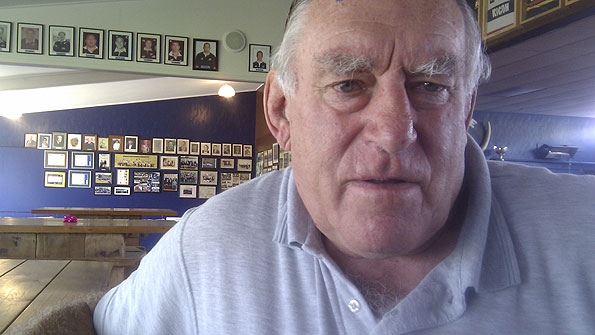 "Ah, the dirty play was part of the whole game," he tells me, with a wink. "You're just playing for the team, you just want to win.

"I wasn't that hard. Now (Springbok) Martin Peltzer, he didn't muck around. Martin only had one eye, and after one Test match and four provincial games we still didn't know which was the one that worked and which one didn't."

Former All Black half-back Chris Laidlaw memorably described Meads as a Darth Vader of the rugby pitch. It's an image that first appears at odds with the affable 75-year-old man sitting opposite me. Then the blue eyes twinkle, and the stories of casual violence start to flow.

"On tour in France in 1968 I had a big old tussle with Benoit Dauga," he remembers fondly. "He was the player who apparently was going to beat New Zealand, and in all the team-talks he'd be saying, 'Let's see who's the best player after the game; and all that."

Early in the game, Meads was kicked in the head by a French boot, opening up a bloody gash that would later need 18 stitches - taken without anaesthetic, in case you were wondering.

"I thought it was Dauga, so I just said to the doctor, hurry up, I want to get back out there and kill this bugger.

"I spent the rest of the game getting after him. I plastered him so hard that I cut my hand open, and that ended up turning sceptic.

"After the match I'm sitting there with this towel round my neck, soaking up all the blood. Benoit comes over. I'd broken his nose, and he was stammering, pointing to his face and asking, 'Why?'

"I couldn't believe it. I point to my head and say, 'That's why, you dirty so-and-so. Then he splutters, 'Non... non - Plantefol! Alain Plantefol!' Turned out was another fella who'd done me. So I made a big mistake on that one."

The fisticuffs should not fool anyone into thinking that Meads could not play rugby like a rampaging dream. From his international debut as a 20-year-old to his final cap in 1972 he was a virtual ever-present at lock or back row, making 133 appearances for the All Blacks and playing in what was then a staggering 55 Tests.

As a farming lad defined by his no-nonsense attitude and hard work, the man who became known as 'Pinetree' defined a Kiwi archetype - rugged, uncomplaining, uncompromising. 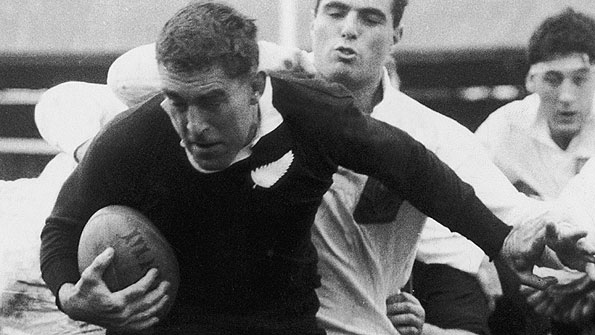 At 6ft 2ins and weighing around 14 stone he was small by modern-day second row standards. But those relentless hours working on the family farm developed a physique so powerful that, as the great BBC commentator Bill McLaren once remarked, he "carried the ball in his hands as though it was an orange pip."

"Dad had bought a 400-acre block of what we call scrub, and in summer you'd have to chop back this scrub," says Meads. "We'd have to slash at it, cut it back by hand, starting early in the morning.

"The big thing was taking enough drink to get through the day, and then be able to run home with all this gear. So that work was part of our training. You were working like bloody hell. We used to pray for the rugby season to come round, because it meant we could knock off early to go training."

Meads and his brother Stan, also an All Black regular, enjoyed a training regime that sounds equal parts wonderful and terrifying.

Before setting off for Te Kuiti I had received an email from the current head of King Country rugby. "Tom. Word of warning, don't stop for a drink with Tree. It's dangerous!" As the shutters on the bar behind us are pulled up, it all suddenly makes sense.

"We used to have two or three beers after training, always," says Meads. "We were allowed to - we weren't breaking any rules. Now a lot of these things seem to be frowned upon."

He sounds both wistful and disappointed. "A lot of players today drink juices, Fanta and things like that, and I think they're worse for you than beer, personally.

"We always had a big session after every game. We never had water on the field - we were never allowed to have water before a game. We'd have a cup of tea at lunchtime, and that was your last drink until after you played, because we were told by experts that if we drank water we'd get cramp." He raises his Denis Healey eyebrows and grins. "There must be a hell of a lot of cramp around nowadays."

Unsurprisingly, a series of myths have built up around Meads. Was it really true, I ask him, that he broke his arm playing Eastern Transvaal and yet carried on playing?

"Yeeaah. I went to the sideline, and the doc looked at it and said, 'I think you've just pinched a nerve'. Really? I'm not going off for a bloody pinched nerve. So I carried on playing.

"But I knew it wasn't right - there was something terribly wrong with it. I couldn't hold the prop. You know something's wrong when you can't move your hand."

A second famous story has Meads training by running up and down the King Country hills with a sheep tucked under each arm.

"Now that is a myth. A photographer called in to the farm to take some pictures of me and Stan, and I was coming home with a mob of sheep for dipping.

"Dad had this thing that every sheep had to go through that dip or have its throat cut. It was a fairly long walk for them down from the fields and they were buggered, so I had one under each arm. This photographer takes a picture of it, and that sent the myth around that I was training with them."

Meads' playing career was ended by the broken back he sustained when crashing his Land Rover, although that didn't stop him tearing the IV drips out of his body in hospital and attempting to walk home.

Almost 40 years on, the effects of those all those war wounds have left him craggy-faced and a little stooped, a Pinetree bent in a strong southerly.

While the prospect of an All Blacks final is enough to have him rubbing his mighty hands together, it also brings back bad memories of the last time New Zealand were within touching distance of the Webb-Ellis trophy.

In 1995 Meads was team manager when, two days before the final against South Africa, his squad was laid waste by food poisoning.

"We were all in trouble that night," he recalls. "In farming terms, I was like a cow with staggers - nothing works, your feet go sideways... I collapsed on the floor trying to get to the toilet.

"It all happened from the Thursday lunch. I always thought it was in the milk - Jeff Wilson and Andrew Mehrtens said they were on the chicken burgers."

By that night almost the entire All Blacks team were incapacitated. It was then that Meads made a decision that haunts him to this day.

"We never told anyone before the game, and that was my call. I said, we don't want those bloody Springboks to know we're ill. Don't tell anyone at home, no-one's to know about this, we'll get through it.

"But we didn't get through it, and when you try to tell everyone no-one then believes you. That was the sad part for me. On reflection I should have said well, we're not playing."

A group of Wales fans have gathered in the clubhouse, taking a diversion en route from Wellington to Auckland to stare at All Blacks shirts on walls and gape at the great man before them.

For a second I am distracted, and then I realise what Meads has just said.

You would have called off the World Cup final?

"We were by far the best team at the tournament. We were playing terribly well. But good luck to the Springboks - they played well, and for rugby the way it all turned out - with South Africa being out of the international game for so long, it was a great result."

As I take my leave a few minutes later, Meads is holding court in front of the star-struck Welsh fans.

The barman looks at me in surprise. "You're not staying for a beer?" Like a fool I mumble something about writing the blog and the journey home. Meads looks up, grins, and waves goodbye.

And his handshake? Monstrous. Like being wrapped up between two sides of beef.