There are hard-luck stories in sport, and then there are the real hauntings.

Wales' one-point defeat by France in this tumultuous World Cup semi-final was the sort of horrible heartbreaker that could leave Welshmen sleepless at night until the Severn flows uphill and Cardiff crumbles into the sea.

Most close-fought contests have their fair share of almosts and nearlys. This 9-8 loss had all of those, and enough whys, if onlys and what ifs to drive a man to madness and back before breakfast. 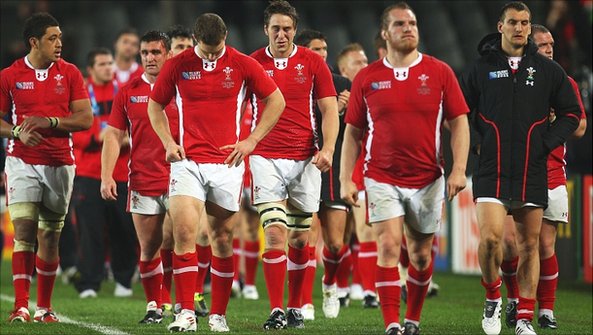 Wales players show their dejection after their semi-final loss to France. Picture: Getty

What if Stephen Jones's straightforward conversion of Mike Phillips's try had gone over, rather than hitting the post? Why did the ground have to give way under James Hook's standing leg as he prepared to stroke over a penalty? So nearly did Leigh Halfpenny's late long-range penalty attempt clear the crossbar that hearts stopped beating from Auckland to Anglesey.

Overshadowing every single one of those incidents was the single most controversial decision of the entire tournament so far: referee Alain Rolland's decision to send off Sam Warburton, Welsh skipper and turnover tornado, for dangerous play.

Some red cards stand out a mile. To those of us watching from the stands, this was not immediately one of them.

When the 23-year-old up-ended Vincent Clerc with 18 minutes gone, most of us winced a little and wondered if a sin-binning might follow. That Rolland went straight for red instead led to first confusion - did that really happen? - and then hands-on-head shock.

That it changed the course of the match is beyond doubt. Whether Rolland made the right decision is not.

It was to law 10.4 (j) that most first turned: "Lifting a player from the ground and dropping or driving that player into the ground whilst that player's feet are still off the ground such that the player's head and/or upper body come into contact with the ground is dangerous play."

Warburton certainly appeared to lift Clerc. Beyond that we enter into a maze of interpretation and nuance that will lead to bitter arguments for years.

On 8 June 2009, the IRB's Paddy O'Brien sent out a memorandum to his referees with the subject line 'Dangerous Tackles'.

"In 2007, the IRB Council approved a ruling," it read, "which essentially made it clear that tackles involving a player being lifted off the ground and tipped horizontally and were then either forced or dropped to the ground are illegal and constitute dangerous play.

"At a subsequent IRB high performance seminar referees were advised that for these types of tackles they were to start at red card as a sanction and work backwards. Unfortunately these types of tackles are still being made and the purpose of this memorandum is to emphasise that they must be dealt with severely by referees."

If that explains the background to Rolland's red, it doesn't end the debate.

"There was no malicious intent," insisted a stony-faced Warburton afterwards. "I thought it was a normal tackle. As soon as I hit him I felt like his body weight took control of what happened. I'm devastated." 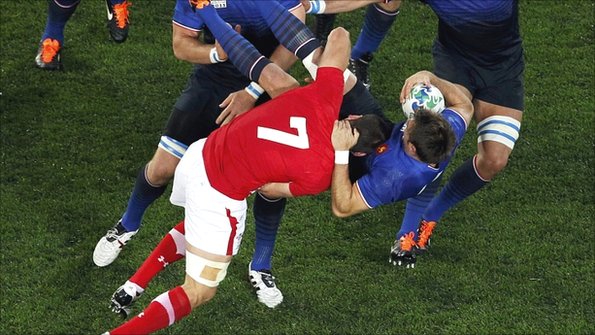 The repercussions of Warburton's tackle were pivotal to the outcome of the game. Picture: Reuters

Rolland would be within his rights to ignore any such plea. At the bottom of O'Brien's memorandum was another key paragraph.

"Referees...should not make their decisions based on what they consider was the intention of the offending player. Their decision should be based on an objective assessment (as per Law 10.4) of the circumstances of the tackle."

So, according to the strict letter of the law, Rolland was perfectly entitled to pull out the red. Whether dogged observance should come before sensible stewardship or the sporting spectacle is another matter.

"It was a travesty for the competition," fumed an incandescent Shaun Edwards. "The team that should be playing in the World Cup final next Sunday won't be."

Warren Gatland was scarcely more restrained. "I just feel hollow," he said. "I feel our destiny was taken away from us in the 17th minute. Having looked at it, we accept Sam's lifted him and it probably warrants a yellow card. But he lets him go - he doesn't drive him into the ground."

Rolland himself can hardly be accused of being inconsistent. In a Heineken Cup match at the start of this year he sent off Toulouse's Florian Fritz for a tackle on Wasps's Tom Varndell that was certainly no worse than Warburton's.

Unfortunately not all officials enforce O'Brien's ruling so enthusiastically. There have been at least three similar tackles in this World Cup that have not led to red cards.

Rolland appeared to consider neither the implications of his decision on the contest nor the extenuating context - young player, huge game, early in the script. Where others may have taken a moment to consult the touch-judges or glance at the giant screens, the Irishman could think only of the rule-book.

Wales should still, remarkably, have won. To land just one kick from seven - including two drop-goal attempts - defies belief, even in such soggy and stressful circumstances. To not work a drop-goal attempt in 26 phases at the death was a baffling waste.

That it is France who will now contest the World Cup final is one of rugby's less logical stories. Coach Marc Lievremont referred afterwards to a "guardian angel" looking after his team; others imagined a whole army of them.

No team has won the World Cup after losing in the pool stages and France went down twice, once in such abject fashion that there seemed to be no return.

As World Cup turnarounds go it surpasses even England's renaissance four years ago.
For most of this tournament France haven't been so much dark horses as a pile of pony.

Saturday's stats underline the larceny. Despite being a man down for three-quarters of the game, Wales enjoyed 59% of possession and 60% territory. France offered so little attacking threat that Edwards' well-drilled defence had to make less than half as many tackles as Les Bleus.

Of the much-vaunted off-loading game there was almost no sign, just a solitary one from the tackle all night long. Mercurial skills in the backs? 11 handling errors.

You could argue that Lievremont's men played sensible rugby against 14 men - kicking deep, taking no risks, doing just what they had to do and no more. But where twice before they have illuminated World Cups with stunning semi-final wins - 1987 and 1999 - this was grind before glamour, fortune in place of flair.

"We didn't feel at any stage that France offered us any threat on attack," said Gatland. "I think they kicked the ball about 38 times. I just hope they play more rugby in the final."

Under Gatland's shrewd stewardship this Welsh side should have a bright future. The older stagers like Gethin Jenkins, Alun Wyn Jones, Mike Phillips and Adam Jones have looked back to their Lions best, while the young blades will continue to cut a swathe.

Balanced against that must be the sense of lost opportunity. World Cup semi-finals don't come along very often - about every quarter of a century, according to Welsh history. To be so close, with such an exciting team in such fabulous form and against such an eminently beatable opponent, will not happen again easily.

Next spring's Six Nations offers the first opportunity for succour. Until then the wounds are likely to stay raw, those frozen moments replaying over and over again in heads and hearts.