England exposed as France are reborn

No heroic escapades this time, no backs-to-wall brilliance nor ground-out glory, no third World Cup final on the bounce.

After spluttering sporadically for four games, England's Kiwi campaign ended as it probably deserved to: in defeat, to a team that was more dynamic, more clinical and far more composed when it mattered most.

The 19-12 scoreline might give future generations the impression of a close-fought game that England could have won. Those watching know different.

This was supposed to be the usual nerve-jangler, another cross-Channel classic to join the legendary English victories of Parc des Princes 1991, Sydney 2003 and Marseille 2007.

Instead it fell flat long before the end, France's blue army camped around the Eden Park stands celebrating with a deafening, gleeful confidence that England's late two-try rally could never shake. 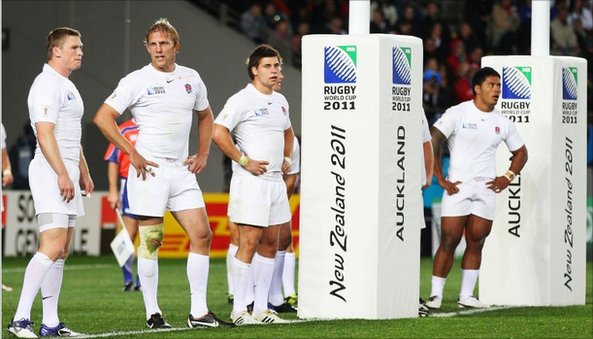 What was most disappointing to the thousands wearing white inside the stadium and the millions more watching from on sofas and under duvets back home was that Martin Johnson's men were so culpable in their own downfall.

In a first half that saw them ship 16 unanswered points that with better kicking could have been 23, they missed tackles, coughed up ball and threw away possession like a side unfamiliar with both each other and the more basic tenets of top-flight rugby.

In the build-up to the game there had been much talk of piling into a supposedly wobbly France in the first 20 minutes, stamping boot on Gallic throat and never taking it off.

Instead, those breakfasting back in Blighty were served the unpalatable sight of a team in reverse, trampled by a blue-shirted assault that had the game by the scruff of the neck with the bacon sandwiches barely digested.

Jonny Wilkinson has so often been the scourge of France in big contests that the sight of him lining up to take a penalty used to silence the Stade de France crowd. Not any more.

This was a miserable way for what will in all probability be his final World Cup match, a re-start going straight into touch, poorly-aimed passes doing the same, trudging off just after the hour to delighted jeers from the same French fans who once feared him so much.

Johnson proclaimed himself happy with the decision to stick with Wilkinson at 10 - "I thought Jonny and Toby (Flood) worked for us" - but there were problems everywhere you looked.

Matt Stevens once again struggled at loose-head, shipping two penalties in quick succession. Louis Deacon gave away another daft one, while a defensive line that had conceded just one try in the tournament so far missed 10 tackles in the first 40 minutes alone.

When France went wide in that key first quarter they found weak shoulders and gaping holes. When English chances came they were tossed away, to the tune of 12 handling errors over a misfiring 80 minutes.

That England's sole threat appeared to come from 20-year-old Manu Tuilagi, in the first big showdown of his international career, said as much for the paucity of other options as his own impressive impact.

Johnson never looks particularly happy. Even when blowing out the candles on his own birthday cake he probably looks daggers at the icing. But the manner of this defeat left him shaking his head with barely-disguised distress.

"These are great opportunities to get somewhere special, and we didn't take it," he said.

"It was a game where we came off and felt it was winnable. The guys were very confident at half-time that they could fight their way back into the game. But the story of our night was that those mistakes killed our momentum.

"It's brutal. But then World Cups are."

Where does this leave Johnson's England? 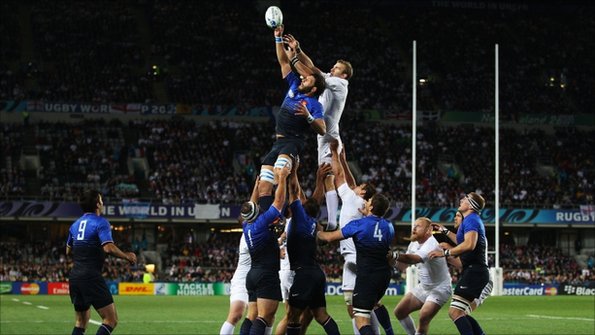 France's team dominated proceedings right from the start against England in their quarter-final encounter. PHOTO: Getty

A year ago they were taking apart Australia with one of the best displays anyone at Twickenham could remember. Four games into their Six Nations campaign they were unbeaten and on course for a possible Grand Slam.

Since then they have not just stagnated but seemingly regressed. The walloping of the Wallabies now seems like a trick of the memory, a performance from a different era.

When England beat Wales in Cardiff last February it made it eight defeats on the bounce for Warren Gatland's men. The two sides appeared to be heading on different trajectories. But it is Wales who are heading towards the heavens when it matters most, and England who have slipped away.

"The performances have been fine," Johnson insisted stubbornly. " We got into the quarter-finals without losing a game. We created more chances to score than France did, but they took theirs and they took them early."

Did Johnson select the right team and ask them to play the right way? He thinks so. "There's not one thing we'd change - there's nothing glaring where you think, wow, I wish we did that."

Conservative and controlling can work. It did for Johnson as a player. But it requires discipline, and strong minds, and an ability to perform under pressure.

If the horse bolts, it's no good having a solid stable door left behind it. Johnson's insistence on a forwards-led gameplan meant that, once France had such a big lead, they were going to be very hard to catch.

When England needed to find some magic to find their way back in, they had just two backs on the replacement bench. One was a scrum-half, the other a battering-ram rather than conjuror.

"I believe this team's best days are ahead of it," said Johnson. "A lot of them are at their first World Cup, and will be better for the experience."

Of his own future - and regardless of his stirring deeds as skipper, it will now become an issue - he was guarded. "Now's not the time. We'll see. We'll give it a few days and see how we go."

France deserve great credit for their own unlikely renaissance. A week ago they were being thumped by Tonga and looked shot. On Sunday they will wake up with a World Cup semi-final to look forward to.

For England there will only be a long flight home and the horrible feeling that their World Cup will be remembered as much for the tabloid headlines that haunted them as anything they produced on the pitch.

If you win, all the other stuff gets forgotten. If you don't, it will get thrown at you again and
again.

Did a night out in Queenstown and a borrowed walkie-talkie really contribute anything to their defeat on Saturday night?

No. There was a far more basic sporting truth at work, hard though it may be to confront: they simply weren't good enough to go any further.