Charles van Commenee's talk of a "golden generation" to match that of Seb Coe, Steve Cram and Daley Thompson raised expectations that the team could leave the World Championships in Daegu with its best medal haul in a generation.

As the team flew back to London on Monday's early afternoon flight from Seoul, had the Dutchman's expectations been fulfilled? With less than 12 months to go until the London Olympics, just how good a display was this from the British team?

We'll dig deep in this analysis but first the simple stuff.

The final-day gold from Mo Farah and silver from Phillips Idowu meant there were seven medals nestled in the squad's hand luggage, in line with the "seven or eight" the straight-talking Van Commenee had set as his target.

It's a clear improvement on recent history: one medal more than was won in Berlin two years ago, comfortably surpassing the five of 2007, three from 2005 and 2003, and two of 2001.

Berlin represented Britain's best medal haul since 1999 and left them eighth in the final medal table. Here in Korea, once again with two golds, they moved up to sixth.

When you factor in the three remarkable performances that pushed three British athletes down into silver - Ibrahim Jeilan's sub-53 second last lap to defeat Farah in the 10,000m, Tatyana Chernova's sequence of personal bests and huge overall PB to dethrone Jess Ennis in the heptathlon, Christian Taylor's unprecedented 17.96m to deny Idowu triple jump gold - the picture could have looked even prettier.

Then again, it rather depends on the perspective you choose to take. 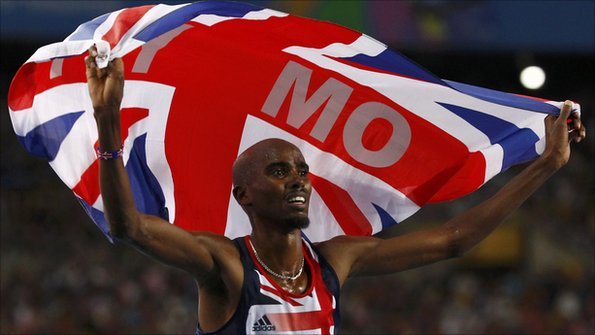 Mo Farah flew the flag for GB in the 5000m final and brought home the gold medal. Photo: Reuters

Athletics statisticians use a simple points system to analyse a team's performance at these big global championships. One point is awarded to an athlete who finishes eighth in their final, two for seventh and three for sixth, all the way up to eight for a first place.

On that basis, Britain scored a total of 34 points in Helsinki six years ago.

The Daegu total? 60. Of 36 individual finals across both men's and women's competition, there were British representatives in just 10.

In men's track events, Britain had no representative in the final of any event from 100m up to 1500m. Had it not been for the hurdlers - Dai Greene's gold medal in the 400m and a bronze for Andy Turner in the 110m - and Mo Farah, the absenteeism would have become embarrassing.

It was as bad on the women's side. There were no British finalists in the 100m, 200m, 400m and 800m, with the latter a particular disappointment.

Hannah England in the 1500m, Helen Clitheroe in the 5,000m and recently naturalised Tiffany Porter were the only British women to make any track final.

"Of that group of athletes that should be close to the medals," admitted Van Commenee, "a good number have underperformed."

In Berlin two summers ago, 11 of Van Commenee's athletes produced personal bests. In Daegu, that number fell through the floor - only Porter and 200m runner Aniyka Onuora delivered PBs when it mattered most.

There are logical reasons for this. Times and distances were down across the board, the windy conditions at the Daegu National Stadium meaning that only three championship records were recorded across all events and only one world record - the Jamaican men's 4x100m blistering relay display in the very last event of the nine days. 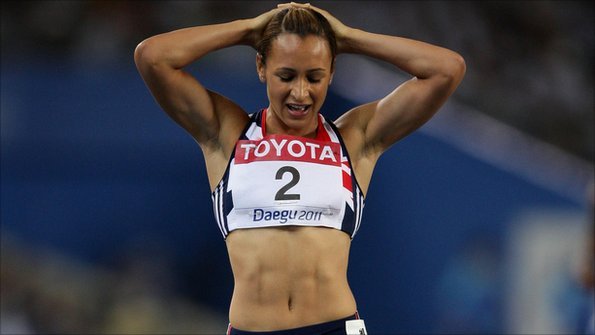 Equally, Van Commenee knows that he will return to his desk at Lee Valley high-performance centre with something of a headache and limited time to cure it. In public, he remains bullish. In private, he may not be quite so chipper.

"When we hit the target, I'm very happy," he told BBC Radio 5 live. "There are disappointments but if two and a half years ago I could predict we would have seven medals I would have been very happy with that.

"I have to be alert but I'm always alert. I go home as a satisfied head coach. I know work has to be done but we knew that. We knew this is not the Olympic Games. We need 11 months and we'll use them."

What of the championships as a whole? This was a Worlds when old champions were deposed, bright new talents installed.

In their place, young stars like David Rudisha, Kirani James and Sally Pearson took their first global titles. Pearson produced the single most impressive performance of the event with her wonderful 100m hurdles gold, Rudisha possibly the most dominant.

Purists allowed themselves a little cheer as those athletes returning from drug bans - Justin Gatlin, Leshawn Merritt - failed to win back world titles in their individual disciplines.

Performances in general indicated that the battle against doping may be taking a decisive turn for the better.

For friendliness and efficiency, Daegu rated highly. For attendances and atmosphere, it was rather more disappointing.

Organisers insisted to the end that an average of 90% of tickets were sold per day but that was to ignore the enormous swathes of seats covered with tarpaulins and the evidence of our own eyes.

If punters did turn up, often they were local school children bussed in en masse. By the time the big finals came round at the end of the evening sessions, many of those who had turned up had already made their way home.

It was a question many of us asked on arrival. A truly satisfactory answer was never quite found. At the centre of it all stood the greatest athlete of his era, Usain Bolt. When he ran, he was once again remarkable. When he didn't, it was almost more extraordinary.