Ohuruogu visits the house of pain

"The 400 metres is one of the beautiful events," says Christine Ohuruogu. "It's not necessarily the strongest person or the fastest person who wins, but the athlete who can work through the pressure."

Her reward, with unavoidable irony, was more of the same. Being Britain's most successful current athlete going into London 2012 is one thing, but having her last two seasons wrecked by injury is quite another. At the age of 26, having lost the World title to Richards-Ross and Commonwealth crown to Amantle Montsho and with her personal best dating back to 2007, she faces an even bigger challenge: can she get the magic back?

"You jump on the conveyor belt and you know you're going to fall off at some point," Ohuruogu admits. "You just hope it's not too soon.

"I watched [last summer's] European Championships on TV from my house. It was very, very difficult, because I really wanted to go and give myself a good chance of medalling. I watched the final thinking, how would I have managed if I were there?" 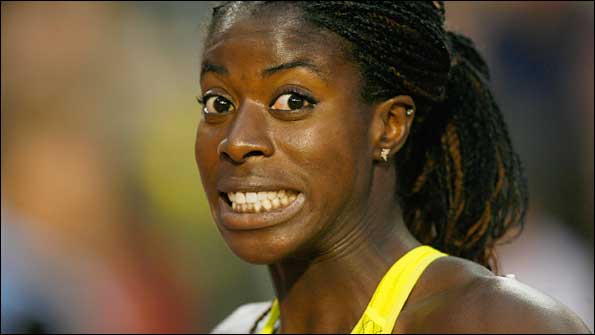 Ohuruogu is delighted to be back fit again

The Briton has gone looking for answers in some unusual places. This winter, she left the comforts of Lee Valley's high-tech Performance Centre for Jamaica, where she embarked on a back-to-basics regime under the gimlet eye of Glen Mills, Usain Bolt's lauded coach. Returning to her native Newham for only a few weeks, she then flew to Los Angeles and a brutal training camp in Irvine. Pain has followed her every step of the way.

"You cannot escape the fact that the training is going to hurt," she says. "And now it's getting faster - and faster means pain.

"Everything is just a blur - just survive the day and get home. Every day is hard. Oh my gosh! You try to fool yourself before a really hard session, find ways round it, but nothing really works. Even if you chat to the other girls, you know you're only hiding from it. You just have to suck it up.

"When we walk to the start line for whatever session it is, no-one talks. You walk as slowly as possible. No-one says a word, no-one laughs. It's like a walk to the gallows."

It is a strange way for us mere dilettantes and dabblers to think about sport - the fun and enjoyment replaced by a lactic burn and sick feeling in the stomach. With all those gold medals at home, what makes Ohuruogu do this to herself?

"As much as it hurts - and at times it's been so painful - I think to myself, I'd rather have made the choice to be here than not have had that choice," she says.

"I know it sounds dumb, but I'd rather be doing the work than sitting around wishing I could join in and not being able to. That's what keeps me going. However bad it feels, it could be worse. I could be injured.

"And that pain is good because it means that when you race it doesn't feel so bad. Every time I feel pain I think, right, that's a bit more resistance I've added on to my muscles."

At home in London, Ohuruogu has traditionally trained by herself, guided by long-term coach Lloyd Cowan. In Jamaica, she was one of many, just another athlete in the Racers' Track Club group that includes Bolt, Daniel Bailey, Yohan Blake and half of the Jamaican women's 400m relay squad.

Across the road, under the banner of the MVP Club, other sprint luminaries like Asafa Powell, Shelly-Ann Fraser, Brigitte Foster-Hylton and Sherika Williams were hard at work.

"When I went to Jamaica, it was the first serious bit of training I'd done for a long time, because of the injuries. I'd only been running for three or four weeks. So I was way behind.

"These guys had been training since October, so they were way ahead of me. Mentally it was very hard, because it's not what I'm used to. I'm not used to having people so far ahead of me. But it has to be done."

There was no talk of Olympic gold medals, no deference to past glories.

"I think the Beijing thing has gone. Let's move on. You can't keep carrying that sack around with you. I want to keep my head down and keep working.

"Usain works really hard. He's not someone who just turns up and does something. I've seen him flat out on the floor. You have to just leave him there. He'll be on his back - leave him alone, don't touch him.

"It was just so humbling to be part of it. I was just one of the many trying to improve."

The lessons stretched to more than mere physical education. While Ohuruogu's body took the brunt, her character was also stretched.

"The Jamaicans are very chilled, but they work incredibly hard," says Ohuruogu. "We think we have to be very serious to get a job done but they showed me something different. It's something that's in their blood. You either do something or you don't, you don't cry about it. 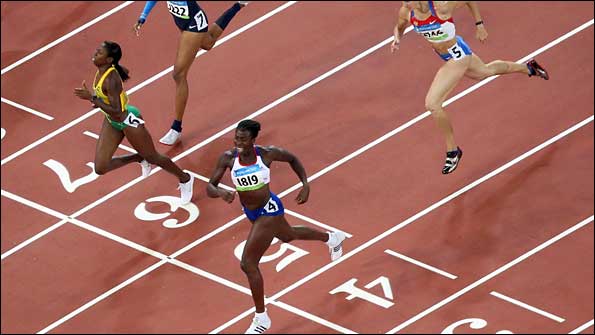 "It was great for me to watch that. My injuries tend to come in the summer, when you might be trying to do too much and probably very, very tense. That's a problem for me. It's very mentally stressing to race.

"Sometimes you need a break from that, from worrying about times. I accepted that my injuries had happened and I think I got the break that I needed.

The quadriceps tear that ruled Ohuruogu out of the 2010 Europeans and Commonwealths also delayed her winter work. Even now, she is still three or four weeks behind in her training compared to the same time a year ago.

So, what might we expect from her this summer? Could she finish on the podium at the Worlds, let alone recapture her world title? Can she once again intimidate Richards-Ross, Debbie Dunn and all the other girls who have moved past her in the pecking order over the past two years.

"Training doesn't change - there's no secret formula," says Ohuruogu. "But I'm beginning to understand that every year is different and the most important thing is getting strong. The stronger you are, the less likely you are to break down. The less time you spend breaking down, the more time you spend racing.

"And 400m is a hard slog on the body. It's being able to run at speed - and that does a lot of damage to your system."

In a low-key season opener last week, Ohuruogu clocked 53 seconds dead. "I was a bit bummed with that. Last season, I ran 52.3. But it was a good run. It looked nice and easy."

She believes there is more in the tank. "You have to bear in mind I'm not where I would be usually. My body is one year older, there's been one more year of battering, but I'm fit and healthy.

"No amount of training you do can ever replicate running a 400m. It can put you through the amount of pain you might feel. But actually running it? No.

"But the fitter you get, the more confident you feel. You can really go out and try to strike.

"And confidence is a big, big thing."