By stumps on day three of this final Test, England had reached 488-7, a lead of 208 over an Australian side that looks to be on its knees. Teams have come back from bigger deficits. This one won't.

As sporting transformations go, Cook's will take some beating. Back in August the only cricketing Don being mentioned in the same breath as Cook was Topley, but his performances during these Ashes have been undeniably Bradmanesque.

If that sounds too lofty a comparison, have a look at the numbers. In seven innings he has scored 766 runs, batting for 36 hours and 11 minutes. There have been two centuries and one double-century.

Only one Englishman in history has ever scored more runs in a Test series, and Wally Hammond not only had two more knocks in 1928/9 but was also playing in timeless Tests. Should conjecture be your thing, why not speculate how many more runs Cook could have stuck on had the declaration in Brisbane not halted him on a mere 235?

How has Cook turned his form around so completely? What's the difference between the hesitant, troubled batsman of last summer and the unstoppable run-machine of this Ashes series?

"The first thing is that it was a swinging summer last year," says Simon Hughes, Test Match Special analyst.

"The Duke ball they were using in the series against Bangladesh and Pakistan really moved around. The second thing is that Pakistan had two absolutely brilliant purveyors with it, Mohammad Asif and Mohammad Aamir. Asif in particular is an absolute master at making the ball curve. He had all the England batsmen playing and missing and unsure what to play and what to leave.

"There were cloudy conditions, slightly damp pitches, and the set of balls they used went round corners. If you play in those conditions, you lose faith in your ability, and you start to doubt your technique. Your footwork becomes stuttering, and you think about everything you're doing rather than just thinking about the ball.

"When Cook was batting last summer, he spent half his time looking at his bat in his back-lift to see if it was straight. His front foot was planting too early, he had a double back-lift and he was getting too far over to the off side."

Cook's mentor Graham Gooch had first started changing his technique after the last Ashes in 2009. Gooch, now England's batting coach and a man who knows what it takes to build long innings, had spotted those flaws beginning to emerge.

"Last summer Cook's technique was going through that transformation," explains Hughes. "Gooch wanted to re-jig that back-lift and simplify his trigger movements, but it was taking a bit of time for those changes to take effect.

"Cook then got that important century at The Oval at the tail-end of last summer. There you could see that his footwork was very decisive. Instead of being tentative, he was striding out to the ball trying to hit it, rather than just survive. And as soon as you become more positive, you get in better positions to play your shots because you're committing yourself to the shot. 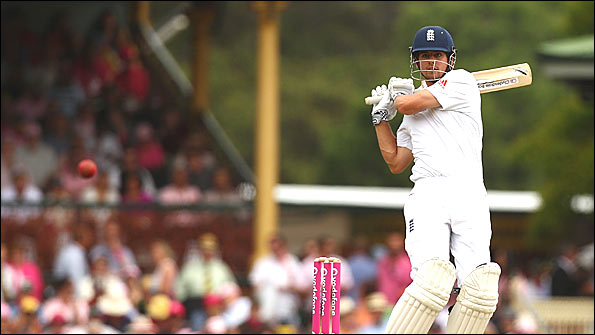 Get thee to a boundary: Cook has kept up his fine run of form in Sydney. Picture: Getty Images.

"That was an important hurdle. Coming out here with the confidence of knowing that his method was working, he has simplified it. He's no longer looking at his bat in his backlift, he's watching the ball, and he's been helped by some very flat pitches and some very ordinary bowlers."

It is Cook's mental strength, almost as much as his improved technical prowess, which has been so outstanding in this series.

Where others have faltered under the weight of match situation or expectation, Cook just keeps on sailing, neither accelerating nor decelerating, compiling runs while appearing entirely unconcerned with the score on the board.

"Gooch has had such a big influence on him," believes Hughes. "He says that Cook always had the aptitude to stay in for a long time. There was his double century for Essex against the touring Australians in 2005, and then in his first Test, in Nagpur in 2006, he flew in from the 'A' tour in the West Indies to replace Marcus Trescothick, only had a few days to acclimatise, but scored 60 and 100.

"He batted pretty well here four years ago, although his numbers weren't great. He got a century in Perth, and he was coming up against much better bowlers. And he also has the advantage of being a left-hander; this Australian team does not possess a good spinner to spin the ball out of the rough outside his off-stump, and the angle of delivery from the right-arm bowlers he is facing makes it harder for him to be out.

"But his greatest strengths, which are keeping his concentration and making sure his shots are simple and methodical, have come to the fore. He's very single-minded in just scoring his runs in certain places and not worrying about how it looks. He sticks to the old philosophy that it's how many that matters, not how it looks."

The Michael Beer no-ball that denied him Cook's wicket on Tuesday afternoon, when he had made just 46, had felt pivotal at the time. But how Cook made the debutant pay.

On 99 Beer thought he had him again, only for replays to show that Cook's clip off his pads had bounced in front of Phillip Hughes at short leg. As chances go, that was pretty much it.

Should Hughes have appealed? Probably not. On Sky's television coverage, Sir Ian Botham used the 'c' word. If he was right, it was no more cheating than what Ian Bell did a few hours later, when he asked for a referral having been given out caught behind for 67.

Most of us sensed he had hit it. He waited at least five seconds before signalling for the review, and throughout the process had the slightly guilty look of a boy caught with his hand in the biscuit tin.

Hotspot failed to show a nick. It sometimes does. Because of that, umpire Aleem Dar had to reverse his decision.

Snickometer later indicated that there had indeed been a sound as ball passed bat. That tool is far from failsafe either, which is why it cannot be used by the television umpire. But the incident left a sour taste in some spectators' mouths.

Should it diminish the achievement of Bell's first Test century against the old enemy? After failing to reach three figures in his 30 previous Ashes innings, he batted beautifully throughout, as classically true as any batsman in world cricket today in compiling his 115. His supporters can also claim that he may genuinely have not been certain that he hit the ball. Not all Australians in the ground would agree.

For a man maligned as the Sherminator four years ago, it was sweet revenge. Shane Warne has changed his tune now, preferring to laud him as the Terminator, and his partnerships with first Cook (154) and then Matt Prior (127) secured England's grip on a match that until then had been in the balance.

Wednesday at the SCG was Jane McGrath day, the ground transformed by splashes of bright colour in honour of the breast cancer charity set up by Glenn McGrath in memory of his late wife.

The place looked a picture. But no-one looked as pretty in pink as Alastair Cook.