The man who made Mr Cricket

Mike Hussey, Mr Cricket, The Huss. In a dismal Ashes summer for the home side so far, he has been almost the sole Australian success story. Here in Perth, at his home ground of the Waca, he is primed to lead the long-awaited Aussie fightback.

Except, had it not been for a very stubborn office manager at the local branch of Australia Post 30 years ago, he might never have picked up a cricket bat, let alone been wearing the Baggy Green.

"There was a very competitive annual cricket match that took place at the Post, where I worked, between the planning department and the building department," recalls Ted Hussey, father to the nation's best current batsman.

"I told them I didn't play cricket but they then told me either I'd play or I'd get posted to Wyndham, 3,000 miles to the north, the following Monday. So I had to play."

Ted was a talented young sprinter and athlete but had never bowled a cricket ball in his life. So he went out into the back yard of his house, shoved a lump of wood in the hands of his three-year-old son and started flipping bits of gravel at the wall behind him.

"They were lumps of blue metal that they make roads from over here," he says. "I just wanted to practice throwing these rocks. Then I noticed that Michael was middling them all, every time, with the lump of wood in his hand."

The match did not go well for Ted. He was out first ball, given a token dog's life and then dismissed second ball as well.

"I got in my car and went home, telling myself I'd never ever have anything to do with this stupid game again. I drove up the driveway and Mike is standing there, holding the bit of wood. As I get out of the car, he comes over and says, 'Will you play cricket with me, Dad?' We never looked back."

I am sitting with Ted, a white-haired but immensely chipper gentleman, in the Lillee and Marsh Stand at the Waca. Intrigued by what has made his son the cricketer and man he is, I had dug out a number for him on arriving in Perth and called more in hope than expectation. Two days later, I am enjoying a quintessential afternoon of Australian affability and warmth.

Forty metres away, the groundstaff are putting the final touches to the Test wicket. The outfield is lush, the stands are spotless. Mike learned his cricket on a rather different pitch. The Hussey oval was the concrete driveway at the family's home in Mullaloo, 10 or so miles to the north-west, the equipment basic at best.

"His uncle made him a bat out of an old window jamb," recalls Ted. "Then we got a brick and wedged three stumps into holes in it so he could use it on the concrete." 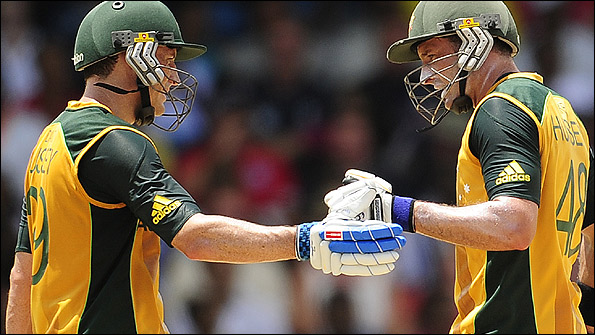 David and Mike Hussey were always trying to outdo one another. Photo: Getty Images

Two years younger than Mike, younger brother David was the next key component. Now aged 33, he has more than 11,000 first-class runs to his name, with a current first-class average of 55 to go with his 40 centuries. Back then, he was merely the junior partner in endless - and vicious - bouts of backyard cricket.

As with garden games many of us played as kids, idiosyncratic rules were invented to take account of the unique playing surface. If the ball went over the fence, you were out. All edges and nicks were assumed caught. The best line to bowl was bang on middle stump, where gaps in the concrete slaps could make the ball jag sharply either way.

"Some people would say the competitive spirit between the two of them was strong. Their mother and I would call it murderous," says Ted.

"Cricket was all very serious between the two of them. Dave would always maintain he was never out, and so Mike would threaten him. I've seen Dave hiding in my car with all the doors locked so he couldn't be got.

"We even had to have an actual punch bag hanging up at the house that they had to take their turns at every day, rather than punching one another out."

Even at that early stage, the characteristics that would define Mike as a Test batsman were evident.

"They were both dedicated to playing cricket well, and doing it properly, but they're two very different boys," Ted told me.

"For Mike, playing a game of cricket was almost a religious experience. It must be done properly. You'll have seen the way he weighs his bat and that sort of thing. Things have to be perfect, in everything he does. Dave being Dave, he was much happier running about and smacking somebody behind the ear, get into a fight, back out and let somebody else finish it off. It was one bit of fun after another. He just wants to beat you."

The two brothers shared a bedroom early on, to leave room for their younger sisters, Kate and Gemma. While David had posters of Australian Rules heroes like Tony Lockett on his wall, Mike's focus was absolute.

For most of his early life, Mike was a right-handed batsman. But even that most fundamental of traits was open to influence from the greats of the game.

"I can remember the moment when he said it. He was only 11 but he said, 'Dad, I'm going to be a left-handed batsman.' It was because he wanted to be like Allan Border. He's learned a lot off Allan over the years - watching him on television, reading about him."

The Hussey boys' sibling rivalry and the inimitable backyard Tests they inspired are reminiscent of the accidental hot-housing enjoyed by other Australian cricket families. A decade before, the four Waugh boys - Steve, Mark, Dean and Danny - were honing their skills in exactly the same fashion in the western Sydney suburb of Panania. Two decades further back, in a coastal suburb of Adelaide, the three feisty Chappell lads - Ian, Greg and Trevor - were going at each other even harder.

"As they got older and they were playing for [local club] Wanneroo, they'd have their mates coming over and playing cricket on the drive as well, all young teenagers, 11 or 12 of them, all out there," remembers Ted.

"By this stage, they're using a tennis ball with electrical tape on one side to make it swing. Quite seriously, there was no way in this world that I was going to face them. They were downright dangerous. 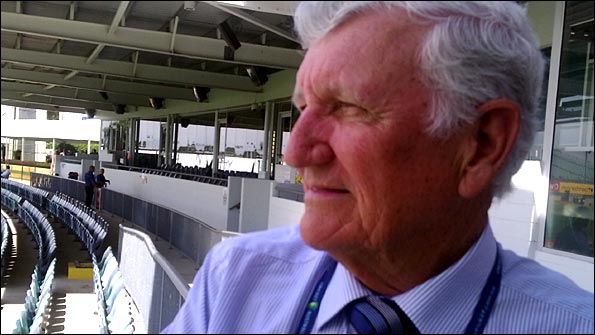 Ted Hussey had no interest in cricket until his boys took up the game.

"Then one Saturday morning, Mike took off for a game at Scarborough for Wanneroo. Then Dave pops his head in and asks me to give him a lift to the game. I wondered why he hadn't got a lift with his brother. Turned out they'd had a fight - a real ding-donger.

"We get to the game. The opposition had virtually a state team playing for them. Wickets go down and the two boys end up batting together. Mike hit a two. Then Dave hit a three. Mike hit a three, so David hit a four. Next time there's one going over the top for six - that's Dave trying to outdo his brother.

Ted, having previously had no interest in cricket, used his knowledge of athletics to work on his sons' footwork and fitness. There were sessions on the sand dunes at Mullaloo beach to supplement the driveway epics, all-day nets at first Whitfords cricket club and then Wanneroo.

While both boys were talented squash players - Mike ranked second in Western Australia as a 12-year-old, David first - and decent Aussie Rules footballers, they both decided to focus solely on cricket from their mid-teens.

By 16, they were playing serious grade cricket against grown men.

Did Ted guess then that both would represent their country? He shakes his head.

"Every father hopes," he says. "But I was too realistic to have an expectation that it would happen. I coached athletics for 25 years to a national level and I know how many slips there are between the cup and the lip.

How does it feel now, when one son is his country's best current batsman and the other the leading run scorer in last season's Sheffield Shield?

"You can't help but be proud and I'd be being false with you if I didn't say that we were," says Ted. "The biggest moment in all that was when they both got a game for Australia against India in the first Twenty20 international played in Australia. To sit in the Melbourne cricket ground, 80,000 people there, and the two of them walk out in Australia gear on - mate, that takes your breath away."

And what of the nicknames? If Mike is Mr Cricket, what does that make Ted - Father Cricket? Mr Cricket Snr? The proud father snorts.

"Mike doesn't like that name very much," he says. "I think he holds the greats of the game in too much esteem to ever consider himself to be one of them. Anyway, it doesn't work like that. Dave would do something for Victoria and it would always be: 'Dave Hussey, brother of Mike...'. So his nickname became B.O.M. In our house, my wife Helen is M.O.M, there's S.O.M. for his sisters. I'm D.O.M - dad of Mike, We're all 'of Mike' now."

You can hear the full interview between Tom and Ted on Test Match Special during the lunch session at the third Test.