As the track and field gets under way here in Delhi, here's an interesting and timely question for you: why have so few British Asians ever represented Britain in athletics?

The numbers - or lack of - are startling: over two million people of Indian, Pakistani and Bangladeshi heritage in the UK, the biggest minority group in the country by far, and yet the number who have worn a British vest can be counted on the fingers of one hand.

It sounds ridiculous, but take a look through the record books. There's marathon runner Richard Nerukar, whose father was Indian; 400m hurdler Gowry Retchakan (born in London, moved to Sri Lanka aged four, came back aged 18 and ran at the 1992 Olympics); and (this will surprise some) there is Sebastian Coe, the Olympic 1500m gold medallist in 1980 and 1984 and now chairman of London 2012. His grandmother was Indian.

And that is almost it. While British athletics draws its stars from a rich and diverse ethnic pool (Christine Ohuruogu and Phillips Idowu with Nigerian heritage, Mo Farah - Somali, Jess Ennis - mixed race) there isn't a single athlete of South Asian descent in the England, Scotland, Wales or Northern Ireland squads in Delhi.

So what is happening, or what is not happening?

Girish Patel is a former pole-vaulter (personal best: 5.21m) and now community stalwart who represented England at the 1976 Commonwealths in Edmonton.

"Cultural and social traditions are key," he says. "Parents' priority for kids, in the Hindu community at least, is academic pride. When there is a sporting focus, traditionally it's been on cricket. In India, it's eat-sleep-drink cricket. That's changing in Britain. Hindi parents now allow their kids to take part in all sports, but football bombards them.

"At the temple in Neasden, we say we have three religions - Hinduism, Man United and Arsenal. Athletics just isn't a high-profile sport that triggers kids' imaginations. There are loads of British Indian cricket clubs and football clubs. Our annual five-a-side tournament has 60 teams but there are no British Indian athletics clubs."

"It's certainly true that many Asian parents want kids to go on to become doctors or engineers, because it's a well-paid profession, and it's viewed well in society," he says. "Asian parents don't prioritise sport to the same extent as education, and when they do they'd often rather their kids become pro cricketers or pro footballers - it's better paid.

"At the same time, the education thing can't be an excuse. There are poor Asian communities in Britain that aren't producing academic kids but they're not producing sportsmen either."

Ahmed thinks other, less palatable forces may be at work.

"In British sport, there are predetermined ideas of what Asians can do. When I was 16, I was told by a football club that I was too skinny and couldn't jump high enough but I went on to be an international high jumper.

"Some people think Asians are genetically predisposed to being skinny but that's nonsense. Bengalis are short, squad, powerful guys. I'm a Pathan and we're strong. I've done training camps in India and some of the guys are big, very athletic. The great power-to-weight ratio was incredible.

"Asian kids are just as coordinated and uncoordinated as white kids. Just because most top athletes are white or black doesn't mean that Asians can't be just as good. I can use the opposite argument - there are lots Asian doctors in Britain, so does that mean everyone else is stupid? No."

Neither are there many young British Asian athletes about to break through. Discus thrower Navdeep Dhaliwal, 23, may yet make it to the highest level but the last that was heard of Monu Miah, who won European junior bronze over 100m in 2003, was that he had converted to Islam and moved to Bangladesh.

"There are so few high-profile role models in athletics for this group," says Nik Trivedi of Sporting Equals, an organisation that tries to promote ethnic diversity and participation in sport. "By now you'd expect to see some representation in sprints or endurance running but participation is low across all events.

"To make a serious attitude change in ethnic communities, you need someone to break through to show kids it's possible. We noticed a real change in the attitude of young Sikh lads when Monty Panesar (pictured below) was in the England cricket team and any sort of success from athletes from India, Pakistan or Bangladesh would make a real difference." 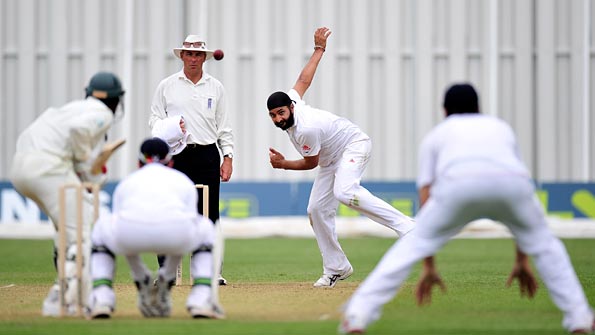 That change might just happen at these Commonwealths. In the absence of Caster Semenya and Jenny Meadows, Kerala's Tintu Luka - coached by the great PT Usha - has a good chance of taking 800m gold in Delhi.

But the host country has a poor record in producing world-class performers down the years. Its sole Commonwealth athletics gold came in 1958, when Milkha Singh - "the Flying Sikh" - won the 400m title.

What of the situation on the front line? Alan Keeler, secretary at the Ealing, Southall and Middlesex Athletic Club, fears his club can do little to attract more members from its large South Asian catchment area.

"In terms of its population in our borough, Asians are definitely unrepresented," he says. "When we last looked at our club membership records, we only had two guys with Southall postcodes. It is a problem and as a club we should be trying to address it. But we have real problems finding enough coaches for our existing athletes."

Stephen Wolstenholme is development officer at Bradford Airedale, another club from an area with a large British Asian population.

"It's only in the last six months that we've had the resources to take on any new youngsters, let alone do any talent identification in the local community," he says.

Over the summer he held athletics testing days in three local schools. The result? A small but noticeable increase in the number of British Muslim youngsters coming to club training nights. Among them are 10-year-old Janaas Khan and his 11-year-old sister Aqeela.

"They absolutely love going down the club," says their mother, Mel. "They do everything - sprinting, long jump, shot put - but they wouldn't be doing it without the club's work.

"It's not the only sport they're into - my son loves football - but hopefully they'll both stick with it in the long term. There aren't many sports facilities for kids round here, so this has been a great way to start. They'll both be watching the Commonwealths athletics on the telly. They love watching the relays."

It's quite possible that there won't be a single athlete with South Asian heritage in the GB athletics team at the London Olympics. So what can be done to reverse the pattern?

"Clubs shouldn't specifically target Asian kids - they need to target all kids," says Fuzz Ahmed. "When I was a kid there were 500 people at my local club; now there are about 100. We need to have more people into athletics, and then you'll have more Asians. And the more kids will bring their Asian mates.

"It's a 'top down, bottom up' thing," Nik Trivedi argues. "Governing bodies need to be more savvy, and work needs to be done in the South Asian community to make it more engaged with athletics.

"For example, if you're targeting an area with high numbers of Bangladeshis, you need to take account that lots of people will work in the catering and hospitality sectors, and think about the timing of sports events you organise. It's a long term game. Until we get local advocates who are pushing this, it's going to be very hard."

Chris Jones, head of marketing and strategy at England Athletics, has been working closely with Sporting Equals. "It's a big challenge that the sport faces," he says. "You can only wonder how much talent there is out there. There could be so many new champions.

"In the past, clubs haven't had the resources to reach out to other communities. They've had to focus on their existing membership. But there's been a lot more investment over the last 18 months.

"We've invested £4.7m over four years from Sport England directly into clubs at a local level, so they can employ community activators, start school holiday schemes, run coaching courses and do coaching in the community with after-school clubs.

"We're also investing £4.5m into coach development and leadership, and hopefully one result will be more qualified coaches in the British Asian community, particularly among women and girls. The more we can reach out to diverse communities with good local leaders and coaches, the better chance we have of attracting more participants.

England Athletics work with schemes like StreetGames and Athletics Activators to get a more informal version of the sport - what Jones calls the "jumper for goalposts" approach - into schools and communities, particularly in deprived areas of London, Leicester and Birmingham, and in the last two years have invested £250,000 in schools-club partnership.

"The fantastic work of Bradford Airedale and the Bradford Athletics Network shows how important that is to solving this issue," says Jones.

The problem, as with many areas at the moment, is in the finances. "We've got a long-term strategy but short-term funding," says Jones. "Seventy-three percent of our funding comes from government, and we're racing a ticking clock there. We're trying to extend the sport to as many communities as possible in a limited time."

Girish Patel, now 56, will be in Delhi to watch the athletics. "It's going to very tough to get more Asian kids into our sport," he says. "But if I can succeed in athletics, anyone can. I was born without any special attributes. But I became fascinated by jumping after watching Lynn Davies and Bob Beamon in the 1968 Olympics, sitting with my dad in front of the telly at home in Forest Gate. That got me hooked."

Maybe, just maybe, these Commonwealth Games in the Indian capital might have a similar effect on another young child or two in the British Asian community.