As celebrations go, the atmosphere was delightful, verging on delirious. Over almost three humid hours in the Jawaharlal Nehru Stadium a Commonwealth Games that at several points over the past two years had looked perilously close to being stillborn finally sprang to kicking, caterwauling life.

There was pomp, there was partying, there was national pride by the bucketful. Flags fluttered. Horns were honked, tablas tapped. A 100m-high tree sprouted into the sky. The infield filled with thousands of sweaty, strangely-suited athletes from Ghana to Guernsey, Scotland to Samoa.

If you wanted to be dazzled dizzy by it all, it was all there for you. Bollywood film directors hundreds of miles to the south-west would have watched this spectacular, looked at their own forthcoming epics and suddenly felt rather overshadowed.

And if you wanted to look past the frenzied fun and fireworks? On the night that was supposed to see giddy celebration replace shoddy preparation, only occasionally did the troubled build-up to these games come creeping through the cracks.

Central to Sunday's ceremony was an enormous aerostat or helium balloon, a vast inflatable backdrop to all the light and noise and supposedly the largest of its kind anywhere in the world. 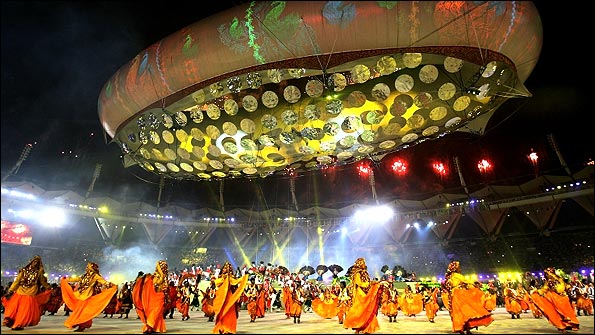 On a night rich with symbolism, both in the tangible shape of the giant Indian flags created on the stadium floor by hundreds of dancers and in the sense that the eyes of much of the world were on the country's capital, the looming presence of the balloon was impossible to ignore.

The hosts are duty-bound to produce something spectacular at an opening ceremony. Failure to shock and awe, to set a few world records off the track as well as on it, gives the impression of a country struggling to pay its way at the top table.

Throughout the festivities the aerostat looked amazing, a mesmerising bauble glittering in the sticky night sky. At the same time, spending almost £10m on a giant balloon in a country when so many try to live on less than a pound a day could only kick up uncomfortable moral questions.

Seated high in the stands it was easy to be swept away with the boisterous nationalism, the sense that all the nightmares of the build-up had been worth it.

In the Bangali Sweet House, a mile or so from upmarket Connaught Place, the mood was similarly upbeat, even as few bothered watching the pictures on the television set in the corner.

"I'm so excited," shopkeeper Girish Aggarwal told a BBC colleague. "It's a special thing, we will prove ourselves to the world. "It's not Delhi, it's the whole of India. Everyone is feeling proud."

Chirayo Acharya agreed with him. "Many people were feeling let down by the negative news but now it's started, let's get on with it. It shows the world that Delhi is a global city and can deliver the Games."

Further afield, though, the mood was noticeably different. Two hours away from the stadium is a rough shanty-town suburb called Bawana, where some of the estimated 140,000 families forcibly evicted to make room for the athletes' village were re-settled.

To say it is a world away from the glitz and glamour of the opening ceremony is something of an understatement. Muhammad Salem lives in a small shack made of wood and plastic sheeting, with an electricity supply that is intermittent at best.

"Life was better before," he said the day before the festivities. "There were hospitals and the roads were better there. There are no jobs here and crime has increased. We're happy the Games are in India, but we haven't benefited at all." 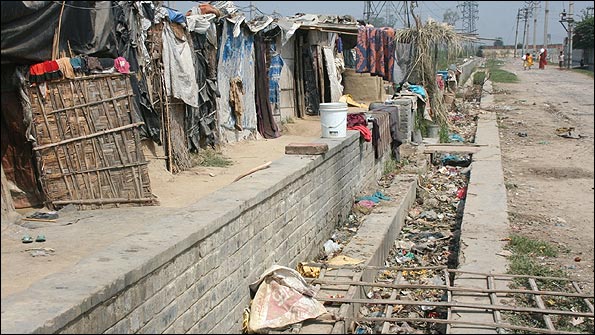 Zaki Ahmed is a doctor at a local clinic. He too was re-settled when the land for the athletes' village was requisitioned; the tiniest portion of that aerostat's cost would make an enormous difference to his life and those of the patients he treats.

'It's hard to get hold of medicines here," he said. "The Government hasn't done any spraying of mosquitoes in the area, and 80% of people here have typhoid, malaria or dengue fever."

For miles around the stadium all day long, streets were empty of the usual hassle and bustle, the only moving presence the thousands of security staff who have been the most visible sign of the Commonwealths in the last two days.

The numbers are vast - 28,378 policemen, 5,000 paramilitaries, 100 anti-sabotage teams, 300 sniffer dogs, 80 radiation meters and 15 bomb disposal squads - and if the organisers cannot be blamed for the wider political problems that require such measures, it can only be an unsettling sight at an event known as the Friendly Games.

Then there's the bums-on-seats issue. It's one thing kicking off with a rousing opening ceremony, quite another making the days that follow just as memorable. So far, only 250,000 of almost 1.7m tickets have been sold. That's a lot of ghostly venues, and a lot of anti-climactic finals.

These games as a whole will cost India somewhere between £3bn and £4bn, depending on which estimate you prefer, a staggering 60 times the original budget.

Should those vast sums, added to the stories of ordinary Delhites like Muhammad and Zaki, detract from the extraordinary atmosphere inside the stadium when Olympic gold medallist Abhinav Bindra led the Indian team out?

The feelings of many Indians seemed to be encapsulated by the reception given to Suresh Kalmadi, head of the organising committee, when he took to the rostrum just after the home team had completed their rapturous lap of the infield.

As his face appeared on the giant screens, whistles and boos rang out around the stadium, reflecting the embarrassment many had felt over the crisis-hit preparations and worldwide headlines of the past fortnight, the same mortification that had led the Tribune newspaper to refer to "a national shame" and the Deccan Chronicle to "a bunch of inept, inefficient and corrupt administrators".

When Kalmadi looked up and stated, "India is ready," that derision turned to roars of approval. When he followed that by reminding those watching that, "We have the second fastest-growing economy in the world," the cheers got even louder.

Big multi-sport events are as much about showcasing the host nation as they are about mere sport. Two summers ago in Beijing we kept hearing that the Olympics were China's coming-out party. These Commonwealths, and the Olympics that the organisers hope might follow in 2020, are meant to serve the same purpose for a similarly booming nation.

"INDIA! INDIA" yelled the thousands around the stadium in unison as Prince Charles rose to read the Queen's address. The message could not have been clearer.

This was a night for forgetting the painful gestation, for postponing any worries about the quality of the sport we might witness over the next 11 days or the importance of the Commonwealth Games in a rapidly-changing 21st century world.

All those issues are still there. Come Monday, Usain Bolt will still be in Jamaica, Jessica Ennis in Sheffield, David Rudisha in Kenya. Muhammad will still be stranded in Bawana.

What's changed is that, along with the comical tales of cobras under athletes' beds and sobering stories of corruption, collapsing bridges and missing stars, there is finally a genuine sense of excitement in the Delhi air.