Achieng goes against the flow

What was the biggest decision you made as a 13-year-old?

I think mine was deciding to spend my life savings on a 6ft x 3ft snooker table from Argos. My sister got her ears pierced, in direct contravention of parental orders. My colleague Ben Dirs borrowed his elder brother's prize Paul Smith suit trousers without permission and got punched on the nose when he returned them ripped at the knee.

Average teenage stunts, and about as far away as is possible to be from the size of the decision made by swimming prodigy Achieng Ajulu-Bushell.

Living in Kenya with her English mother and sisters, surrounded by friends and enjoying a very pleasant lifestyle, she chose to leave all that behind and move thousands of miles to Plymouth, a city where she knew no-one, simply to improve her swimming.

Two years later, another monumental choice. With a berth in the Kenyan team for the Commonwealth Games and Olympics a certainty, Ajulu-Bushell opted to switch her sporting allegiance to Great Britain.

If she were an ordinary swimmer, no-one would probably have noticed. She isn't. At her first British championships earlier this year, she won both the 50m and 100m senior breaststroke titles, and subsequently won selection for the forthcoming European championships in Budapest and Commonwealths in Delhi, putting her firmly in the frame for Team GB at the Olympics in two years' time.

All of which brought accusations firing her way. Was she chasing Lottery money? Did she actually feel British? Had she betrayed Kenya?

Big questions for anyone, let alone someone who has just completed their GCSEs, but Ajulu-Bushell is preternaturally composed.

"I was born in Warrington, and my mum is English," she explains, in an accent that is pure Home Counties, "but we moved to Kenya when I was three. I wanted to continue swimming, and Kenya wouldn't be able to offer me the facilities, the coaching that England and Plymouth College would.

"After that - obviously you can only represent one country, and I had a British passport, I was currently living in England - it all made sense to me. It was sad leaving Kenya, but the decision was a good one. I wouldn't be swimming to the level I am now if I'd still been in Kenya. I've had no regrets."

Ajulu-Bushell's background set her apart from the very start. Her politics professor father Rok Ajulu met her mother Helen when they worked together at Leeds University. Rok had represented South Africa at hockey; Helen, a lecturer in international development, was a decent 400m runner and shot putter.

When the pair split - Ajulu is now married to South Africa's defence minister, Lindiwe Sisulu - Helen found work in Kenya and took her young daughter with her. They would also spend time in Cape Town, but it was east Africa that would become home.

"I started swimming in the Indian Ocean aged six," Achieng remembers. "When I was four I was still scared of the water - I had to go in with my rubber ring and armbands and my mum holding onto me. I started swimming with school, then a club."

Even now, having pledged sporting allegiance to Britain, she is honest enough to admit that Kenya still exerts a powerful draw.

"I've got grandparents, aunties, uncles, all living here in the UK, and I would come back three times a year when I was in Kenya.

So if Kenya is home, are her motives for switching to Britain somewhat mercenary? With the London Olympics just two years away, is she exploiting the nation's need for podium placers?

"I think 2012 is such an opportunity for the country, there'll be such pride in the nation, and it'll inspire so many more people to get involved in the sport - but it didn't play that much of a part in my decision-making. Obviously taking part in a home Olympics will be an amazing experience, but it was so far away at the time that it wasn't really an issue.

"I can only have one sporting nationality, and I needed to do what was best for me, and get the support I needed for my swimming. I'll always have my Kenyan heritage - it'll always be a place I know, a place I can go home to - but I consider myself British and Kenyan.

"The switch was really hard and I did feel really guilty for a while, and it was sad having to leave and change, but there wasn't a bad reaction. My close friends and family were very supportive." 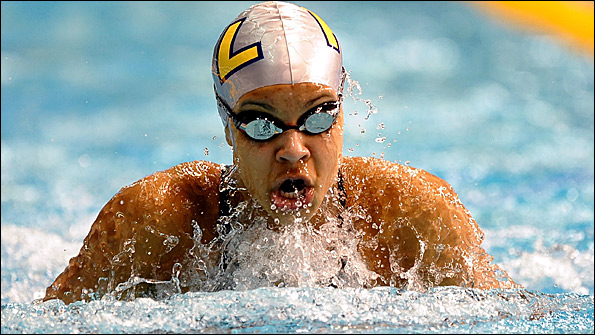 Beyond the bare issue of national identity, there's the issue of colour. In some media coverage, Ajulu-Bushell has been described as the first black swimmer to represent Great Britain. As with most issues she's had to deal with, it's a little more complicated than that.

"My mum's white and my dad's black. I'm mixed race. I haven't really thought about it, but it does crop up a lot."

For most teenagers, struggling with far simpler questions of identity, the spotlight and self-examination would be too much to deal with. But Ajulu-Bushell is not your ordinary teenager.

"She's very strong-minded," says Jon Rudd, head coach of Plymouth's Leander swimming club. "I first met Achieng and her mother in a cafe and I was grilled by her for 45 minutes. She was 12 at the time.

"She very much had in her mind what she was looking for, although I must admit it's the first time I've been interviewed by a 12-year-old."

How does Achieng deal with being away from her family for so long?

"I cope with it well sometimes, not so well at other times. I do miss my mum a lot; as a teenager we fight all the time but when we're apart I do miss her.

"I'm not one of these people who's very dependent on their family. I'm quite independent, and I do things for myself, and my family don't often come to competitions - but in terms of adjusting to a new lifestyle, being away from home has made me more independent. I think I would be a different person if I was at home.

"Sometimes I do just want to go home, leave it all. My phone bill is always massive. I'm always like, 'Mum, I'll call you for five minutes', and then half an hour later...

"I try to get home every holiday and some half-terms, but when I'm aiming for meets it's just not possible to miss that much training."

Ajulu-Bushell is not the only potential London medallist at Plymouth College. In the same year as her is a certain Tom Daley. If there's one thing that helps deflect media attention, it's having the country's 2012 poster-boy alongside you.

"We're known as 'the swimmers'. I think we're quite threatening, to be honest. No, there's a good understanding between the pupils here, of what we do - it's quite broadcasted by the school what we do. There's a bit of mickey-taking, but it's all fine.

"We're really good friends. We have the same tutor in class, and we're in some of the same classes, but we don't talk about swimming or anything to do with the pool. He'll be at the Europeans, so I've told him he has to look after me."

Britain has a rich Olympic heritage in breaststroke, from David Wilkie's 200m gold in Montreal in 1976 and Duncan Goodhew's 100m four years later to Adrian Moorhouse's 100m gold in Seoul in 1988.

That Ajulu-Bushell knows little about them has less to do with national identity and more to do with age. When you were born in 1994, the deeds of that famous trio might as well be ancient history.

For now, their possible successor is focused on the immediate future. "My preparation for the Europeans has gone well so far. I'll just do my best and see what happens - a medal would be amazing, but the experience is what I'm looking forward to most.

"I think it will feel different. It's a new team for me, a new event, a new experience, and I don't know that many people on the team yet. It'll just be a case of trying to take it all in."