The prodigy with barriers to beat

When France's Christophe Lemaitre clocked 9.98 seconds to win the 100m at his national championships a fortnight ago, word zipped around the world several thousand times faster than he had run.

"The first white man under 10 seconds" roared the headlines.

L'Equipe pushed Le Tour to one side and stuck the gangly 20-year-old from Annecy on its front page. Sports fans who hadn't noticed athletics since Usain Bolt last summer were suddenly talking track again.

At the World Championships in Berlin 12 months ago, Lemaitre came and went almost unnoticed, disqualified for a false start in his first round heat. Not so in Barcelona. With the heats of the 100m due to get underway on the first day of competition, he is the name on everyone's lips.

But maybe not quite for the right reason.

First the time. Ten seconds was once the big benchmark for sprinting, just as four minutes was for the mile. Go under 10 and you were world class.

That was then. It's not only Usain, although when the world's best is running 9.58 seconds you're not even in the finish line freeze-frame at 9.98. In Berlin, Tyson Gay ran 9.71 seconds for silver and almost no-one remembers.

More than 70 men have run the 100m in under 10 seconds. Asafa Powell alone has done it more than 60 times. Just as the four-minute mile has been superseded in the half-century since it was first achieved, so the 10-second barrier is no longer the yardstick to use.

What of the cultural significance? In an era of football hegemony, athletics needs all the big stories it can get. If Lemaitre's performance draws some attention to the struggling sport, maybe that's a good thing - when Australia's Matt Shirvington clocked 10.03 secs as a 19-year-old in 1998, he had a clause inserted in his kit contract promising him $1m if he were to knock a further four hundredths off his PB.

Lemaitre himself is not so sure of the significance of his run, saying: "It was my goal to break it of course - one has to run under 10 seconds in order to be part of the world's best. I will be recognised as the first white man to run it, but today is mainly historical for myself." 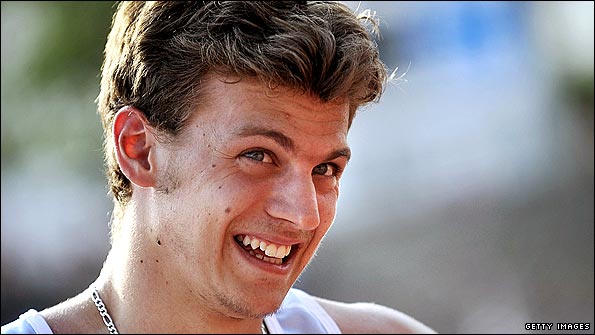 Lemaitre has claimed that his personality is "a little introverted"

He is more concerned about what his time means as a Frenchman (beating Ronald Pognon's former national record of 9.99 sec) and as an athlete than as a Caucasian.

Even as a European he has a long way to go before he can to match Francis Obikwelu's continental record of 9.86 sec.

"Talking about white sprinters, I find this absurd," he said. "I had a good race, I broke the record, but there is not much more to say. I did what I had to do, that's it. This story is too much. I don't like it."

Neither is Lemaitre the first man not of West African descent to go sub-10. Australia's Patrick Johnson, who has an Irish father and Aboriginal mother, ran 9.93 sec in 2003; Frankie Fredericks of Namibia ran under 10 seconds 27 times.

A quick quiz question for you. Who was the previous fastest white man over 100m? If you said Marian Woronin of Poland, hats off to you. If you didn't, you might just have highlighted the insignificance of the record.

Lemaitre's run was special. It was very special. But it has far more to do with his age, back-story and technique than his ethnic background.

He is just 20 years old. At the same age, neither Asafa Powell nor Carl Lewis had run as fast.

He is also a sprinting novice. Football-obsessed as a youngster, the 2003 World Championships in Paris passed him by completely, and he first joined a running club just five years ago. "My knowledge of athletics is poor," he admits.

Despite that, his progression has been remarkable. After a single year of training he had gone under 11 seconds; at the World Juniors two years ago he won the 200m in 20.83 secs. The following year he won 100m gold at the European Juniors and smashed Dwain Chambers' junior record into the bargain.

He is also a long, long way from being the finished article. His body is yet to fully mature - at just 74kg despite standing a shade under 6ft 3in, he does not yet have the upper body strength of a top sprinter - and he only began weight training a year ago.

His technique is at best a work in progress. His start is poor - he is slow from the blocks and comes upright far too quickly - and his arm movement all over the place.

"I still do not really consider myself as a professional athlete," he says. "I am still learning."

His septuagenarian coach Pierre Carraz will work on that. What he does have at his disposal is the natural advantage of a long stride length (even if it is not quite the 41 strides Usain takes over 100m) and blistering speed once he is into his running.

He may yet turn out to be a better sprinter over 200m than 100m. He already has the French record, run the day after breaking the 100m mark, and is the clear favourite to take gold in the longer sprint at the Estadio Olympico.

First up, in the warmth of Tuesday evening, come the heats of the 100m, with the final to follow on Wednesday night.

In Lemaitre's way stands Britain's Dwain Chambers, long in the tooth at his fourth Europeans but running fast again after his doping violations and subsequent adventures in American football and rugby league.

While the French prodigy is marginally quicker this year (by just one hundredth of a second) Chambers came out on top when the two met at the European Team Championships earlier this summer.

"I think he's still going to be riding on the confidence that he has a faster time than me," says Chambers. "But if anything it's just spurred me on to go out and do even better. Experience is the one ace card that I have."

"I consider him the favourite," admits Lemaitre. "I'm the principal outsider."

Chambers, who seems to have found a measure of inner peace after his tumultuous years in the sprinting wilderness, will not seek to intimidate his younger rival.

"I don't want to frighten the kid. I want him to have fun. My three kids have taught me patience, so I have to exercise that.

"The days of running angry are done for me. On that start line I just want to focus, continue smiling and enjoy what I do best. That seems to be working so far."

Chambers' chequered career reads as a cautionary history of recent European sprinting. Lemaitre's might just be the future.