Damned lies and statistics? Not always.

In the sodden aftermath of Ireland's 20-16 win over England, two little nuggets sparkled in the dank February gloom. England had 60% of the possession but were out-scored three tries to one; Ireland made 99 tackles and missed just one.

From those numbers comes the story of the game. One side had a cutting-edge, the other did not. One trundled manfully for little reward; the other made their openings count.

Big games are often decided by small margins, and so it was here. In contrast to the visitors' parsimonious defence, England conceded the key score of the match off first phase possession, a simple take by O'Connell off the top of the line-out, Tomas O'Leary popping the ball up and Tommy Bowe crashing past both Jonny Wilkinson and James Haskell to go under the posts and steal the win away.

It was nothing complicated, nothing Ireland haven't done before, but England let it go. So much possession had they enjoyed that they only had to make 30 tackles all day, but in that instant, the game was gone.

The Irish defence was remorseless. It creaked at times and was often on the wrong side of the law, but it was mighty effective all the same. In Paris two weeks ago the French back row had powered through their opposite numbers, while the backs squeezed through grasping hands like soapy eels. It couldn't have been more different this time.

"Sometimes, for all the systems in the world, you've just got to put guys on the ground," said Paul O'Connell afterwards, with refreshing candour and a wink towards his side's defensive mastermind, Les Kiss. Seldom has a coach been less aptly named. His green-shirted rearguard smashed and bashed all day long. 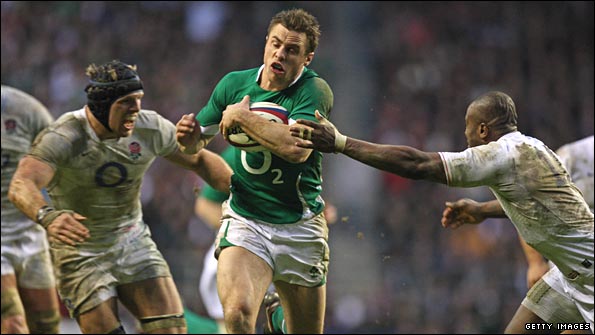 Ireland's Tommy Bowe took his chances against England at Twickenham

Willie John McBride used to say that Ireland played better without the ball. He was proved right on Saturday, and you sensed the old stager would have enjoyed it - the rain, the rumble, and most of all the result.

Ireland's experience, of how to play the conditions and how to win tight games, proved critical. As soon as the rain came hammering down, 20 minutes in, all thoughts of a match as open as the fixture here two years disappeared as quickly as Danny Cipriani's international career.

Against Italy a fortnight ago, England kicked too much. On Saturday they went the other way, loathe though anyone who watches them regularly should be to write such words. They made 140 passes to Ireland's 58, but it mainly took them sideways. When they did kick from hand they did so poorly, with direction awry and the chase lacking.

Ireland were content to keep it tight. They kicked almost two-thirds of their possession, didn't bother with a single off-load out of the tackle and, when they had the territory, converted it into points.

Faultless it wasn't. Errors and infringements almost cost them dear. They shipped an uncharacteristic 14 penalties; normally at international level, that's enough to cost you the game.

Over the past two years, however, the key men in the team have become used to winning. There was no panic when they fell behind late to Jonny Wilkinson's drop-goal, no caving in when England's forwards threatened to drive to the line at the death.

England had their opportunities. Mark Cueto made a half-break but then chose to kick the ball away with Mathew Tait on his outside; after Irish skipper Brian O'Driscoll was stretchered off midway through the second half, they had four minutes of uninterrupted possession in the Irish half but failed to turn it into a single point. Even at the very end they were just three metres short, but short they stayed.

At the scrum they were impressive, at the line-out pretty solid, especially having lost Simon Shaw so early in the piece. At the breakdown they were very much second best. Eight times Ireland forced turnovers; only once did England do the same.

They could argue that the reversed penalty that led to Keith Earls' try should never have been given. Certainly, listening to French touch-judge Christophe Berdos trying to explain himself in English to South African referee Mark Lawrence was of the year's great sporting comedies. Did Danny Care do enough to warrant the decision? Maybe not, but his handbags with O'Leary took the gloss off a decent running, sniping display.

Ireland too had cause for complaint. While England's forwards were convinced that Dan Cole had got the ball down for England's try, television match official Carlo Damasco didn't seem to have sufficient evidence to give it - not from what we saw on Twickenham's giant screens, in any case. Still, you could forgive an Italian for being in generous mood after the earlier result in Rome.

The biggest talking-point for England fans afterwards was Wilkinson. Had his late drop-goal been enough to win the match it may have deflected attention from his other struggles, but instead the bars and stairwells around the ground rang with impassioned debate about his worth.

Was he standing too deep when receiving, or were the forwards to blame for generating slow ball and Care at fault for his slow pass ? Should he have spotted Bowe's match-winning charge and brought the runner down as he did of old, or should Haskell shoulder more of the blame?

What's less open to argument is that his kicking was well below the standards he has set himself. From the kick-off onwards his radar seemed out. From the hand he was too often long or aimless, from the ground wayward in a way that drew gasps from the stands all around. He would have expected to have landed the penalties he missed on 11 and 64 minutes; that he didn't was always going to be significant in a match this tight.

Martin Johnson was stalwart in his defence afterwards. "I thought he played very well. They were difficult conditions out there, and he got us ahead." At the same time he was unable to hide his disappointment. "I didn't think we'd concede another try. That is a tough, tough loss."

Johnson insists his England are going forward, despite the loss and the subsequent scuppering of any Grand Slam hopes. If they are - and any talk of Slams always felt fanciful, anyway - it's a slow, drawn-out process.

Maybe it's foolish to expect a sudden dramatic upturn in style and results. England have been like this for a long time - hard-working, dogged, but only occasionally inspired, their fans perpetually waiting for the great leap forward.

This current crop of players, for all their endeavour and determination, do not compare to the best of previous generations. Try to squeeze a member of the starting XV from Saturday into the World-Cup winning team of 2003 and see how you get on. Any at all? Shaw for Ben Kay at a push, but beyond that, it's hard to make a convincing case.

For some that won't be a problem. Teams capable of winning World Cups, by definition, don't come around very often.

Then again, England have the sort of resources at their disposal that should deliver more. Last year, the RFU announced turnover of £119m and profits of £9m. Each international at Twickenham is worth £10m in sponsorship alone. Despite this, England haven't won any sort of trophy in seven years.

Then there's the spectacle. You could forgive it on Saturday - as Johnson said, "It wasn't a thing of beauty to a lot of people, but it's wet and muddy and you're playing Ireland" - yet the message from this season's Six Nations, almost across the board, seems to be this: never mind the quality, feel the tension.

If it's not always easy on the eye, it's even harder on the nerves. Johnson won't give a hoot about the first, and only a little about the second. For him, there's too much result to worry about first.