The men who witnessed sporting history

Sitting in Berlin's Olympiastadion, its stone columns and surrounding parade grounds almost exactly as they were in 1936, it's impossible not to let the mind drift back 73 years to the Olympics of Jesse Owens, Luz Long and Adolf Hitler.

We've all seen the black-and-white clips of Owens winning his famous four golds, watched Leni Riefenstahl's infamous footage and seen the stills of the Nazi salutes on the Olympic medal rostrum. But what was it like to be there?

There are very few people left alive today who can tell us, but Rudi Thiel and Werner Textor are among their number. 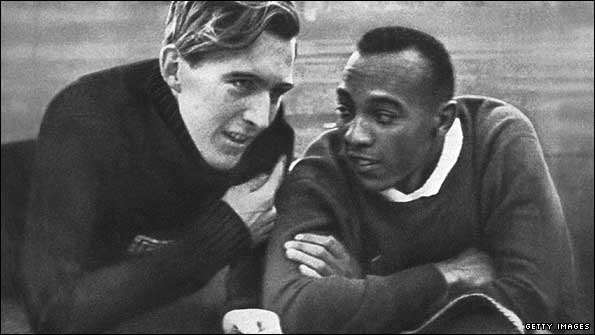 Rudi was just eight in 1936, a sport-obsessed local boy who was taken to the Olympics as a surprise treat by his father.

"I remember the evening of the opening ceremony," he told me this week, on the concourse at the stadium where he had stood so many years before. "We lived a kilometres south of the city, and the city was lit up like a big fireball - there were so many fireworks. I was the oldest of three children, and the fireworks were like war! Everyone was afraid, and we all hid in my bed. That was my first impression."

Werner, now 89 years old and confined to a wheelchair, was a 16-year-old schoolboy when the Games began.

"My job was to be a messenger," he recalled when I visited him in a nursing home in the Schonefeld district of the city. "In those days there were no mobile phones, so the organisers used students from the local schools who were interested in sport to help them out. When there was something that someone needed to know, I was sent to carry the news. We stayed in youth hostels around the stadium.

"The volunteers were selected according to what your sporting background was, and I liked handball, so I worked on that."

Memories of Owens have been everywhere this week. Usain Bolt and Tyson Gay have both paid tribute to their sprinting forefather. The American team have the initials JO on the breast of their team vests, and Owens' grand-daughter Marlene Dortch will present the long jump medals on Saturday evening.

"I remember seeing Jesse, " said Rudi. "We sat by the start of the 200 metres. I remember the roaring of the crowd, and everyone standing up and always cheering." 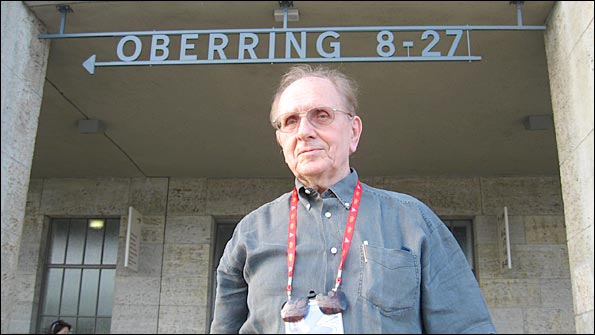 Werner got even closer. "I was there when Jesse Owens did the 100m, because there were no handball matches going on at the time, so I had the chance to be in the stadium. The things that Jesse Owens could do when he was running! At that time none of us had ever experienced those things before. I remember being so impressed."

How did the crowd react to Owens? The Berlin Olympics were designed by the Nazi government to showcase the superiority of the white Aryan race over the rest of the world. Owens' record-breaking victories in the two sprints, long jump and sprint relay were a resounding refutation of those ideals - was he treated as a villain as a result?

"For the people in the Olympiastadion, they did not care about politics - it was about sport," said Werner. "Everyone was cheering for him because of what he was able to do. It wasn't like today, when lots of people have gone fast; the crowd really appreciated what he could do.

"There was no antipathy at all for black people or Jewish people - there was no hatred from the German people. Jesse Owens was the star for the crowd, there's no two ways about it. They loved him."

"I have two very good memories of the atmosphere," agreed Rudi. "I remember how friendly it all was. It was great for a young boy. The Nazis and all that stuff - that wasn't in our minds."

Perhaps the most famous moment in the Games came during the long jump qualification. Owens was up against Carl 'Luz' Long, the German favourite. After two rounds, while Long had set a new Olympic record, Owens had been called for two fouls and looked certain to crash out.

"He missed it twice," recalled Werner. "He just went over the board, and it looked like he must go out. Then I saw Luz Long come over and talk to Owens. Later on I understood what those conversations were about. Luz told Owens some tips - that he was taking off from too close, and that he should move back a little. I remember thinking that they were competitors and rivals but they discussing how to do it better, they were helping each other."

Owens took Long's advice. With his third and final jump, he snatched a place in the final, where he out-jumped Long by 19 centimetres to snatch the gold and set another Olympic record. Long, despite being watched by Hitler himself, was the first to congratulate Owens and walked arm-in-arm to the changing-rooms with him.

Owens told reporters at the time: "It took a lot of courage for him to befriend me in front of Hitler. You can melt down all the medals and cups I have and they wouldn't be a plating on the twenty-four carat friendship that I felt for Luz Long at that moment."

Werner remembers it clearly. "I was aware of the special nature of what I had seen. The moments between Owens and Luz were the most memorable thing I have ever seen in sport. Second? That is when Germany won the handball gold medal in 1936." 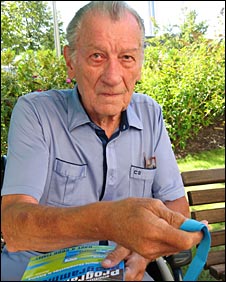 Owens and Long never met again, but they remained firm friends and kept in touch via letter until the outbreak of war. While Owens, snubbed by the authorities back in the US, fell into poverty, Long was conscripted into the German army. Wounded during the Allied invasion of Sicily in 1943, he died three days later in a British military hospital.

Owens too is long gone, killed by lung cancer 29 years ago, but the two men's families have kept the transatlantic bond strong. When Owen's grand-daughter presents the medals on Saturday, she will be joined by Long's grandson Kai. The symbolism of the moment will be lost on nobody.

For Werner and Rudi, eyewitnesses to sporting and cultural history, the memories remain both pin-sharp and poignant.

"I would have loved to get an autograph," sighed Werner, "but things were very strict in Germany at that time. You had to stay where you were positioned, and you weren't allowed to move - so I couldn't ask for his signature or shake his hand. But I would have liked to."

Rudi, inspired by what he saw, went on to work within athletics in West Germany and then become a meet promoter. He counts Carl Lewis as a personal friend, and was in the stadium on Sunday night to watch Usain Bolt creat legend of his own.

"Jesse Owens is so important to my heart and to my work," he told me. "In 1985 I got in contact with the Jesse Owens Foundation, and I met Ruth Owens, Jesse's wife. She came to the athletics meeting here, and we were friends from the first moment until she passed away two years ago.

"My wish is that we make the Olympiastadion in Berlin the Jesse Owens Arena. Everyone in the world associates Berlin with Jesse Owens, so this would make sense.

"For me, sport is such an important thing to bring the world together. There are so many crazy things happening in the world, but in sport the world comes together. Muslims, Christians, Jews - they take the same races, they wish each other the best for competition. Only in sport."