Ponting left laughing as England get the script wrong

After England's farcical performance in the first two days of the fourth Test, there was more than a faint whiff of Dad's Army about Headingley when defeat was sealed on Sunday.

First came the apocalyptic warnings about the rest of the series - "We're doomed - doomed!" Then came the frantic call to arms for the aged and infirm, in this case 39-year-old Mark Ramprakash and the retired Marcus Trescothick. Then, as everyone remembered that it's actually 1-1 rather than 0-4, Andrew Strauss took on the role of Corporal Jones: "Don't panic, Mr Mainwaring!"

All the while, the beaming smile never left Ricky Ponting's face.

Punter has enjoyed himself in Leeds from the moment he arrived. The fact that a full-on English autopsy is now being conducted by the fans and media just makes it even sweeter for him.

"Ah, that's obviously all started, so for us that's terrific," he said with satisfaction in his post-match news conference. 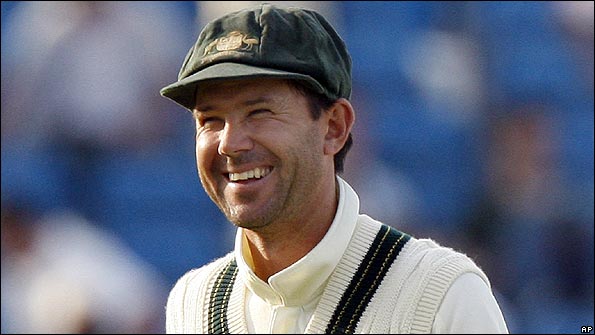 "It'll be difficult for them to bounce back now. Everything is heading in the right direction for us at exactly the right time in the tour."

Strauss, red-cheeked and heavy of heart, did his best to pacify the angry hordes. "I'm never going to make excuses for the way we played on the first morning - the reality is that the first session was awful."

What went wrong? "It's hard to put my finger on it." Has the momentum decisively swung back Australia's way? "I'm yet be convinced it means anything, that word."

Strauss would not be drawn on specifics - Ramprakash included - but intimated that there would not be wholesale changes for the final and deciding Test at The Oval.

Rather than root-and-branch reform, it's more likely that there'll be a little pruning, particularly in the misfiring middle order. England's top five batsmen have together scored only a couple of runs more than the last five in the batting order, and no team can expect to get away with that sort of lopsidedness for long.

A lot of it will come down to the fitness of Andrew Flintoff. Strauss admitted that in retrospect he would have liked an extra batsman at Leeds but had been more concerned in the build-up about taking 20 wickets. With a healthy Flintoff in the team, he can have both.

Flintoff is due to see his specialist on Monday. No-one in the England camp will be drawn about the severity of the knee problem this time around, although Ponting seems to think it's a "two-week" problem.

Strauss will want to know either way a lot sooner than he did here. He refused to blame the chaotic early hours of Friday for the batting carnage that followed, but made it clear that there could be no repeat of the last-gasp fitness test that saw Flintoff ruled out on the morning of the match this time around.

While the battle this summer has been fought in remarkably civil conditions, Sunday also saw the issue of espionage brought into the campaign for the first time.

The "spy", in this case, was Justin Langer, his so-called dossier on the England players' weaknesses the talk of the bars as the home side subsided to their innings defeat.

Captain Strauss was quick to defend his troops from the accusations that they were, variously, prone to cowardice, egotistical and lazy. "It's not of great interest to us," he said. "When you cross that white line, anything that's written on paper doesn't matter."

Ponting simply smiled and stuck the boot in again. "I knew most of it anyway. I'm sure the rest of the boys read every single word."

Ramprakash didn't merit a mention on Langer's list, although it would be interesting to see what observations Langer might make about a man who averages 27 across more than 50 Test matches and whose last appearance on the big stage involved dancing around in a sequinned satin shirt.

That Ramps is being mentioned at all serves only to highlight the paucity of options open to Strauss. At least Captain Mainwaring had the youth of Private Pike to call on.

Sadly for Strauss, county cricket is not producing the sort of battle-hardened recruits who look ready for international ding-dongs.

Jonathan Trott has a fine average this season, but county insiders say that has as much to do with the batting paradise that is the Edgbaston strip as it is anything else. As for the bowlers, the gulf between Steve Harmison's displays for Durham and England suggest that wickets in Division One are a rather cheaper currency than at the highest level.

"It's amazing how quickly things can turn around in this game," said Ponting cheerfully on Sunday night.

Unfortunately for England, he was referring to what has already gone on this summer, not what he expects to happen in two weeks' time.