You know you're in trouble when the sight of heavy rain falling from a grey sky is the most uplifting thing that's happened all day.

How quickly England's pre-series optimism has been washed away. Was it only four days ago that people were talking about the damage their spinners were going to wreak on the Australian batting, how the tourists' unheralded bowling attack was going to struggle in English conditions?

We are only on the first chapter of these Ashes, but the dominant plot is already clear. For England supporters it's also a horribly familiar one: Australia dominating, England in full retreat.

It's difficult to decide what was the most depressing element for the home fans on Saturday.

There's the raw stats, of course - 219 runs behind with eight wickets left, and the forecast for Sunday set fair; Australia running up their fourth highest total ever against England, and their biggest for 63 years; four Australian batsmen scoring centuries in the same innings of an Ashes Test for the first time in history. 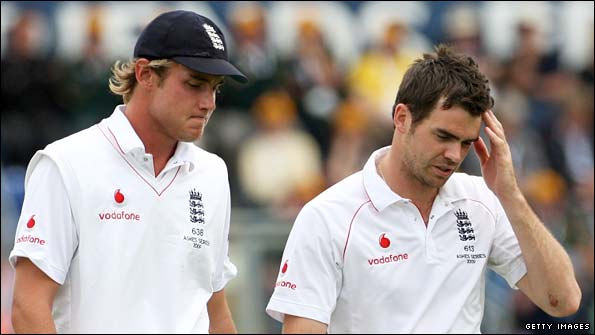 Maybe it was the fact that, after Australia had gone over 26 hours losing just one wicket, England could lose two in less than 10 minutes.

Sometimes it's the small things that hurt the most - the sight of 2005 hero Simon Jones sitting in the grandstand, his only part in proceedings to lead the singing for the Barmy Army.

When Ravi Bopara trudged off just before the rain swept in off Cardiff Bay, a large number of seagulls were seen circling overhead. It took two or three looks to be certain they weren't vultures.

Australia's performance with the bat over the past three days has put England's first innings effort into perspective. 435 seemed like a decent tally at the time. It seemed almost impossible that England could be batting last, unlikely that they could be heading towards defeat going into the final day.

History and experience should have warned us. They have lost to Australia a full six times after posting totals of over 400, most recently and painfully after their 551-6 declared in Adelaide two and a half years ago.

As Ashes openers go, this game feels horribly reminiscent of the match at Headingley a little further back. 20 years ago an Australia under-rated by many observers rattled up 601 in their first innings of the series, England scored 430 in theirs to look safe and then collapsed to 191 all out in rapid time on a pitch free of demons and devil.

England will be hoping desperately that the rest of the series does not follow the lines as 1989. That was the summer that ended with a 4-0 Aussie win, Steve Waugh averaging 126, Mark Taylor compiling 839 runs and England fielding 29 different players.

There are plenty of battles to be fought yet in this series. But it will take a substantial rearguard action from England to prevent them going to Lord's next week 1-0 down, and a whole lot more to undo the damage done by this hugely impressive display from Australia.

Ricky Ponting's men aren't the greatest Australian team to visit these shores. What they have done is gone about this match like a battle-hardened Test team, eschewing unnecessary risk, maximising their opportunities and refusing to give the opposition an inch.

Kevin Pietersen is undoubtedly a more naturally talented batsman than Simon Katich or Marcus North. The fact that both of them scored almost twice as many runs as he did might well give him sleepless nights.

Pietersen alone is not to blame for England's predicament. His performance on Sunday could yet make the difference between defeat or draw. But almost every one of England's players has been outplayed by their opposite number, and when that happens, a game is likely to go only one way.

England's highest partnership of the match so far has been 138. Three of Australia's were bigger - 269 for the second wicket, 200 for the sixth, 143 for the fifth. England's second biggest was 86.

On Saturday it was North and Brad Haddin who did the damage, starting steadily and accelerating away as ragged England bowling and fielding threatened to unravel completely. Both duly completed first Ashes tons. If North was circumspect (his 125 took 242 balls), Haddin was destructive, hammering his 121 off just 151 deliveries and looking as comfortable as anyone could in the shoes of Gilchrist, Healy and Marsh.

Will the Welsh weather intervene to save English hides? According to the Meteorological Office, it's likely to sheet it down all night and all early morning and then clear up miraculously about 11 o'clock.

Then again, rain hasn't affected a result in an Ashes Test since a last-afternoon thunderstorm denied the Aussies in Brisbane almost 11 years ago. For the last twenty years, the team that deserved to win generally has.

In 2005 England lost the first Test but rattled and rolled Australia's batsmen. Doubts were sown in the minds of Katich, Clarke and the rest, techniques tested.

Not this time. Even if Andrew Strauss's men wriggle off the hook, a very different impression has been created. Five of Australia's seven batsmen filled their boots. The England attack looked as toothless as a kookaburra.

It's hard to find many rays of sunshine in all that.