Session Three of training for my decathlon-in-an-hour, and suddenly we've gone caveman.

This is a welcome move. There are insufficient opportunities for modern urban man to access his inner hairy ancestor, and the prospect of throwing a spear around a field had quickened the pulse all week.

Not that I've got much pedigree in the javelin. There was a brief lesson at school at the age of 12, but that mainly concerned how to carry one to the playing-fields without jabbing the bloke in front or behind you. Beyond that, it comes down to some monkeying around with garden canes in the long hot summer of '91 and the occasional launching of driftwood back into the sea on subsequent beach holidays.

Indeed, javelin once got me into considerable trouble at a Christmas dinner, when guests were taking it in turns to read out the jokes from inside their crackers.

"What do you call a bird that can lift heavy weights?" asked one old boy. I jumped to my feet, misjudging both the mood and the number of mulled wines I'd stuck away. "Fatima Whitbread!" I shouted. There had been a horrified silence before the old boy piped up again, his voice quavering with fury. "No," he had said. "The answer is 'a crane'." 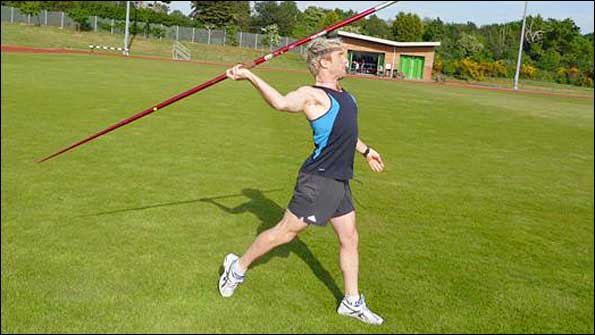 On the plus side, I have thrown a lot of cricket balls in my life. Sadly, it turns out that the technique is almost entirely different.

Coach Ian Grant begins by showing me the two alternative types of grip. The first, which involves wrapping your index finger tightly around the top of the grip, feels unnatural and uncomfortable. The second hooks the javelin into the groove between first and second fingers. Not only does it instantly sit more easily, but it also goes by the pleasing name of 'The Claw'. The decision is an easy one.

The first surprise is how long a javelin is - far in excess of my height. The second is how weird it feels to hold it out in the correct position - tip alongside head, arm not quite locked out, elbow high and wrist in line with forearm.

Your arm wants to drop, your wrist to fall out to the side, your front arm fall across your body rather than staying out in front with fingers pointing forward and thumb towards the ground.

Like the fine coach that he is, Ian keeps things simple. No run-up at first, just a simple stance with front foot perpendicular to the back, front leg strong and straight.

"Paint the ceiling," he says, describing how the throwing hand has to come through long and straight, palm upwards, staying in contact with the javelin for as long as possible.

That first effort flops out to 10 metres. Backleyesque it is not. My action is all arm, and not even a fast one like Jan Zelezny's. I need to snap my hips round, store the power in my chest, back and shoulders.

One of the problems is the disconcerting presence of the spear's glistening point in the corner of my vision. I keep thinking that the slightest change of angle in my wrist will see me ram the javelin through my right eye socket and out of my left ear.

Fatima, I owe you an apology. You were strong. I am weak.

We go again, this time with a gentle three-step approach. I try to leave the arm behind, drag it all the way through and keep the elbow high.

This time something clicks. The javelin pings out to 16m. I pluck it from the turf and fling again, marching down the length of the infield like an angry Athenian.

Some throws flop down tail-first as I inadvertently release them like a leg-break. Others go spinning sideways as the below-the-shoulder cricket throw sneaks back into the action.

When it comes out properly, there's no mistaking the feeling. It's like hitting a sweet golf shot. It feels effortless, the timing rhythmical, the movement unhurried.

My final throw, still off three steps, flies out to 20m. It feels delightful. Admittedly it's not a distance to shout about. It's not even a distance to boast to Kelly Sotherton about, but it's a start, and at least double the distance I ever got a garden cane to fly.

It's also enormous fun. The caveman in me clearly lurks mere millimetres below the surface. "Why don't people throw spears around more often?" I find myself wondering, before slowly coming to the realisation that practising my new skill could be problematic.

I live in a crowded built-up area. I don't own a javelin. I don't even live near a park. Anyone got a cane and a garden I can borrow?

I'll need to throw around 33m on the big day to hit the 400-points-per-event target. By then I'll have had maybe five more training sessions, plus a full-length run-up to factor in.

It's got to be possible. Hasn't it?