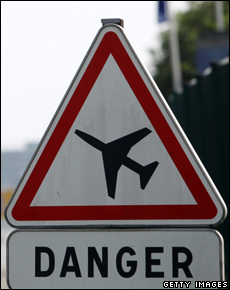 With the chaos caused by the eruption of Iceland's Eyjafjalla volcano entering a fifth day, the question airlines are beginning to ask is when they are going to be allowed back into the skies.

And while millions of passengers remain stranded all around the world by the huge plume of volcanic ash that has spread out across the Atlantic, western Europe and Russia, the costs keep mounting.

British Airways has put its losses at £25 million a day, and according to the International Air Transport Association the overall industry figure could be as high as £130m.

No wonder the airlines are beginning to question the regulatory system that has grounded commercial flights across much of Europe.

The Association of European Airlines, whose 36 members include British Airways and Virgin Atlantic, has called for an "immediate reassessment" of the restrictions after test flights reported no damage from ash.

Over the weekend KLM, Lufthansa and Air France put up more than 30 flights to see if corridors could be found through the ash. A BA flight out of Heathrow, carrying the company's chief executive Willie Walsh, also reported no problems.

The decision not to fly is based on an assessment made by nine Volcanic Ash Advisory Centres around the world and overseen by the UN's International Civil Aviation Organisation in Montreal (a system set up after the incident with a BA flight over Indonesia in 1982). In the UK the VAA Centre is based at the Met Office's London headquarters.

These Centres issue advice to national Governments, which retain sovereignty over their airspace, using a combination of data-gathering test flights and climate modelling of the volcanic ash plume to make an assessment of the risk. But, perhaps surprisingly, it turns out there's no official "parts-per-million" threshold above or below which it is or isn't safe to fly. It's a judgement call made by the VAAC.

Obviously no one wants to fly if there's any risk of an accident, but suspicion is mounting that this bureaucratic system is producing overly cautious advice.

The problem is that - as with any cloud - the ash plume is not uniform. There are patches where the ash is much more dense, and other relatively clear areas. The test flights being operated by the Met Office are decked out with specialist equipment to measure these density fluctuations. Those being operated by the airlines are not.

So the fact that a conventional airliner can take off, fly around a bit, and then come back down unscathed, doesn't mean there aren't potential problems up there.

The Met Office are reporting pockets of ash that do pose a serious risk to planes - pockets those conventional planes would not be able to detect as they flew into them.