Plumbing the depths for new species

Royal Research Ships, it seems, are a little like giant telescopes.

Instead of buying, or hiring one, and sailing away to conduct their experiments in a one-off voyage, scientists "book time" on the research ship that's passing closest to the feature they want to study. The ships themselves plough endlessly this way and that across the high seas.

It's the most efficient way of managing what are admittedly expensive bits of kit - the RRS James Cook cost the Natural Environment Research Council some £36 million in 2006 - but it means they're constantly at sea. When one does finally put in to port, there's something of a mad scramble to load it up with experimental equipment that may not be needed for months or even years. 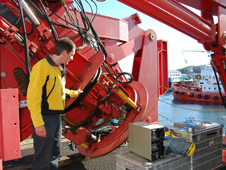 That's what was happening when I caught up with Dr Jon Copley from the National Oceanography Centre in Southampton. I found him packing the last of his scientific gear tackle and trim into a shipping container deep in the hold of the James Cook, which had put in to Falmouth to take on supplies earlier this week.

Drums of chemicals and packing cases, even a fridge-freezer, were all wedged into the container and securely strapped down - it's important that nothing breaks free during a storm.

The next time any of it sees the light of day will be in February, when the James Cook will be over the East Scotia Ridge to the west of the South Sandwich Islands in the southern ocean - a remote part of the chain of underwater volcanoes and hydrothermal vents that snakes its way, like the seam on a tennis ball, for 40,000 miles around the planet.

As a marine biologist, Jon Copley is interested in the complex web of life that has evolved around these hydrothermal vents.

"The mid ocean ridges are where under sea volcanoes are creating new earth's crust. Geologists and physicists are trying to understand these processes, and biologists are studying the lush colonies of life that have grown up around these hot springs," he says.

It may seem incredible, but even after 30 years of exploration we still know more about the surface of Mars or Venus than we do about the crushing, inky, blackness of the ocean floor. According to Dr Tim Shank from the Woods Hole Oceanographic Institution this, rather than space, is the real New Frontier.

"I used to think that the age of discovery was over. That Vasco Da Gama and all these people had found everything there was to find," he says.

"But the reality is we've barely touched exploration on our planet. It is just remarkable what's down there and what we haven't seen yet".

Part of the reason why we haven't seen it yet is the difficulty - and cost - associated with conducting research thousands of miles from dry land, and thousands of feet beneath the waves. 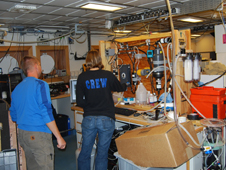 No one country or scientific institution can hope to do it all, and so in an effort to pool resources and avoid unnecessary duplication scientists have formed InterRidge, a kind of international academic talking-shop to plan and co-ordinate efforts to explore the deep oceans.

The UK takes the chair of InterRidge in January, and two of the first projects it will oversee are Jon Copley's expeditions to the Scotia Ridge and the Cayman Islands in the Caribbean.

That's where the fridge-freezer comes in. It's stuffed with frozen chunks of a dismembered whale that washed up dead in Cardiff Bay a few days ago. The carcass will spend a year at 5,500 metres on the deep ocean floor to see what sorts of creatures turn up for a free lunch.

The chances are it'll be something completely new to science...happy hunting.