Do cells think...and is this what it sounds like?

I am a cell, therefore I think. Apologies to Descartes, but then the famous 17th century French philosopher never heard the sound of neurons "chattering" amongst themselves.

Professor Ford compares the sound to seabirds wheeling over a cliff-top colony, and claims it demonstrates a problem solving propensity....intelligent behaviour. The manifestation of mental ability, he argues, is not a feature that emerges from the complexity of higher organisms, it is inherent in each individual cell. 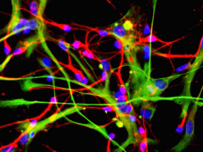 It's a radical new take on intelligence. Scientists are well used to the idea of intelligent behaviour being exhibited by colonies or groups of organisms that appear to be capable of a level of ingenuity that is more than the sum of their parts.

This kind of organisational or 'swarm' intelligence has been of particular interest in robotics, and a great deal of time and effort has been spent on developing computer programmes that enable robots to co-operate on tasks that would be beyond each individual.

But many single-celled organisms are also capable of constructing elaborate homes, repairing themselves, and even hunting for food. When we consider the significance of these observations, professor Ford concludes, we must acknowledge that these cells are taking decisions, adapting to situations, and working out what to do when confronted with a problem.

This, rather than group action, is the basis of intelligence. Cells think - and neurons, it seems, like to chat amongst themselves while they do it.