The end of the world is not nigh 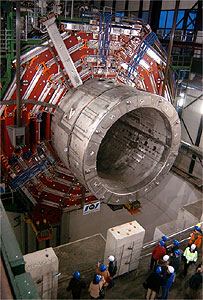 The world is not going to end when scientists switch on the Large Hadron Collider (the giant atom smashing machine buried under the Swiss Alps) on Wednesday. That's the verdict of an exhaustive safety assessment.

Some scientists have voiced fears that switching on the LHC could trigger a black hole that would swallow the planet (and the rest of the solar system for good measure) in a matter of minutes. Led by a German chemist, Otto Rossler, they're using the European Convention on Human Rights to try and block the launch - which is due to be covered live on the Today programme.

The LHC is the biggest and most complex scientific instrument ever built, and at £4.4bn, it's also one of the most expensive experiments in history. It's designed to smash together beams of protons travelling at nearly the speed of light triggering a massive release of energy....so massive that it will recreate the conditions that existed in the universe just a trillionth of a second after the Big Bang.

Physicists hope the results could help solve some of our most fundamental questions about the nature of the material world, reveal the secrets of dark matter, and even point the way to a theory of everything.

Today's report provides the most comprehensive assessment on the safety of the project to date. It shows that the LHC almost certainly will produce microscopic black holes (perhaps at a rate as high as one every second) but that these will be so small and unstable that they vanish as quickly as they form.

The scientists point to the evidence from cosmic rays, which regularly produce much more powerful particle collisions than the LHC as they bombard the earth....and we haven't been swallowed by a black hole yet.

For more information on the LHC go to Radio 4's Big Bang website.