A Quick fix for Global warming? 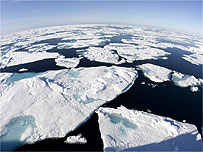 It's the stuff of science fiction, but could mirrors in space or giant atmosphere processing plants actually put the world's climate back on track?

That's the question being addressed by the Royal Society, which has given over an entire edition of the scientific journal Philosophical Transactions A to discussing the pros and cons of geo-engineering - planetary scale interventions to manage the carbon cycle and reduce greenhouse gases to an acceptable level. A sort of technical fix for global warming.

Some of the ideas that come under the heading of geo-engineering seem to have been lifted straight from the pages of a science fiction novel. But if launching millions of tiny mirrors into space to reflect sunlight sounds too far fetched how about using rockets to spray sulphur into the upper atmosphere? That idea was inspired by research on the impact of Mount Pinatubo's eruption in 1991. Sulphur ejected from the volcano spread far and wide over subsequent months leading to a significant, if temporary, cooling of the region's climate.

More mundane - though no less dramatic in terms of their impact - are proposals to increase cloud cover by spraying salt into the atmosphere, or to seed the oceans with iron (triggering plankton blooms that would draw carbon from the water before locking it away on the sea bed as these tiny shell-building creatures died and sank to the bottom).

Until recently these ideas were given short shrift by serious scientists. Policy makers have concentrated on efforts to reduce carbon emissions and on developing renewable energy technologies. But getting people to change their fossil fuel burning habits has proved a hard nut to crack. We simply aren't "going green" fast enough to avoid dangerous climate change, and that's forced geo-engineering up the environmental, and political, agenda.

But before you nip out to burn some guilt-free rubber in the 4x4 there are still some serious problems to overcome.

In the first place, geo-engineering solutions mean fighting pollution with yet more pollution, and all these proposals bring problems in their wake. Then there are the political consequences of one country, or group of countries, taking action than might trigger dramatic consequences in another part of the world. And, of course, there's no way of knowing how effective geo-engineering will be.

If we assume some sort of technical fix is going to get us out of jail free, and carry on burning fossil fuels in the meantime, we could end up with an even bigger problem in the years to come.