I've met them at parties and I've been to their offices and I've always found them intimidatingly cool. At one company I visited, they held their meetings in a caravan that had somehow been installed in the place, a rather more exotic place to gather than the typical BBC glass box. 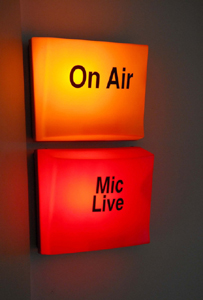 Anyway, that was a group of old-school advertisers, set in the relatively stuffy ways of traditional media. If they were scary, how daunting was it to meet the guys from Rubber Republic, specialists in viral campaigns, which are surely the coolest ads of the lot. (They even have an attention-grabbing vocabulary, describing themselves as a "viral seeding shop" rather than as an advertising agency.)

Matt from Rubber Republic had entered the life of Today as a guest on the programme, who offered to make a video for Today.

Now viral campaigns are special. They are usually funny. But most importantly, in pursuit of their art they are uniquely uncompromising.

You see for most of us sad folk who work in semi-creative jobs, there is a tension between artistic purity and commercial good sense. Every architect for example (except perhaps for Norman Foster) has to concede a little in aesthetics to improve the functionality of their design. The same applies to landscape architects (I know because I live with one) where there's a permanent tension between the number of trees a typical scheme can accommodate and the number of car-parking spaces.

Even the Today programme involves a balance between the worthy-but-heavy items with the worthless-but-entertainingly-light ones.

Such compromise is important in the ordinary profession of advertising. Even though they may occasionally overlook it, most advertisers are really employed to sell things. Which often means, for example, cluttering their magnificent artistry with a prominently
displayed name or message.

But the viral advertisers are different.

They have to make their ads so appealing - so devoid of the hard-sell - that the users seek them out, and so they spread themselves. The wit involved in a video (which often involves a good deal of self-deprecation) has to be elevated above all else. Companies will evidently pay for these campaigns simply hoping for a small piece of their innate coolness to rub off on their brands.

Well, so it is with the Today programme video. Except, we didn't have to pay.

I won't tell you much about the ad (part of our seeding strategy is to build anticipation). But I will say three things about it.

Firstly, we were all amused at the office when we read the script. But then we are us, we are not the intended audience. So that is no guide at all. I'll be interested to read the reviews on YouTube.

Secondly, the video was produced remarkably quickly. I had thought it would take several weeks to conjure something up, but Rubber Republic were in the office with a film crew in tow, within days of any mention of a video being uttered.

Finally, I think a lot of us were mildly surprised at how high the production values were. I thought viral ads were innately amateur. But no, the kind of rough look you see in the video is painstakingly constructed by top industry professionals.

Which of course befits the Today programme itself. We would hardly have wanted our video to be filmed on a mobile phone.

I'm Evan Davis and I'm one of the presenters of the Today programme. This blog is where I'll put down my thoughts once the programme has come off air.

You can stay up to date with Today: Evan Davis via these feeds.