It was not the moment when England actually won the second Test against Australia that will stick longest in the memory.

When Andrew Flintoff - surely bowling as well as any man has at Lord's - picked up the ninth wicket of the Australian innings, he dropped to one knee, and with his arms outstretched held the pose as he faced the spectators in the Mound and Tavern Stands. 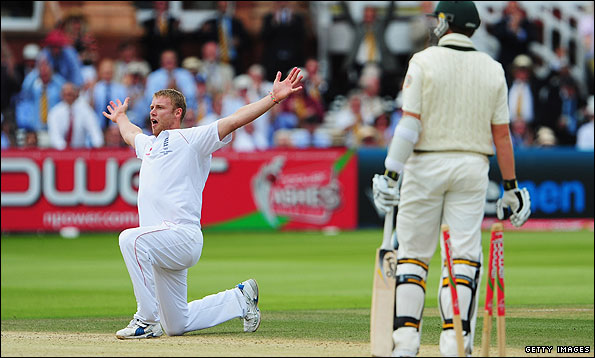 Every day, every single little thing he did had been raucously cheered by spectators inebriated by his brilliance. So it was ironic that he was the one genuflecting to them, his besotted followers.

The fans had come knowing that in the years to come they would be able to tell their grandchildren that they watched Flintoff's last Test at Lord's. The cherry on the trifle, of course, was that their hero was providing the man-of-the-match performance in England's first win against Australia at headquarters since 1934, and only their second since 1896.

There had been criticism of the timing of Flintoff's announcement that he would play no further Test cricket after this current series, Australia's captain Ricky Ponting pointing out that this tour of last hurrahs might turn into a distracting "circus".

But if the Lord's experience is anything to go by, spectators can look forward to seeing performances that are less Coco the Clown and more Maximus Decimus Meridius. How appropriate, then, that Russell Crowe attended a day of this Test.

In his 77th Test, Flintoff had pulled out only the third five-wicket haul of his career. Having already sent down 29 overs previously in the match, he bowled another 60 deliveries early on Monday, plus the odd no-ball, at an average speed of 90mph. Did he bowl a single ball that did not ask serious questions of every batsman who faced him? I doubt it.

But it was not all about Flintoff. Andrew Strauss's big century, James Anderson's four wickets on Friday, the confident batting of Alastair Cook and Matt Prior, and Graeme Swann's 4-87 were all important pieces of an England jigsaw that is coming together nicely.

At lunch on day five in Cardiff, with Australia apparently on course to go 1-0 up in the series, that same puzzle had been upended, in hundreds of pieces, on to the carpet. In 10 days' time, assuming the injury niggles to three or four players can be sorted out, we will see the same 11 players taking on Australia at Edgbaston.

Now, the problem-solving will be in Ricky Ponting's camp. In post-match interviews, the Australian captain offered strong suggestions he would not be keen to either drop the misfiring Mitchell Johnson or shake up the team in any other way.

Strong performances from any one of Brett Lee, Stuart Clark or Shane Watson at Northampton - perhaps even Andrew McDonald - may change that thinking.