Andrew Flintoff's announcement he would be retiring from Test cricket was about as shocking as Cristiano Ronaldo's summer move from Manchester United to Real Madrid in its timing.

At the age of 31, England's talismanic all-rounder has had to admit his injury-ravaged body cannot stand up to the rigours of the five-day game and, if he wanted to continue playing the sport he loved at the highest level, he had to make a harsh decision.

He has opted for the shorter form of the game, one-day internationals and Twenty20 matches in the lucrative Indian Premier League once this Ashes series has finished.

Flintoff believes he could continue playing for England for the next four years and beyond, if his body lets him.

As Lord's was busily preparing for the Ashes Test, putting the finishing touches to advertising hoardings, some ironically featuring Flintoff for a well-known men's deodorant, a hastily-arranged news conference was being set up.

In the end Flintoff was almost half an hour late meeting the throngs of journalists who had packed into the Brian Johnston Film Theatre inside the Lord's Museum.

But the burly Lancastrian looked like a weight had been lifted off his shoulders by announcing the news.

He was in a philosophical mood rather than looking emotional, a complete contrast to former England captain Michael Vaughan, who was extremely tearful when he announced he was quitting the Test arena.

In the 13-minute news conference, kept tight by England and Wales Cricket Board media manager Andrew Walpole, Flintoff spoke about how he had been mulling over the decision for a while and had not just thought suddenly about quitting overnight.

However with his problematic knee, which had been operated on at the start of the year, flaring up again during the drawn first Ashes Test at Cardiff and needing pain-killing injections, Flintoff decided it was time to listen to his body.

"I've been a professional rehabber for two years," he said. "There is relief in announcing it but sadness in acknowledging it."

Flintoff had sought advice from legendary England all-rounder and his childhood hero Sir Ian Botham, Vaughan, Ashley Giles and his physio Dave Roberts. He said the England squad had known about the situation for a few weeks. 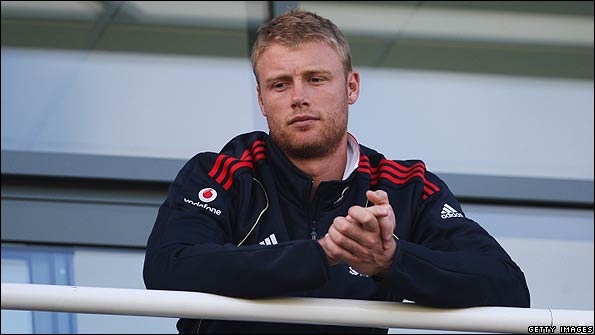 But he is desperate to go out on a high and is aiming to play in the final four Tests against Australia this summer, "I'd do anything to play in those next four," he said although he could not even guarantee if he would be fit enough to start on Thursday.

Flintoff's larger than life character and his heroics during the 2005 Ashes win, in which he won the Man of the Series award for taking a staggering 24 wickets and amassing 402 runs, endeared him to the British public.

Most even saw the funny side when he was "worse for wear" at the subsequent official celebration parade through London.

But his actual Test statistics - 76 Tests so far, 219 wickets and 3708 runs at an average of 31.69 were hardly the most impressive as he aimed to become the best England all-rounder since Botham.

But Flintoff, who can barely remember his stats, is more about blood and guts passion and inspiring his team-mates, and scaring the hell out of the opposition, rather than playing for his average.

Cricket has been in his blood and as a baby his mother Susan used to wheel him around the boundary ropes in his pram while his dad Colin was playing club cricket in Preston.

He flourished in the game despite it not being on the curriculum at his school, Ribbleton Hall High.

His cricket potential was obvious at a young age and he made his debut for St Annes fourth XI at the age of 13 and the first team a year later, becoming the youngest player in the Northern League.

But even as a youngster he struggled with injury and at the age of 16 had to stop bowling for a number of months because of back problems.

He made his Lancashire debut in 1995 at the age 18 and played his first Test for England, against South Africa at Trent Bridge, in 1998.

But injuries started to rear their ugly head on his 6ft 4ins frame again in 1999 when he broke his foot during a Test in Cape Town and his career has been blighted by them ever since, having undergone four ankle operations and a knee operation.

Flintoff said he "can't grumble too much" about his Test career which spanned 11 years after claiming he was "rubbish" when he first starting playing at the highest level - a remark which drew loud laughs from the journalists.

England are certainly going to miss this no nonsense northern lionheart who played like a man possessed in the Test arena.

But he believes if his body holds up, his best cricket is yet to come - what a scary thought for the opposition.