Kevin Pietersen's series-ending Achilles operation may have redressed the balance a little, but it is Australia who go into the third Ashes Test at Edgbaston needing to find a method of landing a counter-punch after going 1-0 down in the series.

Whether that method includes making changes to their line-up will be one of the most fascinating tableaus between now and 30 July, when Ricky Ponting and Andrew Strauss swap their team-sheets at the toss.

Australia, on the other hand, have a problem with a bowling attack that has failed to take 20 wickets in either concluded Test and looked a man light at times (there are four of them to England's five).

Ben Hilfenhaus, Peter Siddle and Nathan Hauritz have all had their moments, but to say spearhead Mitchell Johnson has been disappointing would be generous. 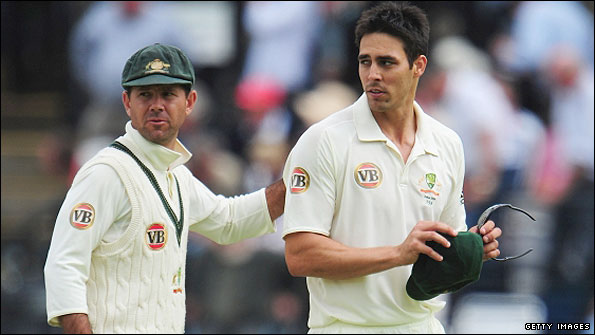 Johnson, scourge of South Africa in Australia's impressive 2-1 series win over there in March, has been so lacking in accuracy there were times - particularly at Lord's - when it was tempting to check whether he was bowling with a blindfold on or not.

The official line doled out from within Cricket Australia is that the team played well in South Africa and Cardiff, that Lord's was an unwelcome blip, and that they will not be rushed into changes for the sake of it now.

One or two commentators take the view that Johnson (16 wickets at 25.00 in South Africa, but eight at 41.37 in this series) must be persevered with, come what may.

And multiple Ashes winner Jason Gillespie told me during a break from his 5 Live duties: "I just think he's trying too hard, simple as. You don't lose your skills overnight, it doesn't happen. He hasn't been bowling his best - he'd be the first to acknowledge that, but put it down purely to a young bloke trying far too hard."

I also caught up with Andy Bichel, the former Australia fast bowler who played in the 2002-03 series.

He said Australia's bowlers collectively felt nervous at Lord's, and that Johnson felt extra pressure: "He's just come into the role of being a leader now and he's got to digest that. He needs a bit if sympathy. If he's bowling badly and still taking wickets he's probably OK."

But perhaps the most pertinent view came from England's James Anderson, who has scored a few runs off the bowler: "I can see he's thinking about his technique and action a lot, and if you're thinking about that in the middle it can have a detrimental effect on the way you bowl."

Australia's options are myriad. If the Edgbaston wicket starts damp, which may be the case given the groundsman's concerns on the issue, they could lose their specialist spinner Nathan Hauritz, and bring in a fourth seamer - perhaps Stuart Clark.
In some senses it seems remarkable that Clark, who was the leading wicket-taker in the 2006-07 Ashes and is still rated fourth in the world in the Test rankings, cannot get into the side at the moment.

However the word is that he has started to look like the 33-year-old bowler he is, has consequently lost a bit of pace, and is not the threat he was two years ago.

Bichel does not quite see it that way: "I did some work with Stuart before he came over here and he was looking really, really good and still has a big future in this Test series.

"We are going to need more than three [seam] bowlers in this Test series. I am enjoying the loyalty to the players who have done it just recently but they are going to need [Clark] at some stage. He's a good bowler, we've seen what he's done. He'll find his way into this series somewhere."

Gillespie says Clark will "definitely come into the reckoning", not least because of the injury cloud hanging over Shane Watson and Brett Lee.

The balance of Australia's squad has led to plenty of anxiety down under. One former Test player, Rodney Hogg, called it "probably the worst-balanced squad in the history of the Ashes".

One alarming characteristic is there is no obvious spare batsman, although Shane Watson - despite holding a Test average of 19.76 - is officially in the squad more for his batting than his bowling.

Having recovered from a thigh injury, Watson will look to have a big game in the tour match starting on Friday in Northampton, and notion has been aired that he could yet replace the struggling Phillip Hughes as the Test opener - however strange that may appear.

By doing that, Australia would beef up their seam-bowling resources - but at what cost to their batting? It might be seriously tough on the number six Marcus North for him to be dropped for Watson, given that North made a century at Cardiff. But it would be a more logical step.

What Australia really need right now is Brett Lee, given how brilliantly he bowled against the Lions. But the side injury that developed during that game and consequently ruled him out of the first two Tests has refused to go away.

It is unlikely that he will bowl at Northampton, which suggests Edgbaston will also come too soon - and there are very real fears he will play no part at all in the Ashes.

No Lee v Pietersen to look forward to in the remaining three Tests? That might be a slight dampener for some, but as this Ashes reaches its fulcrum there are plenty of other mouth-watering duels to look forward to.