What is it about these Ashes Test matches?

As I left the hotel in Cardiff on Sunday morning I joked to some of my colleagues that what the series needed was England's last pair hanging on for a dramatic draw. No straightforward saving of the game I said, because who would remember that?

The last pair scenario certainly didn't look at all possible for most of the day as wickets fell with regularity, but thanks to a heroic innings from Paul Collingwood and the desperate efforts of James Anderson and Monty Panesar England somehow held on to give Cardiff the memorable debut Test match they must have dreamed off.

The mood of the most tense of final days was rather well summed up by this e-mail from TMS listener Andrew Robertson from London.

"I could go out - I would have a better day if I went out but I won't go out - I will stay in and listen to the cricket and by doing so commit myself to a day of stress, false hope and frustration. In addition my girlfriend and I split yesterday and if that's not enough my cat died last week... they owe me, they owe me."

Well at least Andrew now has something to cheer himself up with and we have a Test which sets up the series perfectly. For most of the last five days the spirit of the 2005 Ashes victory seemed a long way away from south Wales - but it was back in bucket loads on Sunday as a capacity crowd created an atmosphere more common at the Millennium stadium down the road.

The game began with a emotive opening ceremony full of glorious Welsh singing while in the Test Match Special box Christopher Martin-Jenkins decided to greet the new venue with the purchase of a new laptop and excitedly arrived with the machine on the first morning. CMJ's travails with technology are well documented - he famously once attempted to make a mobile telephone call with a television remote control - so to be honest we greeted this news with a mixture of anxiety and dread.

Sure enough, he spent much of the opening morning battling with loading software onto his laptop with various degrees of success. CMJ then surprised all of us by announcing he was keen to join the Twitter generation after admiring the following Jonathan Agnew was attracting on the website. Who knows which technological advance he'll be embracing in time for the second Test?

An amazing cake was delivered to the Test Match Special box on Saturday morning. Carefully crafted by TMS listeners Sarah and Guy, it featured amazingly detailed marzipan sculptures of Aggers and Henry Blofeld, including copies of their books and even an Ashes urn. We are exceptionally fortunate to be presented with some amazing cakes over a summer, but this one really was something special. 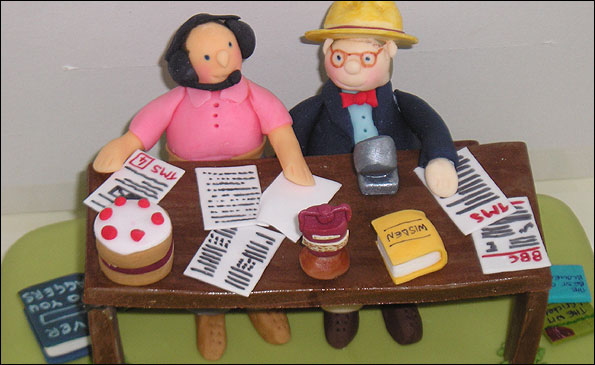 So onto Lord's where the 2005 series started also started in dramatic style four years ago. Describing the action this time around at the home of cricket will be Aggers, Henry, CMJ and Jim Maxwell, with Phil Tufnell among our expert summarisers.

I believe Tuffers is the first TMS summariser to release a single during an Ashes series - and if you are brave enough look out for his Ashes Anthem set to the tune of the Rolf Harris classic Two Little Boys released to raise money for the charity Cricket for Change.

Alongside Phil will be a man who also knows this ground especially well - the former England bowler Angus Fraser who is now of course the managing director at Middlesex - while the Australian viewpoint comes again from former captain Ian Chappell plus the former Australian wicketkeeper Adam Gilchrist will be back for this Test. We hope he'll be popping into the TMS box to offer his thoughts on the game.

Comedian and huge cricket fan David Mitchell is featured in "View from the Boundary" on Saturday. David, of course, stars in "Peep Show" and "That Mitchell and Webb Look" currently on BBC television. He also writes a sports column for the Guardian.

To help celebrate the launch of the Test Match Special Ashes Archive, we are also going to speak to Enid Todd, the daughter of Harold Larwood, who was the architect of England's controversial Bodyline series success down under.

We'll be joined by two legends of the game in Richie Benaud and Derek Underwood to tell us about a special challenge launched by the English and Australian branches of the Primary Club.

As well as ball-by-ball commentary on Test Match Special there will be extensive coverage on other BBC outlets. Mark Pougatch will be on duty for Five Live throughout the game alongside Pat Murphy, Geoff Boycott, Jason Gillespie and Alec Stewart.

On Saturday morning from 11am tune in for Five Live's new cricket comedy show "Yes it's the Ashes", presented by stand-up Andy Zaltzman. On Saturday and Sunday evening look out for the "Ashes 606" phone-in whilst you'll be able to listen to Aggers and Geoff Boycott's review of the day which will then be able to download at bbc.co.uk/sport/cricket

But for now the Ashes of 2009 are underway - and I for one cannot wait for Thursday for the next instalment.

But if you can't wait until then for Ashes action don't forget the Women's Ashes which conclude on Monday at New Road with ball-by-ball commentary on Five Live Sports Extra from 1045 BST.