There have been some stunning results by England's opponents on the hallowed turf of Lord's over the past century and a bit.

But this one, in the ICC World Twenty20 opener, by the Netherlands in their dayglo orange kit, and on a bleak, showery night, knocks spots off all the others.

And doesn't it just seem ever-so-slightly farcical now that England had begun to feel quietly confident about winning back the Ashes later this summer?

Whatever happens now, they will probably recover in time to prepare properly for that series. But it was a strange evening all round in NW8, and it wasn't just those scarily efficient floodlights - that made England look even whiter with mounting panic through the agonising climax - that were to blame. 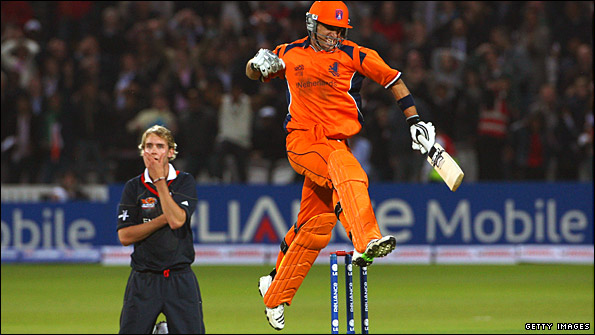 Through the sort of general chaos that bad weather lends to cricketing occasions, the opening ceremony - such as it ever would have been - was reduced to two cursory speeches. One was by ICC president David Morgan and the other by the Duke of Kent - neither the sort of celebrity figure the younger fans in the family stands might have wanted to see.

The one person present they might have had something in common with, singer Alesha Dixon, did not perform at all, though she was briefly pictured with some MCC members who bizarrely had St George's flags painted on their cheeks.

By the time the cricket did start, 20 minutes late, England had already lost Kevin Pietersen to injury - another serious blow for Ashes watchers - and Graeme Swann to an overly bold piece of selection.

Swann has been one of England's best bowlers this year - how did he lose his place in the side to Adil Rashid? Though the young leg-spinner was not disgraced by figures of 1-36, Swann - a competitive so-and-so - might have done better.

Actually, while we're at it, was there not a case for one of Dimitri Mascarenhas or Graham Napier starting this match? Even if their bowling was not to be trusted - and I have a feeling they would not have been disgraced in that department - either one may have hit a boundary or two over the closing overs. 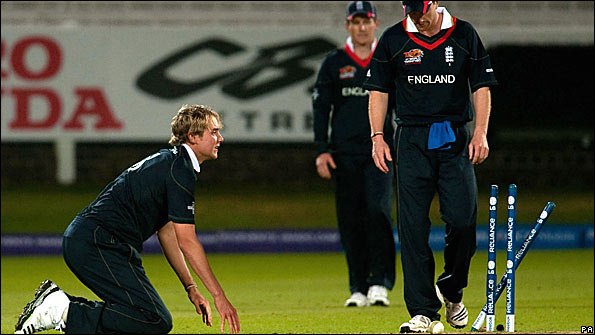 Instead, the out-of-form Rob Key - hurriedly shoehorned into the side to replace Pietersen, was there at the end - and he got nowhere near hitting a four from any of the eight balls he faced.

Teams always pledge not to be complacent when facing lesser opposition, but there was no question that the awful disease afflicted England this time.

First, after Ravi Bopara and Luke Wright had set the tone for a score of around 200, the middle order hopelessly drifted through the second half of the innings and had to settle for 163-6.

But they thought that was enough, and waited for the Dutch batsmen to throw their wickets away, blithely assuming their lowly opponents would comply.

Not a bit of it, and gradually the horror dawned on the home side that they had to pick up the match by the scruff of the neck. That was something they were unable to do.

After a poor winter, the quietly efficient coaching of Andy Flower, and intelligent captaincy of Andrew Strauss, had produced two thumping Test defeats of West Indies, and an easy 2-0 win in the one-day series to boot.

But here there was no Strauss at all, Collingwood had a really flat match - with bat, ball and as leader - and Flower simply had no time to repair the sinking ship - because the format of Twenty20 does not allow it.

This was not the worst ever performance by an England side. The Dutch not only deserve credit, they deserve massive plaudits for a terrifically bold batting performance.

But, in the context of setting an example in a global tournament they were hosting for the first time, this still might have to be regarded as the worst day for English cricket.