Chris Gayle sounded like Scott of the Antarctic when describing the rigours of playing cricket at Lord's in early May.

"The majority of the time I was batting out there, that wind was hitting me in the eye and there was a lot of water in the eyes as well".

Welcome to Chester-le-Street, Chris, some 270 miles due north of London. If you needed hand warmers to cope in NW8, you might need something stronger to get you through the day in County Durham.

England's 10-wicket drubbing of Gayle and his men in the first Test has provoked the suspicion that the 1-0 series win by West Indies earlier this year in the Caribbean was merely a false dawn.

When I asked veteran Windies commentator Tony Cozier to predict how the second Test would pan out, he was unequivocal: "It'll be the same," he said. "Over in three days."

At one point on day one at Lord's, England were 109-4 and in some trouble. But from tea onwards West Indies declined alarmingly, and it all started with six dropped catches in a single session.

"The catching has become abysmal," Cozier went on. "It's been bad for a long time and the problem is they don't have a fielding coach. The fielding drills lack energy.

"On the second morning, the bowlers played for swing. They didn't adjust quickly enough and Graeme Swann took it away from them with the bat. Everyone was saying he didn't like short-pitched bowling, but they were giving him half-volleys. 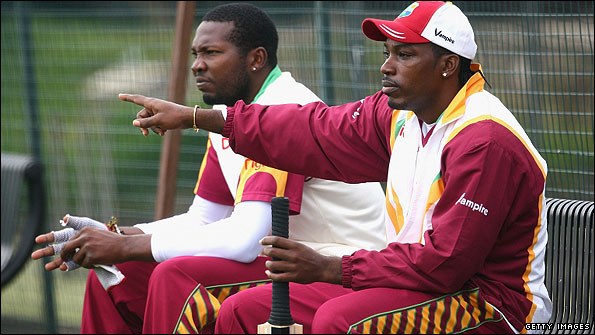 "They didn't come across him as a batsman in the Caribbean, but it's up to the coach to find out these things."

The West Indies Cricket Board were offered a great deal of money to tour England, and money is important in these days of dwindling sponsorship within sport.

The players themselves, partly due to pressure from their own representative group, are certainly being well looked after - especially those who had to cut short more lucrative Indian Premier League deals.

If one person epitomises the sudden fall from grace it is Shivnarine Chanderpaul.

He began the series ranked number one in the world for Test batsmen, and in 2007 England's bowlers found him harder to shift than the Rock of Sisyphus. But now he looks a care-worn figure, following scores of nought and four at Lord's.

"Chanderpaul would rather have a rest, and he really need one. He looks lethargic," said Cozier.

Windies pace legend Colin Croft told me: "He is a little bit tired, maybe. But he's been saving the West Indies for the past two years. We can't expect him to do it all the time."

Batsmen must apply themselves far better from numbers 1 to 11, he said. "You don't need to be expansive to be productive. You must play to your limitations. They all want to get on with it and get runs, all except Brendan Nash who is more patient and reminds me a lot of Larry Gomes. He knows you can get to 12 with six twos if you want. It doesn't have to be three fours."

Croft also revealed a fascinating conversation he had had with Alvin Kallicharran, the former West Indies captain who was one of their finest, and arguably most elegant batsmen in the 1970s.

Kallicharran had spotted a fundamental flaw in the techniques of the batsmen, who are presenting the blade of the bat at the ball from a crooked angle - rather than playing at the ball in a straight arc from behind.

What of the bowlers? Andrew Richardson, the tall Jamaican quick, is in line for a possible debut with Jerome Taylor looking a shadow of the man who destroyed England at Sabina Park in Jamaica.

"He doesn't have any fat on him," Croft said of Taylor. "People confuse being thin with being fit but that's not the case. Look at big guys in the past like myself and Joel Garner."

I spoke to both Croft and Cozier before Gayle's astonishing outburst disowning both Test cricket and the West Indies captaincy on Wednesday.

Other Windies players not selected for the Tests, Dwayne Smith and Dwayne Bravo, are having an absolute ball in the IPL, and one can understand why Gayle might wish he was still there.

But somebody has to provide a motivating force at Chester-le-Street, and that somebody is surely the captain. Or perhaps not.